Ben laughed at the dirty joke Nick told. Nick’s younger sister, Sofia, hit her brother and scolded him for being crude. She gave Ben the evil eye including him in her reprimand. Ben didn’t understand why she always tagged along because she inevitably got mad at something the two of them said or did.

Even with the scolding, Ben enjoyed her company. Sofia was like a sister to him. She never came onto him like all the other girls which was a relief, not that he minded the other girls attention, but he wanted to keep being her friend.

Plus, she helped him a lot with homework and was a damn good fisherman. In fact she was the only one that ever fished with him anymore, Nick had long ago tired of it. Sofia had even gotten him into gardening

He would miss his quiet times with Sofia, but he looked forward to getting out of Twinbrook even more – and away from all of the small town drama.

His mother and father divorced after nineteen years of an abusive relationship, but not before his family became the gossip of Twinbrook, even making the local news.  His father had been in therapy for years to help him learn to control his behavior as was his mother, to deal with the effects of his abuse.

His parents had both remarried after their divorce and even had kids with their new spouses. So not only did he have a stepmother he tolerated and a step father he hated, he also had an older brother who thought his shit didn’t stink, a younger sister that he never saw, an adopted sister, a half sister and a half brother. It totally sucked. Nick and Sofia were more like family than any of his brothers and sisters.

Ben looked around the yard at his mother’s house. They were all here at his stupid graduation/going away party. Every. Last. One. Of them. And then some. He thought about each one as he looked at them.

But that life would soon be over. He had graduated and was going to college. He just had to get through this damn family celebration first – only a few more hours left before he could escape to the Karaoke Bar along with Gemma, Nick and Nick’s steady girlfriend, Val. 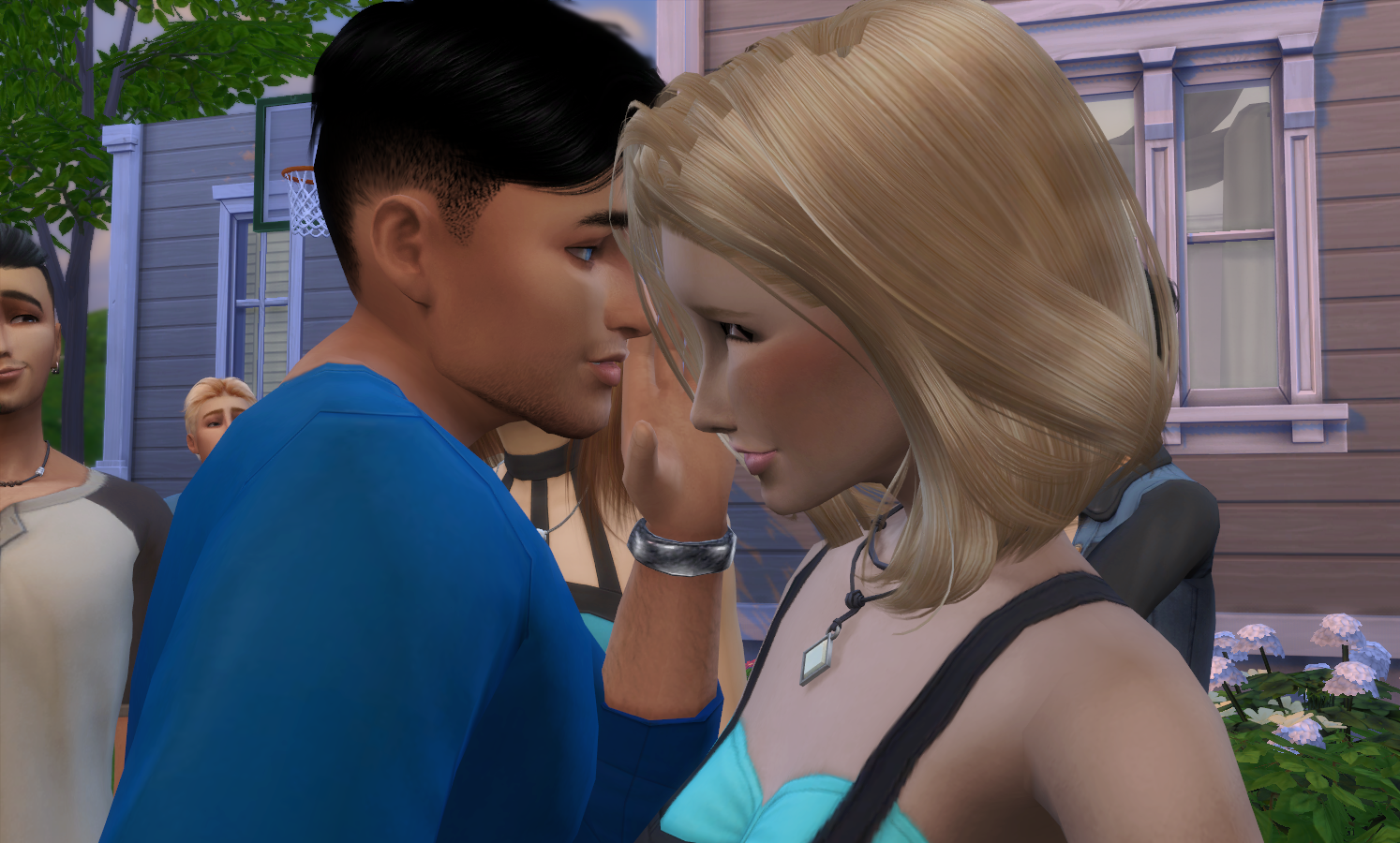 Gemma had been glued to him all day. She tugged on his arm and pouted up at him. She wanted to get him alone and was obviously as bored with the party as he was. The feeling was mutual, on both counts.

He heard Sofia groaning and turned and smirked at her. Gemma snickered and said, “Shut up Sofia. You’re just jealous because no one wants to kiss you.” 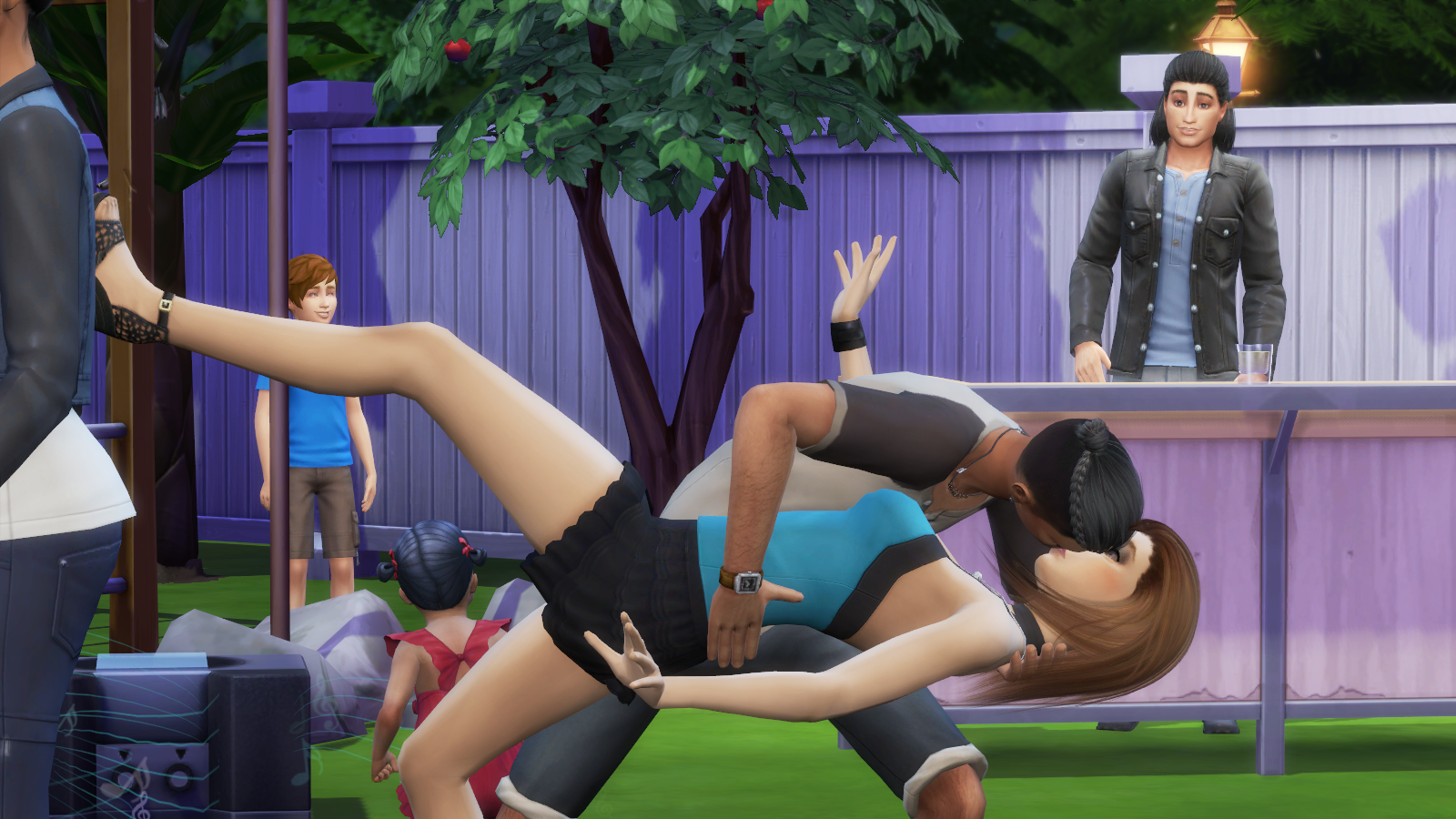 At that, Nick dip kissed Val to get back at his sister for fussing at them earlier. When they came up for air they were all laughing.

Sofia kicked the dirt with her tennis shoe, “Nick, you and Ben are incorrigible!” she complained, “I don’t know why I bother with either of you.”

Ben was a little miffed at them mocking her and tried to lighten the mood. He stuck his lip out in a fake pout. “Because you luuuvvv us?” he asked. Then his eyes went wide, he smiled and said, “Hey, I know! Sofia, maybe you should go with us tonight. I bet there will be someone there you can hook up with!”

“Ohh yes!” squealed Gemma before Sofia could protest, “I brought a couple of outfits because I couldn’t make up my mind. You can borrow the one I don’t wear. I bet we can fix you up! Val’s great with hair and I can do your makeup. Come on Val, let’s do this! Let’s make Sofia gorg!”

Ben watched in awe as Gemma, apparently on a mission, finally left his side. She grabbed Sofia by the arm and dragged her into the house, Val hot on their heels.

The look of abject horror on Sofia’s face was priceless and he burst out laughing before quickly trying to swallow it down. Oh Shit, what have I done? he thought. If looks could kill, Ben and Nick would have died instantly from the poison daggers aimed directly at them from Sofia’s terrified eyes. 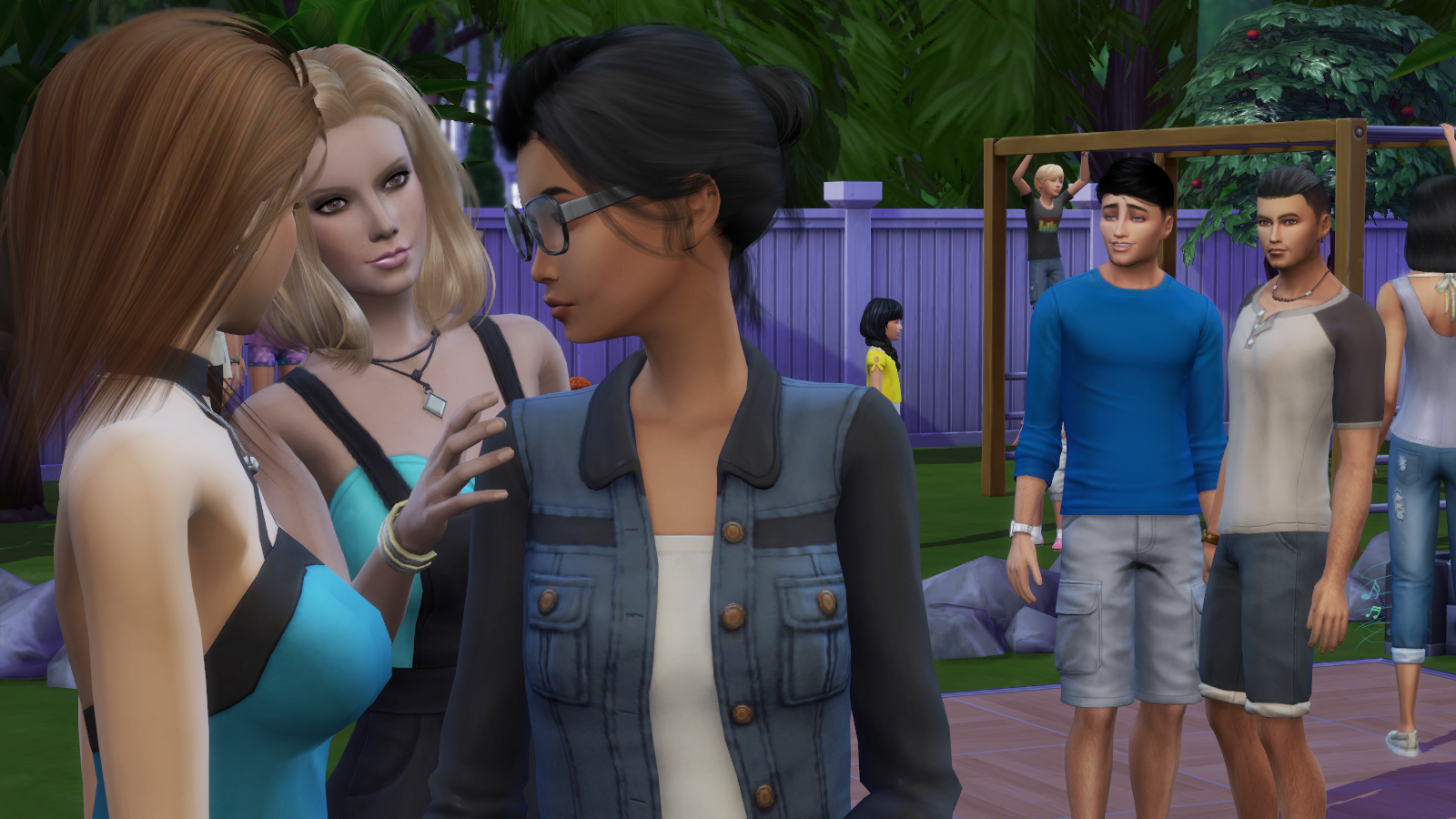 Nick looked as horrified as his sister. “Thanks a lot Murdock! Sofia should just stay here and hang with your folks. You know she is out of her league with those two. Now I will only worry about her all night.”

Ben punched his arm playfully. “Let her have some fun Nicolas. She’s a big girl now. Besides, I saw how Val was looking at you. You don’t want to spoil your opportunity to score worrying about Sofia. She’ll be fine. I’m getting my ‘going away present’ from Gemma tonight too – one way or the other.”

“Geeze Murdock, is that all you ever think about?” asked Nick, “Don’t you ever want to settle down? Have a serious relationship? I mean I even thought about asking Val to marry me before we leave next week. I’m going to miss her.”

“Dude! Get a grip! I’m never getting married and never having kids. Not worth it. You are looking at a confirmed bachelor for life,” said Ben puffing up his chest, “I will say goodbye to Gemma when she leaves tomorrow morning and I will be just fine. Think about all the new girls – no women – we will meet!”

Nick just groaned so Ben went on, “I can’t wait to get out of college and really be on my own. Running my own business. Doing what I want, when I want, with who I want. A nightclub might be fun, but I think I want to break the Murdock/Chapman/Neilson mold. Maybe something outdoors. Hey, I know, I will buy a fishing boat and take groups out deep sea fishing. Then I can use it to pick up chicks in the off season. We could start a business together”

“You’re on!” said Ben always up for a challenge.

While they were playing horseshoes, everyone started leaving. They had to get the kids to bed. That was just fine thought Ben as he said bye to everyone. 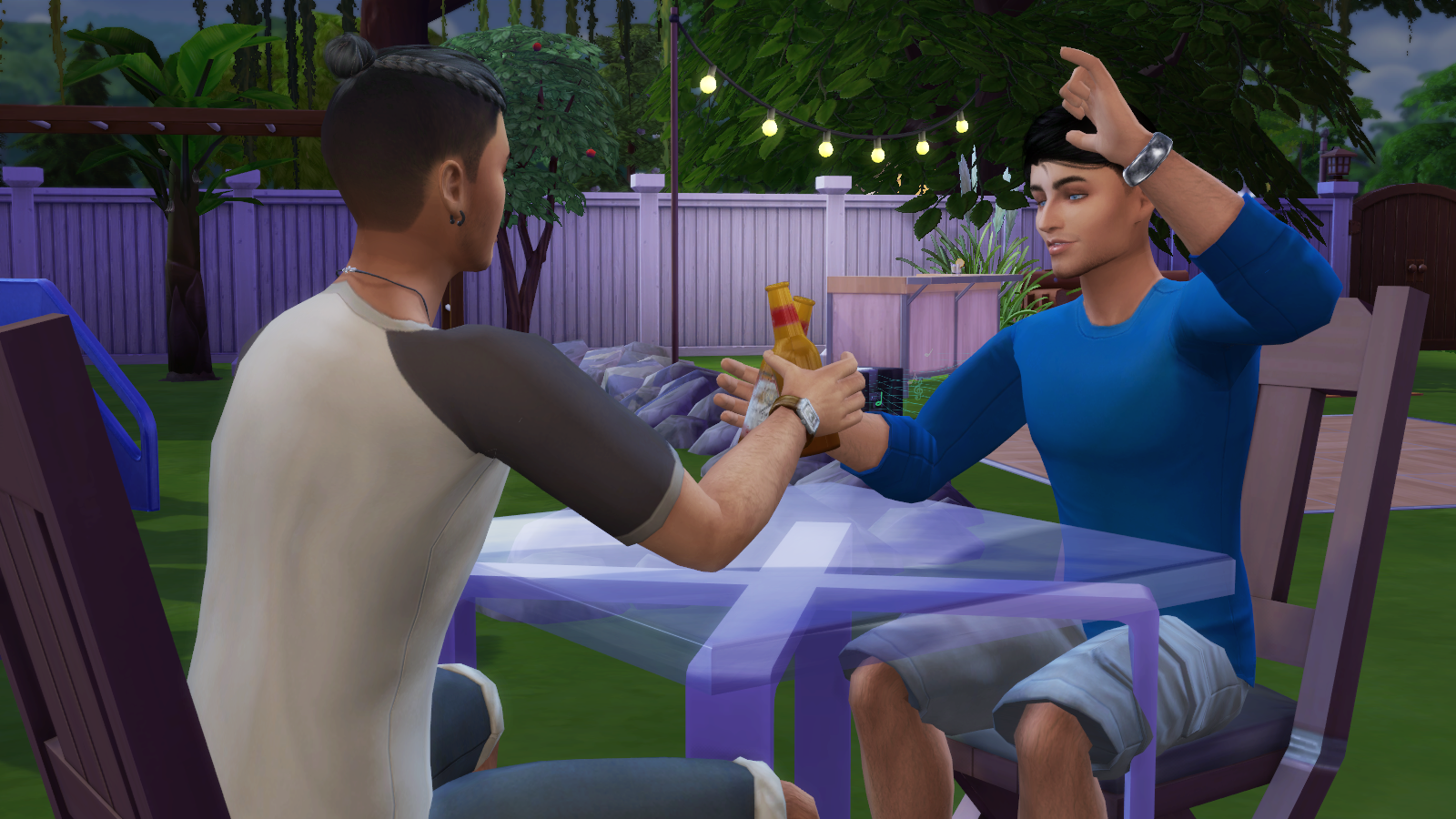 As the last of them left, Ben grabbed a beer out of the ice chest and tossed it to Nick. They sat down in the suddenly quite backyard and Ben offered a toast to their new freedom. “Here’s to tonight and the next and the next!”

Instead of chugging his beer Nick let out a low whistle…  “Damn!” he said as his eyes lit up. Ben got up and turned around to see what he was looking at.

The girls had finally emerged from the house ready to go.  Gemma and Val looked hot. The two got up and walked towards their dates for the night.

Both Ben and Nick suddenly stopped in their tracks when Sofia walked out from behind the two girls.

Sofia? thought Ben, man she cleans up good. But he didn’t like it. Not at all. Maybe because he knew she would attract the wrong kind of attention and she was totally inexperienced. Or maybe he was just worried about Nick’s reaction.

Regardless, when he looked at her his smile quickly turned upside down and he spouted off without thinking. “There is no way in hell you are going anywhere looking like that!”

At his words and the sudden change in his expression, Sofia turned around and ran back into the house.

“Shit…” mumbled Ben under his breath and chased after her.

Gemma threw her arms up, “What the hell Ben? She was hot!”  Ben ignored her and kept going after Sofia.

Nick grabbed Gemma’s arm.  “Let him face the music Gemma. He deserves it.”

Sofia ran in the bathroom and locked the door. “Sofia!” he called through the door, “I’m sorry. You look awesome.” 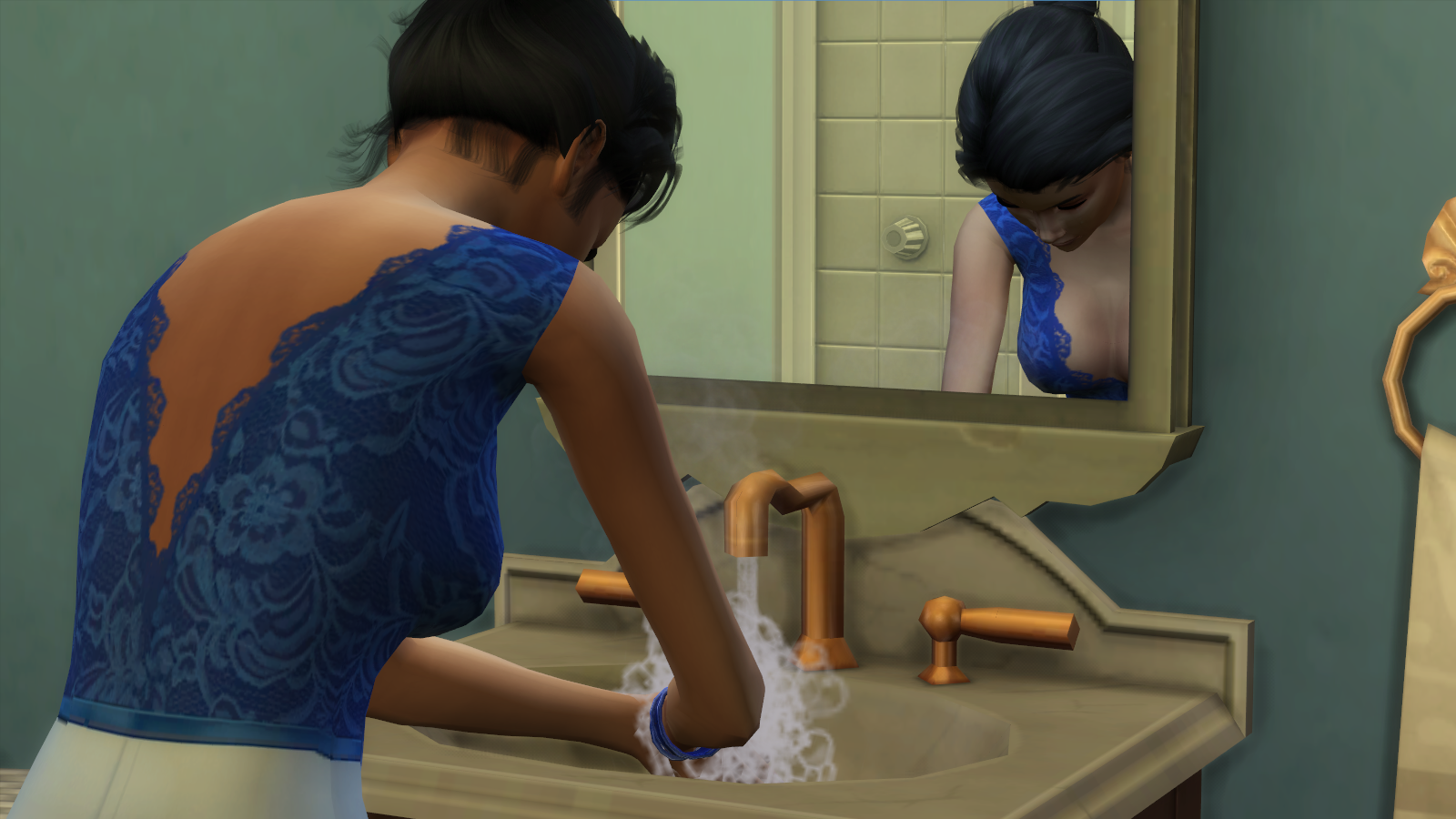 He was answered with a sob and the sound of water running.

“Sofia don’t cry, I was just shocked is all. Please open the door,” begged Ben.

“I look ridiculous. Go away. Go to your stupid party,” she said still crying.

“I’m not going anywhere until I’m sure you are okay. Unlock the door – please Sofia.” Ben heard the click of the lock and his shoulders slumped in relief. He turned the knob and opened the door. 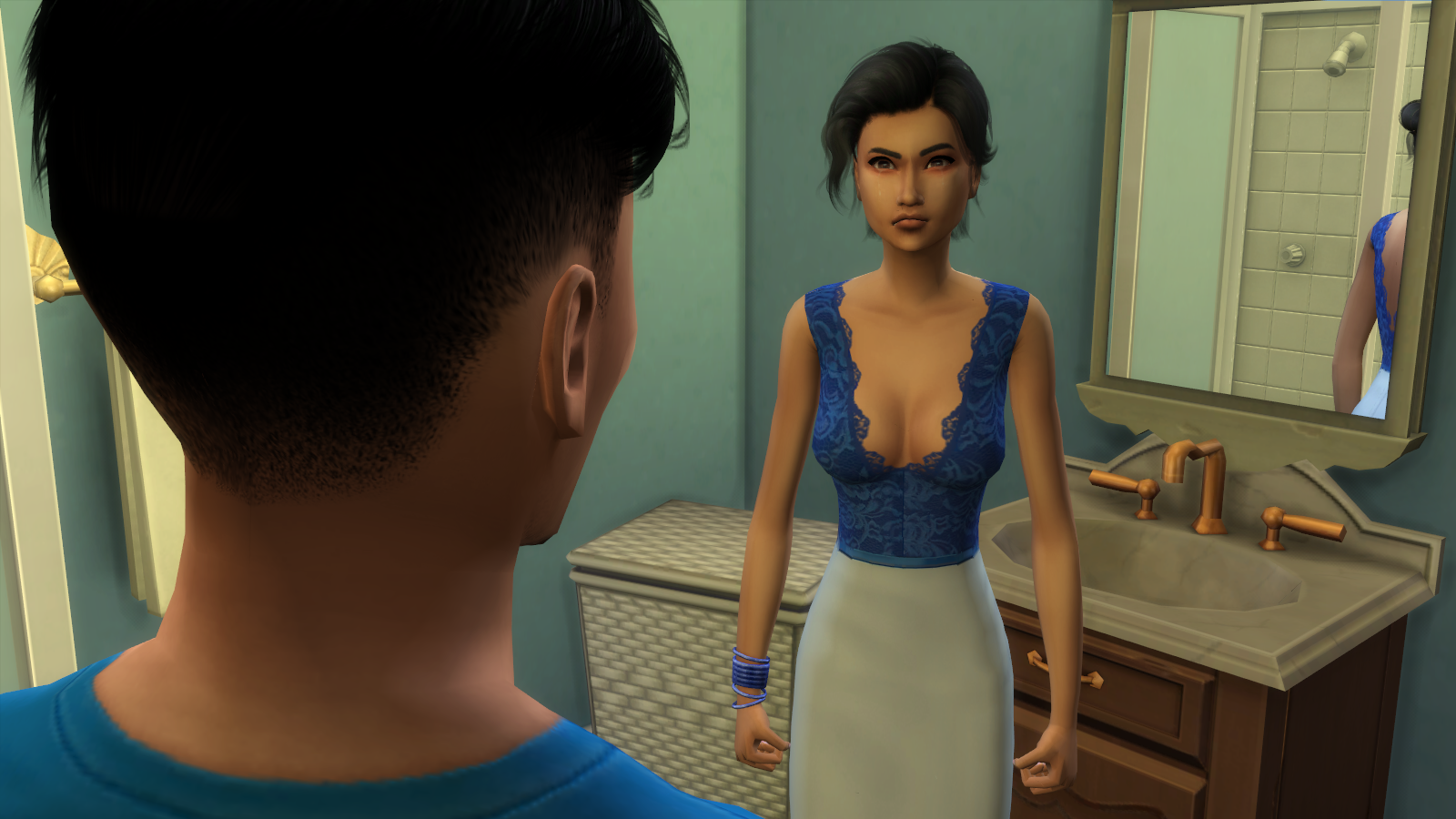 Sofia had washed off the makeup and pulled her hair back into a bun. She still didn’t have her glasses on and he could see her eyes were red from crying. She hadn’t changed clothes yet and the tight short dress she still wore did nothing to hide her curves. Curves Ben had never noticed before. He tried to stop himself from looking but he was too late.

Sofia noticed and tugged self consciously on the hem of her dress which only served to pull it down in front enhancing her ample cleavage. He forced himself to meet her eyes, then pulled her to him in a hug. She struggled at first but then relaxed and let him comfort her.

“You are beautiful Sofia,” whispered Ben as he rubbed her back, which was bare because of the revealing dress. She was so soft and she melted into his embrace.

When her sobbing had calmed, he pulled back and looking into her eyes he added, “Never, ever think you aren’t.”

Sofia licked her lips, swollen from crying. Ben looked at her quivering lips, just an inch away and had an overwhelming urge to kiss them better. Her tongue snaked out again and it nearly undid him. He moved ever so slightly closer effectively breaking the spell they were both under. 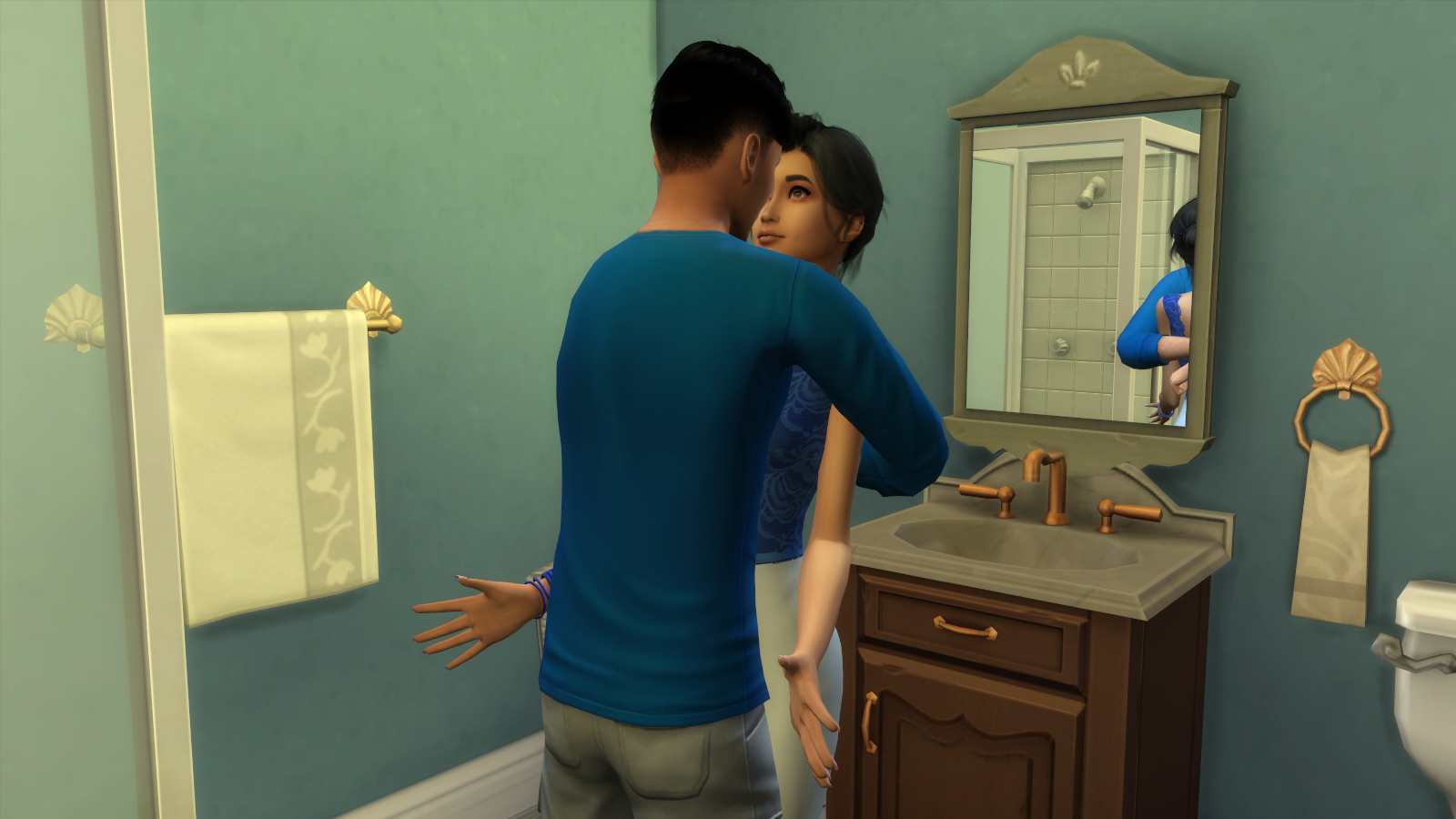 Sofia suddenly jumped out of his arms embarrassed and started talking fast. “I’m sorry Ben. That was silly of me. I don’t know what I was thinking. You and Nick – ya’ll take Gemma and Val out to the club. I will stay here and help your mom clean up. Then I will catch a ride back to Twinbrook tonight with Reese and Brooke or one of the others.” 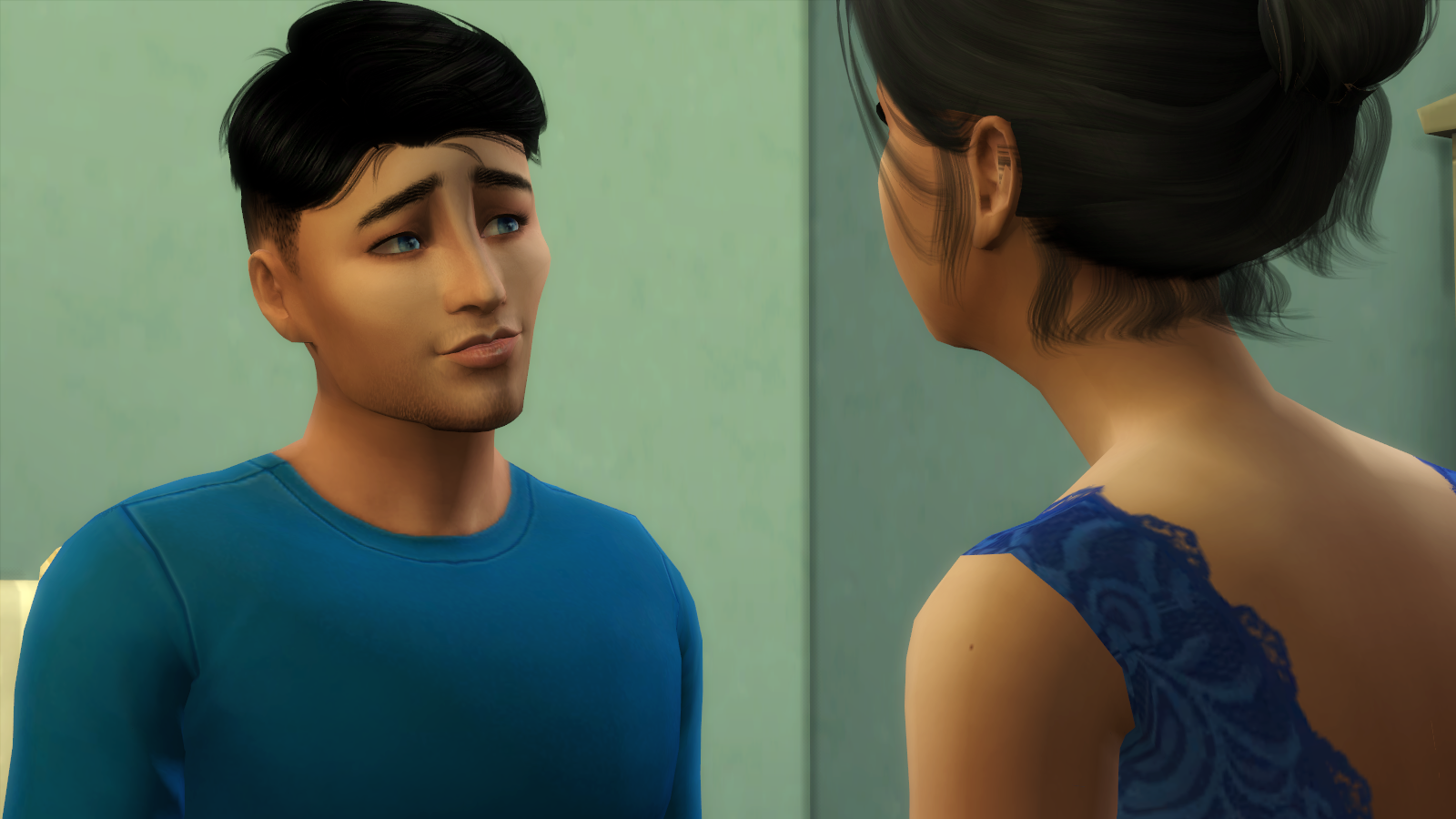 “Sofia, no…” Ben started to protest, but Sofia stopped him.

“Congratulations Ben,” she said with a sigh, “See you around, if I can find my glasses that is. I don’t know why, but I’m gonna miss you two goons. Tell Nick I said goodbye.” She stood on her tiptoes and kissed Ben on the cheek leaving him speechless and wondering what the hell had just happened between them. 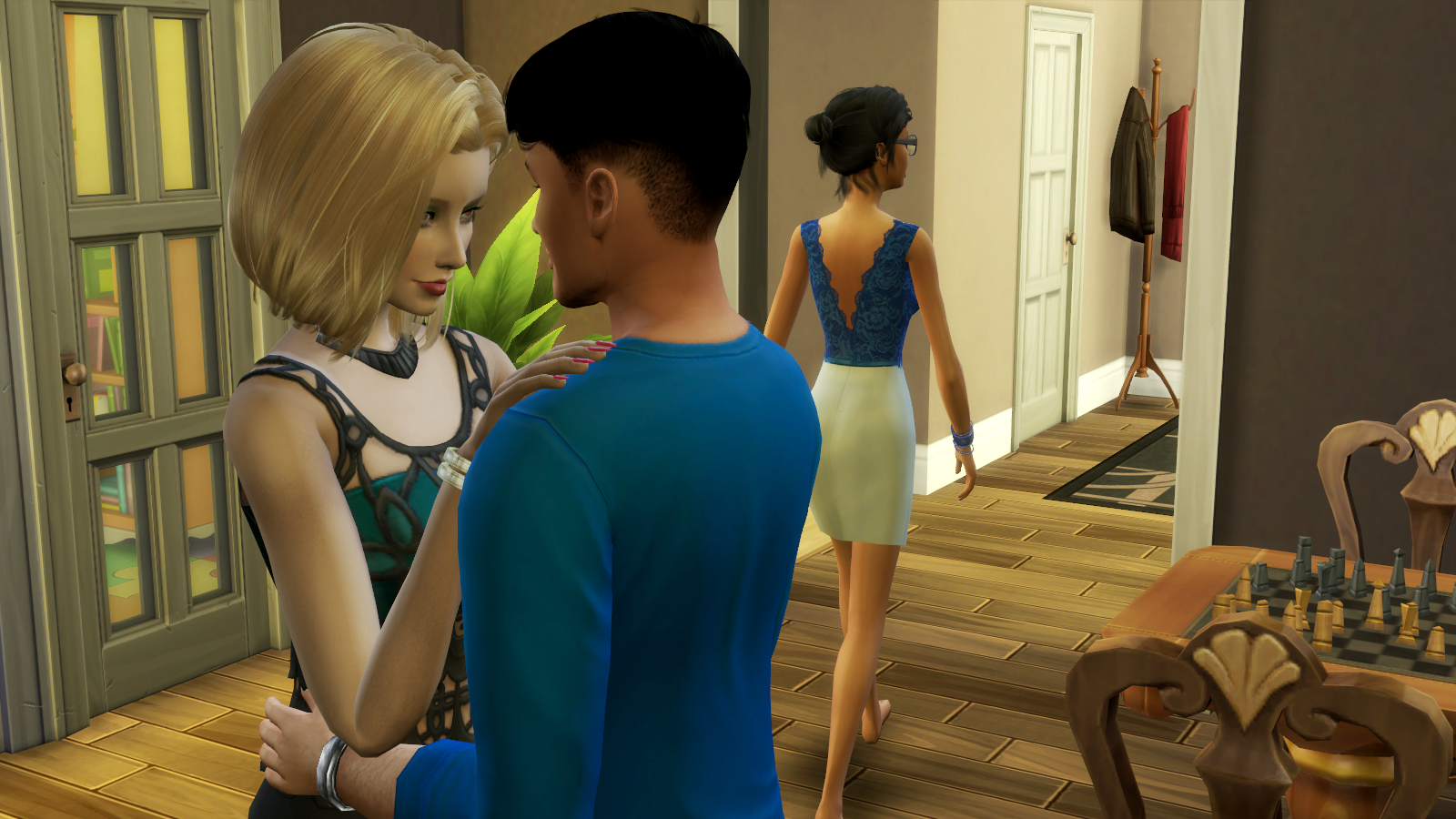 As Sofia was walking off Gemma walked in and grabbed him around the neck, “There you are handsome,” she cooed and nodded towards Sofia. “Looks like we are once again a foursome. It’s a shame. She cleans up good. I guess she did get some of her brother’s genes after all.”

“Yeah,” was all Ben could say still thinking about the almost kiss.

Gemma wrinkled her nose. “Ewww, Ben, go shower,” then she purred, “I would get in with you, but I’m already ready – to go.”

Ben didn’t let her go. Instead he kissed Gemma full on the mouth. He needed to get Sofia out of his head. Gemma eagerly parted her lips for him and he immediately pushed his tongue inside, hinting at what was going to come later that night. At the same time he grabbed her from behind and pulled her up against him showing her just how ready he was. Gemma moaned into his mouth.

Ben broke the kiss and smirked at her. His going away present was wrapped and ready and he fully planned to unwrap it that night.

A/N: Thank you for reading! I hope you continue to join me as we follow Ben on his journey. Raise your hand if you are already mad at Ben. Yep. I knew it!