Grace and Ben wanted to get married before school started. It was just two weeks away. They were sitting in the kitchen, drinking coffee and planning a quickie wedding.

“Ben, aren’t you going to invite your family?” asked Grace.

“No,” said Ben flatly, hoping to shut down her questions. 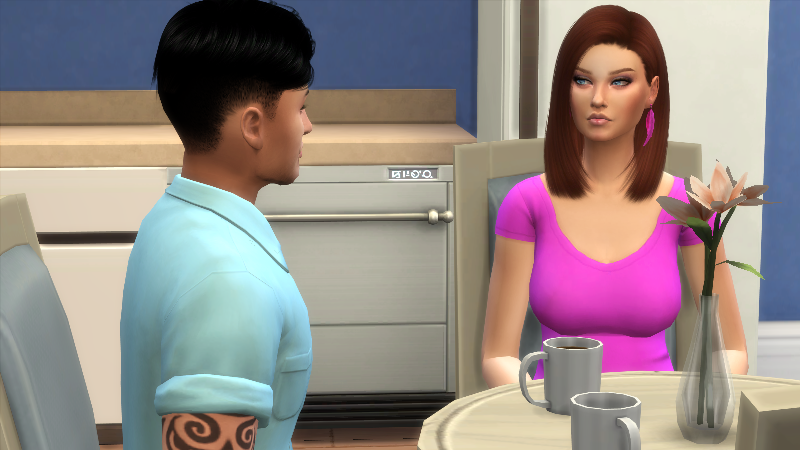 He hadn’t told her about the failed phone call and didn’t want to go there. “Just no Grace. They wouldn’t be able to make it anyway.”

“Is it because of the plants?” she guessed.

“No!” he said, harsher than he intended. He just didn’t want to talk about it.

“Ben, we are getting married. You have to open up to me. You promised I would have all of you, remember?”

Ben winced at her words. She was right but it didn’t make it easier to think about. “Grace…we don’t get along. That’s all,” he said, softening his tone.

“No Ben. There’s more….Oh God. That’s who hurt you so bad that you close yourself off. Ben, tell me. Please, share it with me and let me take some of the pain from you. I’m not going anywhere….Wait, you’re not a serial killer are you?”

“So, non-serial killer, future husband and father of my son, spill.”

He looked at Grace and knew. He couldn’t put it off. He had to tell her. But he wasn’t going to mention the phone call. He said some horrible things to both of his parents that he couldn’t take back. Grace would be horrified. But at least they had backed off.  He let out a breath. “I need a beer first.”

“That bad. But Grace, don’t feel sorry for me. I am happy now and it’s really okay.”

Ben grabbed a beer and sat down on the couch with Grace. He took a long swig and began his story.

He told his future wife about things he hadn’t let himself think about in a very long time. She unconsciously rubbed her expanding abdomen as he recanted his story.

The story of an eight-year-old little boy, who along with his baby sister and teen-aged brother, were ripped from their home by their mother. How they became homeless. All because his asshole father had begun to abuse his mother and his brother.

He told her how his mother became pregnant while still married to his father. Meeting his uncle but not knowing they were related.  How his teenage brother’s two babies came to live with them.  And finally how his mother adopted another little girl.

Grace crawled into Ben’s lap. She must have instinctively known that he needed that physical closeness. When she settled, he rubbed her belly.  Keeping grounded in the present helped him have the courage to continue his story.  The story he had never fully shared with another person. Nick was the only other person that knew about his father and he had only just found out.

He told her how he had felt confused and alone.

How he ran away from home one rainy night hoping his Uncle would let him live with him.

How he accidentally reunited with his father that night. How he thought he finally had found someone that cared about him.  How he pushed the physical abuse that caused his parent’s separation into a deep corner of his mind so he didn’t have to deal with it. 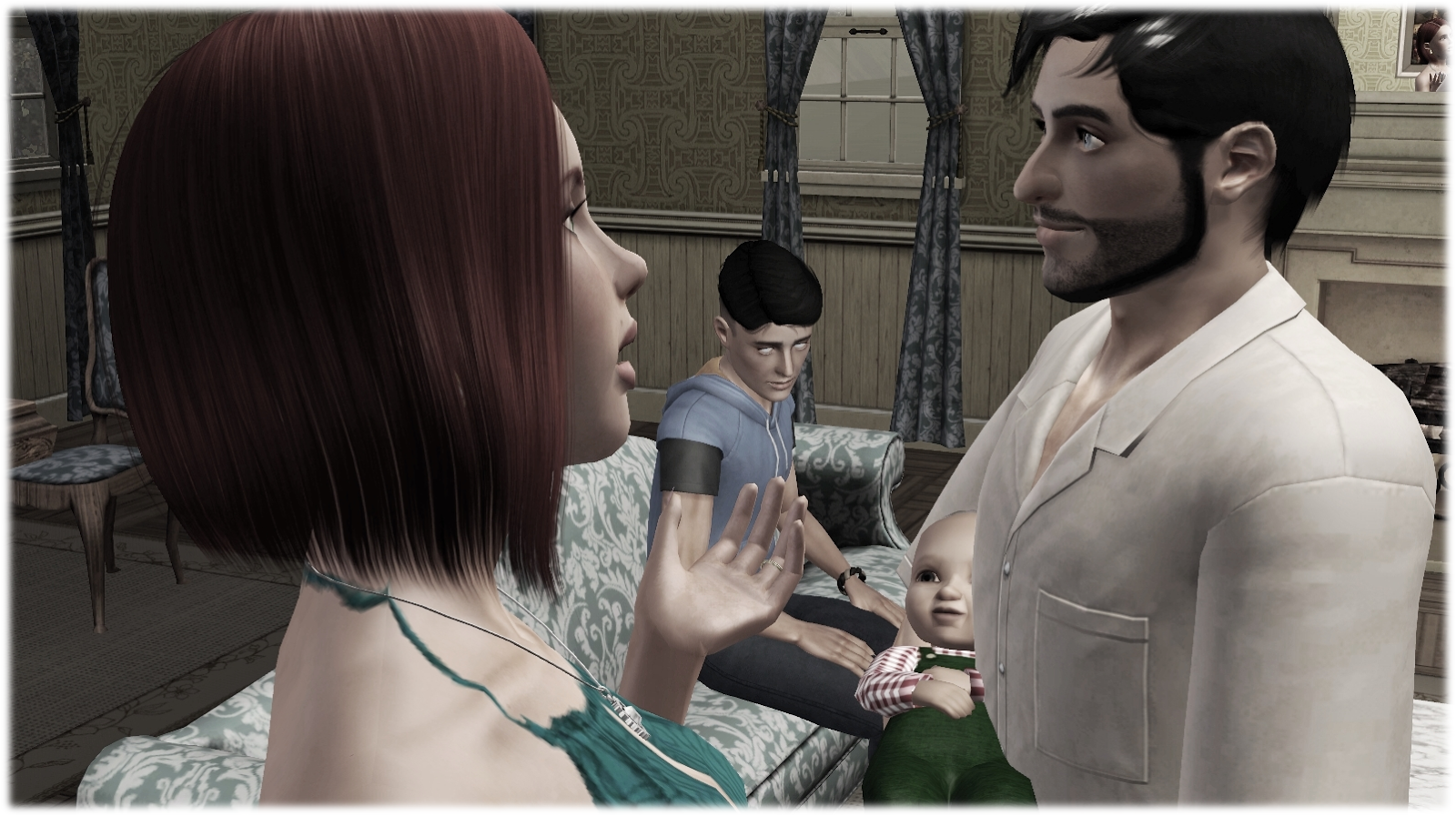 But it didn’t work. His father remarried and they had a new baby and Ben became an afterthought.  How he felt betrayed when he finally realized Reese was telling the truth when he told him that their father had hit him and their mother.

Grace turned around and kissed him.

“I love you,” she whispered. “You will always have all of me Ben. We won’t repeat the sins of our parents. No one is forcing us to be together. You are not your father. And I am not your mother. You are my Benjamin and I am your Grace. And this,” she said placing his hand on her growing belly, “this is our son who will always know how much he is loved. Loved by both of his parents.”

Ben leaned on Grace and put his hand on her belly. “I love you both too. Your Grandmother was right, sharing helps.” He took a deep breath. “So, your turn. Tell me about your parents.” 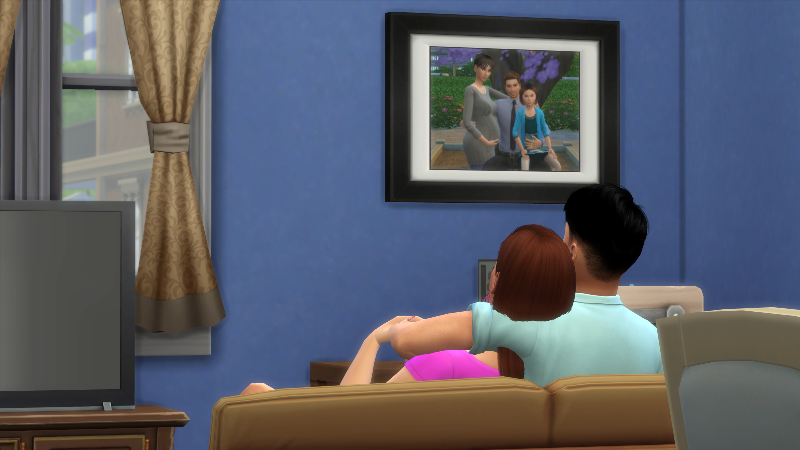 Ben sat up and Grace snuggled in closer to him as she looked at the picture she had hung on the newly painted wall. “My story is much simpler than yours. I was five and we were on the way to my kindergarten open house. It started raining right after we left our house. I can’t even remember it anymore – our house.

‘The picture of me and my parents, it was taken the week before the accident. That’s the only reason I can remember what they look like. My mother was eight months pregnant. It was a little girl. They were going to name her Kelly. I was so excited to become a big sister. A car hydroplaned and hit us head on.”

Ben’s heart was breaking for the five-year-old Grace. “You don’t have to finish.”

“It’s okay Babe. Remember, Gran said sharing helps. And besides we are getting married. You shared your past. I need to share all of mine. No secrets.”

Ben swallowed down his fears and tried to pull her closer, looking up at the photograph imagining what it must have been like for her.

Grace snuggled into his arms and continued, “I don’t remember anything after leaving for the school. I woke up in the hospital with a few bruises and Gran sitting by my bedside.

“I didn’t understand my parents weren’t coming home until after the funeral. Gran was so great. She comforted me when she must have been in so much pain herself. Gran is such a strong woman. Maybe having me was a comfort to her too.

“Gran was 65 when my mother and father died. My Grandfather died long before I was born. So it was just me and Gran. You see, Mom was their miracle baby and only child. Losing her daughter and son-in-law and unborn grandchild must have been devastating. 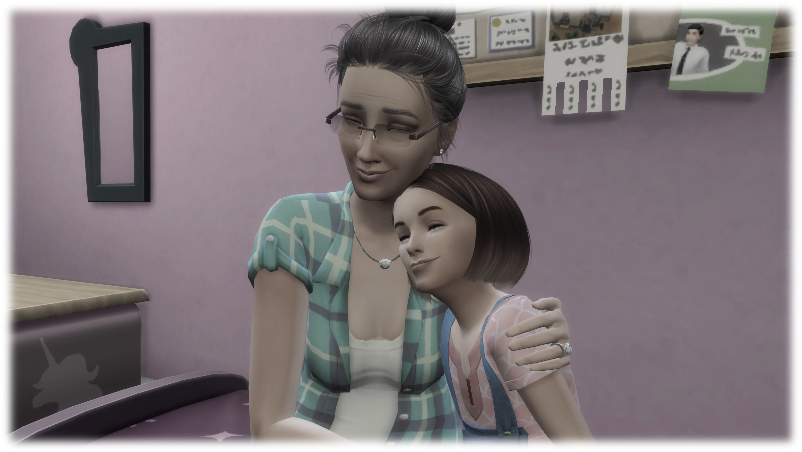 “Gran used to say having me kept her young. But when she turned 76 her health began to decline. During my junior year of high school, she was no longer able to get around enough to cook or clean. She really needed assisted living but refused to go because the state would put me in foster care. As soon as I graduated from high school, she asked to be moved. It broke my heart. But she knew I couldn’t leave her and go to school. That was four years ago. I still call her every week.

“Anyway, Ben, whatever you believe, family is important. You should try at some point to figure out how to reconcile with yours. Maybe our son will be the catalyst for that.”

She was way too good for him. So strong. Ben turned her face to his. “God saved you that rainy night for me. My angel. I don’t know why. I do know I will be eternally grateful. But Grace, honestly, what I don’t know is if I can forgive the last 12 years of hurt and pain. Right now, I don’t care if I ever see them again.”

Grace looked so disappointed and it hurt that he caused that. “That’s so sad,” she said, “but, deep down, I don’t think you really mean it. If they were truly nothing to you, it wouldn’t hurt so much.”

It made Ben uncomfortable to talk about his parents, step-parents, Aunt and Uncle, brothers and sisters, nieces and nephews. So many of them and he didn’t belong. “I don’t know,” he said, “Maybe. I just don’t like to think about it. I get too angry.”

“Okay. But after our little boy is born, together, the three of us can try. Our little boy should have his grandparents – he should know all of your family. My parents are dead Ben. They would have loved you and our baby. And Gran….if I hadn’t had her….I don’t…”

“Shhh,” he said moving closer, “Let’s don’t talk about this anymore. Today, I can only focus on my new family. Making a new life for myself with you, my amazing fiance. You and our little boy are more important to me than the rest of my messed up family.”

Ben closed the remaining distance and kissed her. Grace was his future.  When he was with her, he didn’t feel pain. She made him whole. He didn’t know if he would be able to do what she wanted and it scared him.  He was afraid if he didn’t, she might leave him or grow to hate him. That was worse than trying to talk to his mother and father. For Grace, maybe, maybe he could try one more time. But not yet. Not now.

Go Back to Chapter 26