Ben leaned over Sofia’s should to look at what she was pointing to. The scent of her lavender shampoo and soft perfume assaulted his senses making it hard for him to concentrate on what she was saying.  “Look,” she said, pointing to the drawing, “right here we can place the memorial. It will be inside the hall. We can have her picture on the plaque. This would be great for Cole to remember his mother.”

Being this close to Sofia was doing things to his body he hadn’t felt in a long time. Even talking about Grace didn’t temper his reaction to her. She smelled so good. He wanted to touch her hair and kiss her neck. “Sofia?” he said, his voice husky with lust. 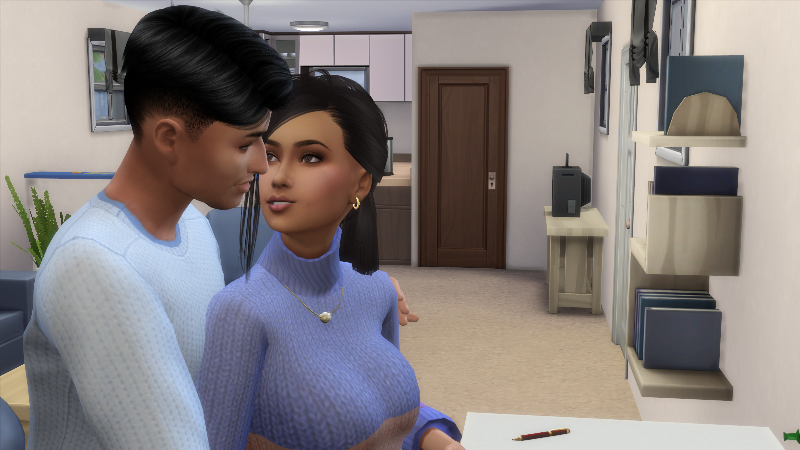 She turned and looked at him, her face, her lips, just inches from his. “Ben?” she asked, her voice betraying her as well.

He couldn’t hide the desire in his eyes so he swallowed hard and tried to look away, “That’s a good place,” he said, his voice not much more than a whisper.

Sofia turned to face him and his resistance was gone. But he couldn’t make the first move. It was up to her. She reached up and put her hand behind his neck, gently stroking his cheek with her thumb. 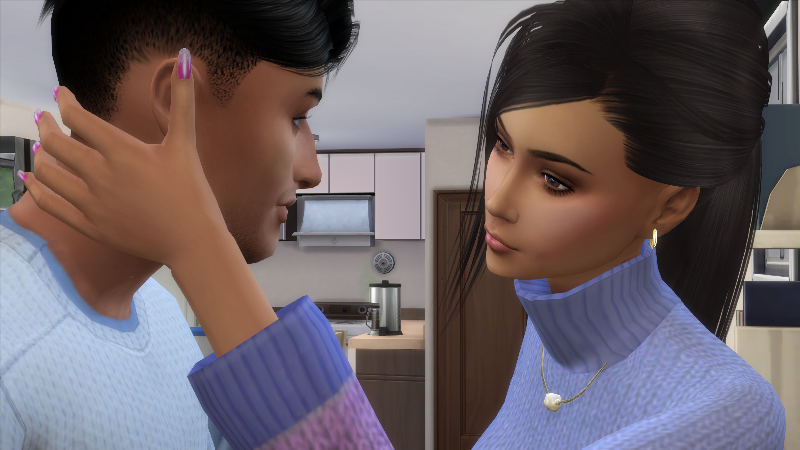 At her touch, his breath started coming in short pants. She bit her lip and he was instantly hard for her – he almost groaned. But she was thinking – she looked so sexy when she did that. She released her lip and her tongue snaked out to quickly swipe at her lips. At the same time she began to gently pull him towards her. Ben groaned out loud this time in anticipation. Her eyes were focused on his mouth and his heart was racing. She’s going to kiss me, he thought, she made up her mind. He had too. He desperately wanted to feel her soft lips on his.

The door banged open and they jumped apart. Jesse! Fuck. What is he doing here?  wondered Ben. 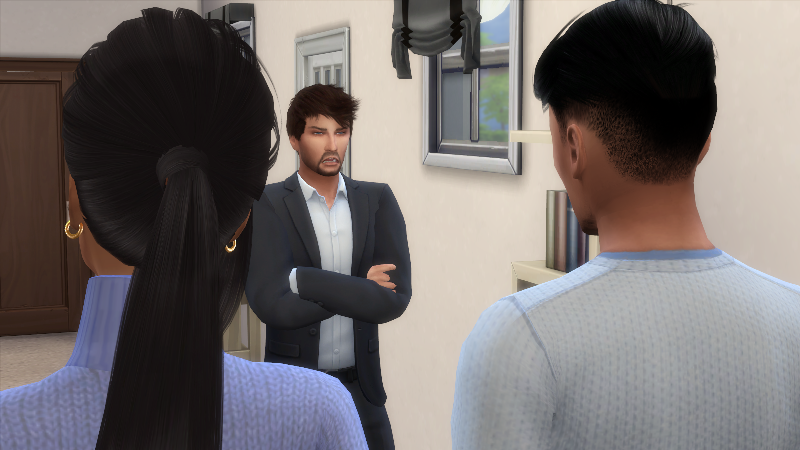 “You goddamned womanizer!” yelled Jesse before either of them could say a word. “Get your filthy hands off of her. Get over here Sofia, you little tramp.  When I saw you two in the coffee shop, I did a little checking.”

“You were following me?” asked Sofia, sounding like a little mouse, glued to her spot.

Ben was incensed. He wasn’t going to let this prick talk to Sofia like that. 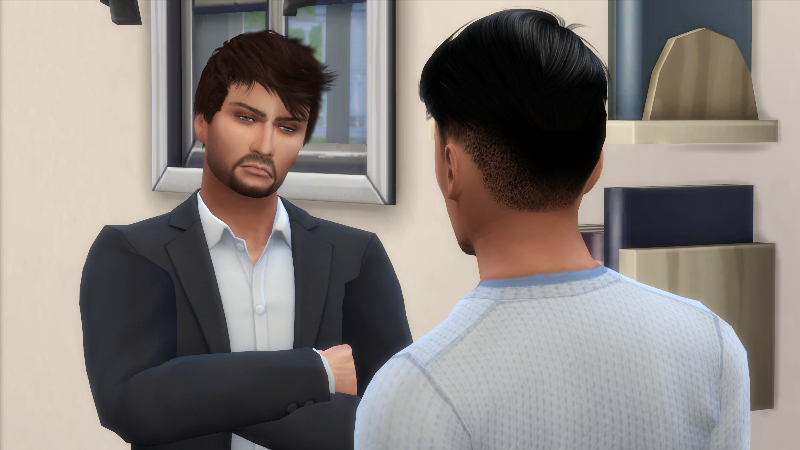 Jesse ignored Sofia and continued ranting to Ben. “When I found out you worked here too, I knew you would be trying to get in her pants and I wasn’t wrong.  She’s mine – asshole. Sofia! I said go – get your ass in the ca…..”

Ben punched him before he could say another word.

“Ben!!! No!” screamed Sofia, and ran over to where Jesse lay in the floor. “Oh God. Are you okay Jesse? There’s nothing going on. I promise! We were only talking, looking over the plans. We went to the coffee shop for coffee!”

Leroy walked in while Sofia was helping Jesse off the floor. “What the hell?” barked out Leroy. 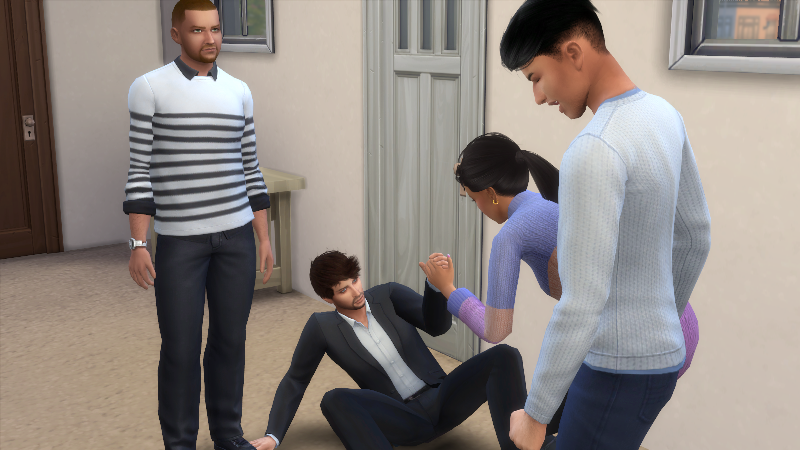 “Your employee just decked me!” said Jesse, his face turning almost as red as his eye where Ben hit him. “I’m suing your company for damages! Come on Sofia, let’s get the hell out of here.”

Ben shook out his injured hand. “Pia….you can’t let him talk to you like that. He’s crazy.”

“I’m crazy?” asked Jesse, making a show of dusting off his pants. “You fucking sucker punched me after making moves on my girlfriend.”

Sofia looked at Ben with frightened eyes. “It’s okay Ben,” she said softly, “Let me get him home. Leroy…?”

“Take the day,” said Leroy, “We can talk tomorrow.”

Sofia put her arm around Jesse and Ben watched in horror as she walked out with him.

After they left Leroy turned on Ben. “I trusted you! And you hit him! This is what I was worried about when I hired her. What gives Ben? Am I going to have to fire you?” 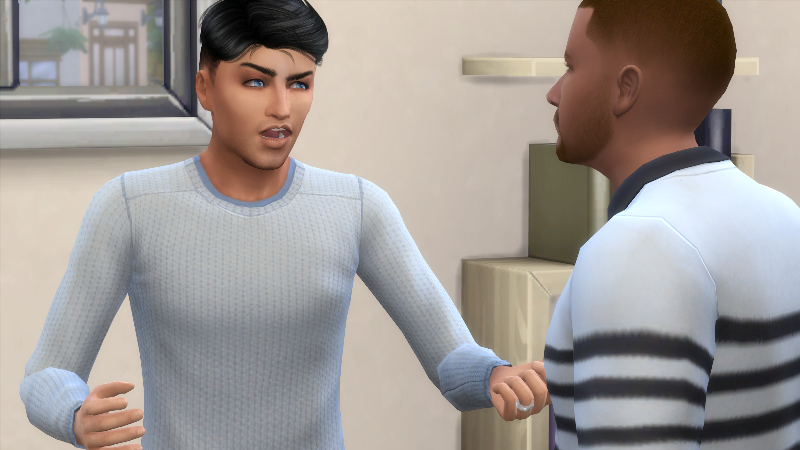 Leroy was taking Jesse’s side too! What the hell. “Fuck Leroy. No! He was talking trash to Sophia. He called her a tramp. And accused me of trying to seduce her. We weren’t doing anything.” Yet. Five minutes later and it may have been a different story. He knew Sophia wanted to kiss him as much as he had wanted to kiss her so why did she leave with Jesse? 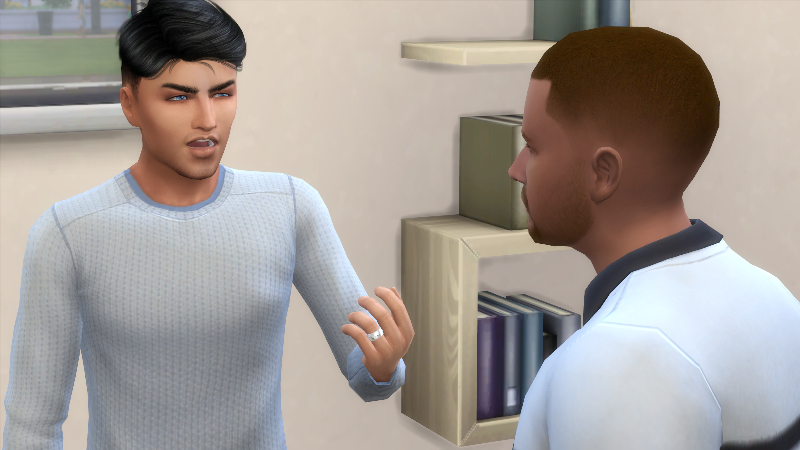 “He went into in a jealous rage and I just couldn’t stand there and let him verbally abuse her.” He shuddered when he said the word abuse. It brought back painful memories. “He hates me and I get it. But he can’t talk to her like that. It’s wrong. I don’t get him, or why she left with him after he talked to her that way.”

Leroy took a deep breath. “Okay. I believe you. But Ben, if he sues…I’m not sure what I can do.”

“It’s his word against mine. Sofia won’t go against me.”

“You sure about that?”

“We’ve been friends our whole life and…”

Yes. I more than just like her, thought Ben, but she had made her choice and it wasn’t him. “Yes…I mean, she’s a really good friend. That’s all.”

“Ben, Come on. I see how you look at her and how she looks at you when you aren’t looking. It’s been almost 2 years. It’s okay to have feelings for someone else. But right now, I’m more concerned about Jesse’s behavior. You of all people should see the red flags. If he’s this controlling now, it will only get worse. Maybe you can talk to Nick about it and he can talk to her.”

That’s what it was, thought Ben, he was controlling her somehow. He prayed he wasn’t physically abusing her. He didn’t think so, but then, she rarely spoke about Jesse. “I don’t want to bring Nick into this, not yet anyway. Sofia wouldn’t appreciate it. But, you are right, he is sending up red flags. More like missiles. Let me talk to Sofia tomorrow. Maybe she will open up and I can get her to walk away from him before it’s too late, if she’s not pissed at me for hitting her boyfriend.”

Ben needed to go home and think. He also needed to ice down his hand. It hurt like hell. He only hoped Jesse’s face hurt worse.

Go back to Chapter 47