CAUTION:  NSFW scenes towards the end. 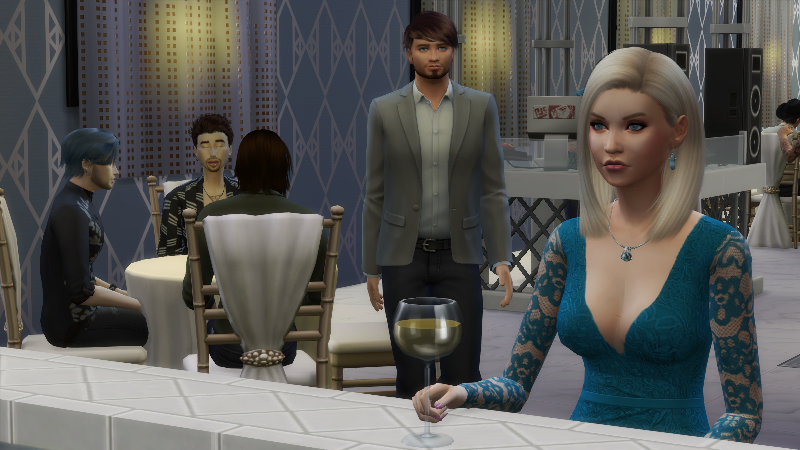 “Excuse me guys.” said Cole, “I found Dannie, I want to go say hi before they steal her.” 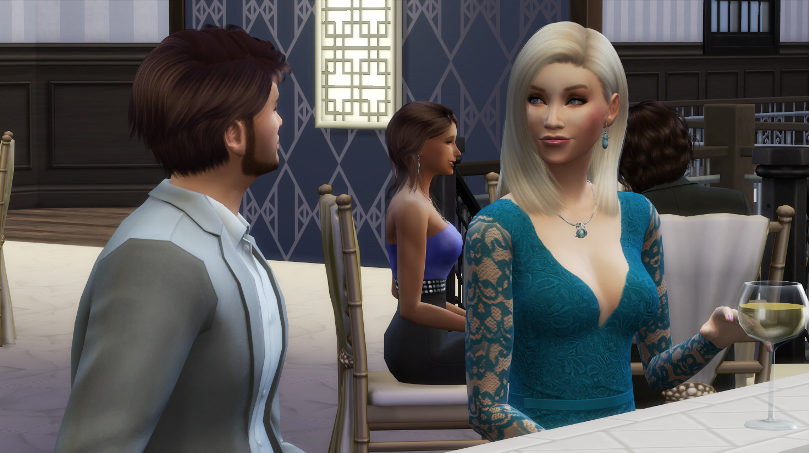 Cole slid into the empty seat next to the petite blonde woman. “Hey stranger. Twice in two months. I think we should continue the trend,” he said, a smile in his voice.

“Cole! It’s good to see you again!” she stood up and wrapped her arms around him and kissed his cheek. 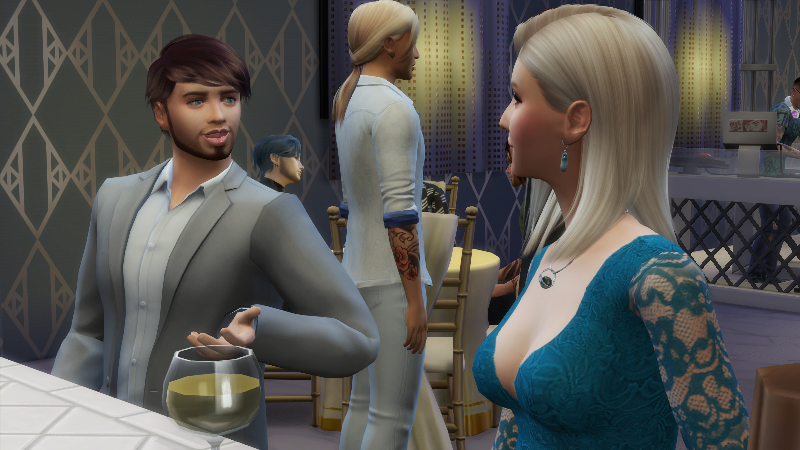 “Wow. Won’t hubby be a little jealous?’ he asked as they sat back down, “Where is he? I don’t need a black eye for messing with his wife.”

“I’m alone – again,” she said, her voice tinged with anger. 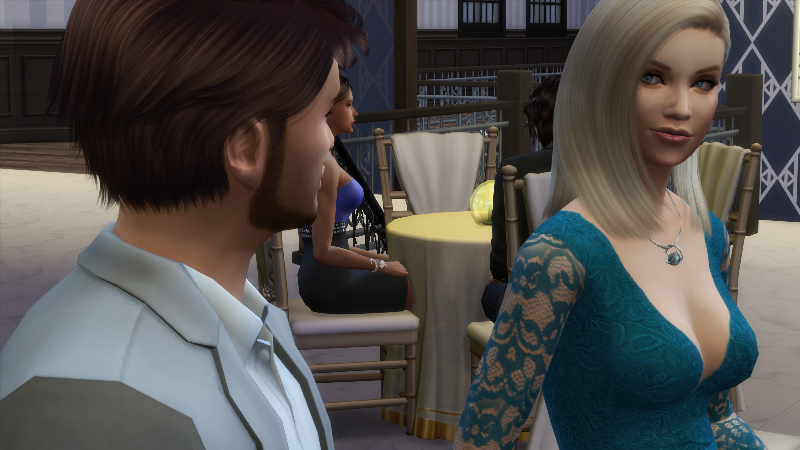 “No. He’s rehabbed. It’s pre-season games this time. We had an argument. He didn’t want me to come, but I had to. I was one of the planners. I even got a suite in the hotel for us. So I’m staying in style, alone.” 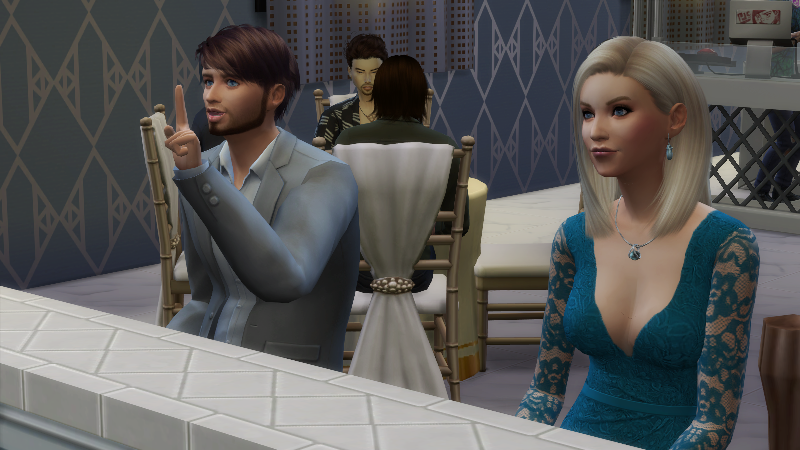 “Well, I can be your unofficial date for tonight if you like, since I am alone too. Don’t tell Noah though, he’s telling everyone he’s with me,” said Cole with a laugh and ordered another round of drinks.

Dannie laughed too. “You are kidding. He doesn’t have some hottie hanging all over him?” 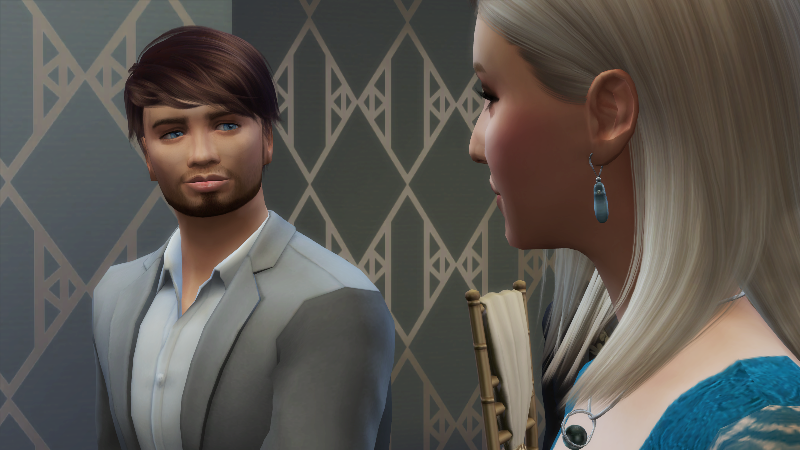 “Nope. We are both bachelors tonight. So, is it a date?”

“Sure. No need to waste a good party!” said Dannie, still laughing.

“Everything is really nice, by-the-way. You guys did a good job,” said Cole.

They were finishing up their drinks, talking about their jobs, when the three girls found them. 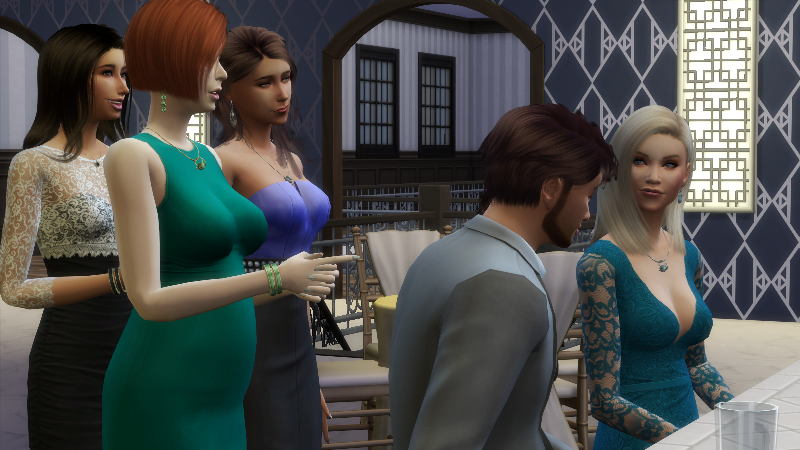 “Okay Cole,” said Nicky, “we need to borrow her for a minute. We have to get a picture of our ‘Locker Rat’ crew.”

“Sure,” he said. Dannie readily jumped up and went with the girls, talking and giggling.  They got in line for the photographer the committee had setup for anyone that wanted pictures. 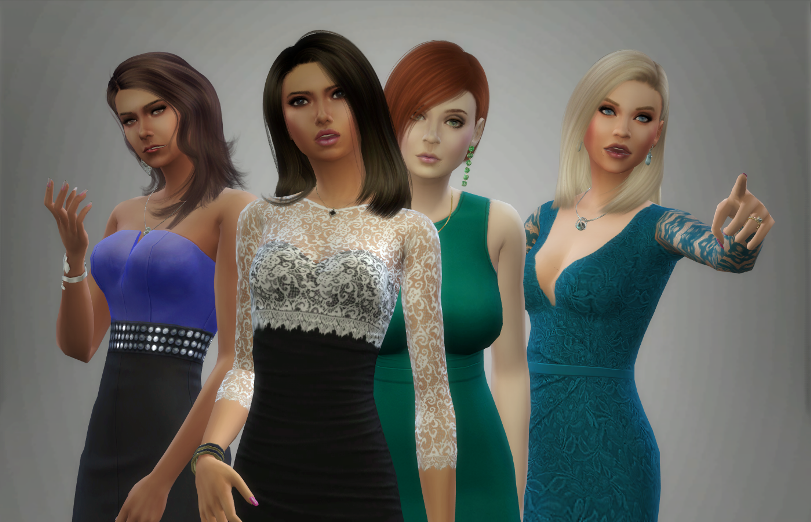 After they came back, they were all still laughing, and showed Cole the ‘Locker Rat Crew’ picture.  Each girl had one. 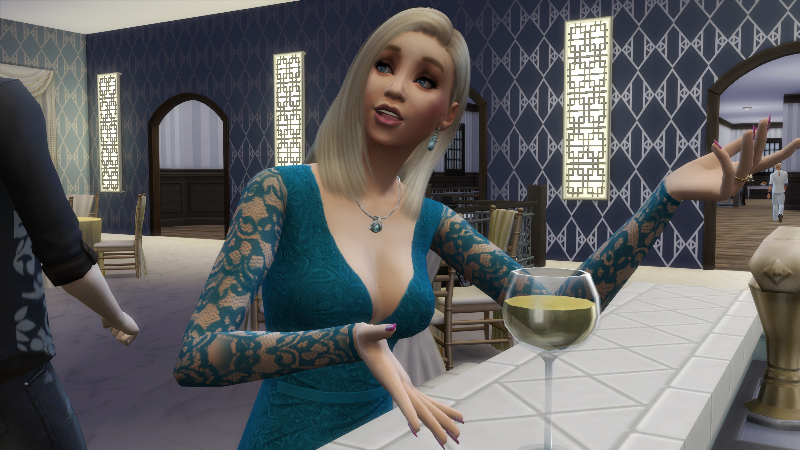 Dannie sat back down with Cole and they had another drink. They began rehashing the whole ‘Locker Rat’ incident. The two of them laughed so much, Cole had tears in his eyes. He hadn’t enjoyed himself this much in a very long time. Not even with Yasmine. Sadly, it seemed like they spent so much of the last 6 months of their relationship fighting. 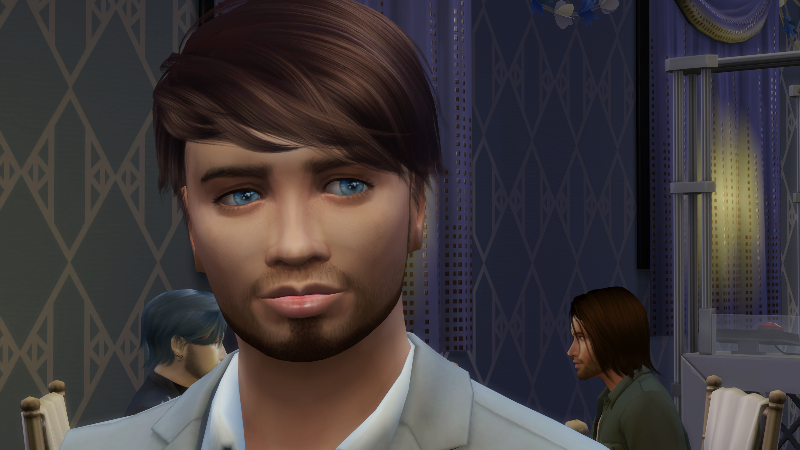 The D.J. started up again, so he asked Dannie to dance. 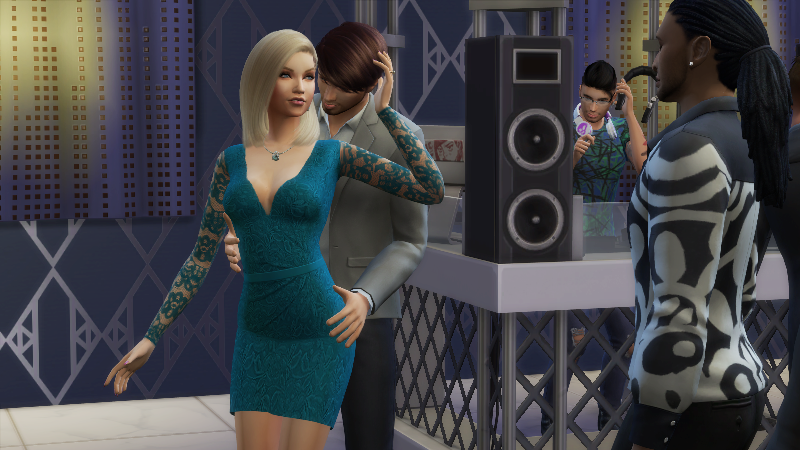 This time they actually made it to the dance floor. They laughed and did silly dirty dances to the fast songs. But after a while, it no longer felt silly to Cole, even though he pretended it was. He wondered if she was also pretending.  Regardless, he was enjoying it and could tell she was too. 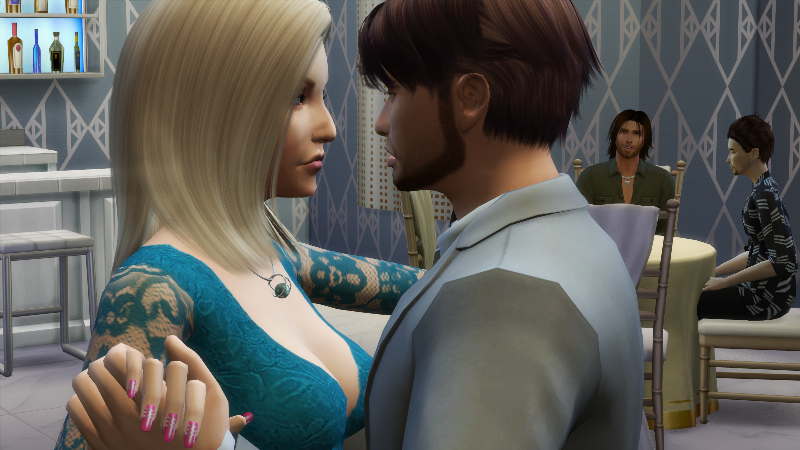 Finally, a slow dance came on, giving everyone a chance to catch their breath.  Dannie started to walk off, but Cole kept her on the dance floor.  They were both having too much fun, and he wasn’t ready for it to end. He was suddenly very glad he decided to be Noah’s date. He needed this. 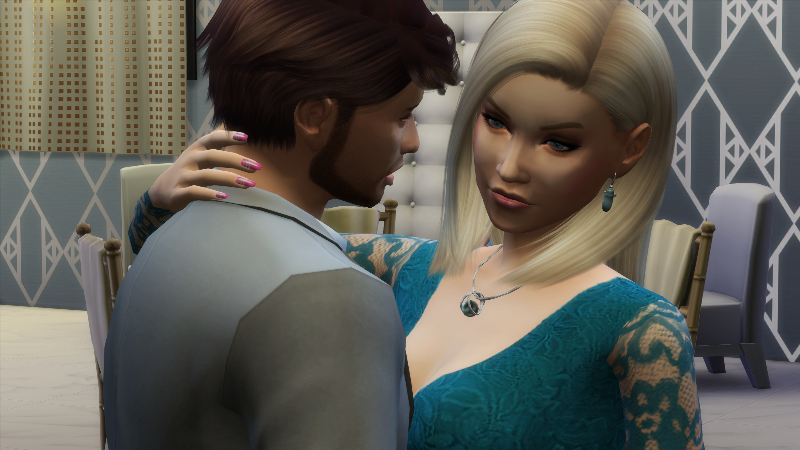 “Cole?” asked Dannie, during the slow dance, “Did you ever wonder what might have happened if we never went back with our exes in high school? Do you think we might have wound up together?”

He thought about her question for a minute. In the back of his mind he had wondered, but never went there because he was with Laney. “Hmm. Maybe once,” he said.

She frowned slightly. “Just once?” she asked, then laughed her tinkly Dannie laugh, making him feel all warm inside. 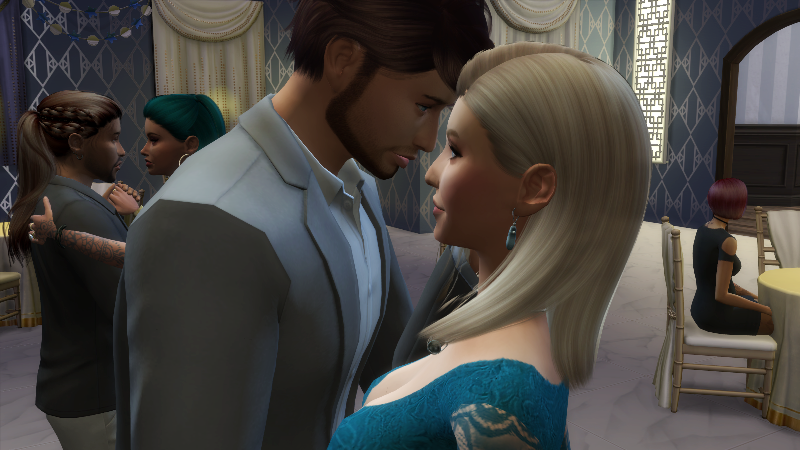 Why didn’t we ever get together? he wondered. “Well, maybe twice,” he said and looked down at her. She looked beautiful tonight. Her face was a little flushed from dancing, and maybe the alcohol. Or maybe, just being so close to him. Impulsively, he kissed her on the forehead.  “Maybe three times.” 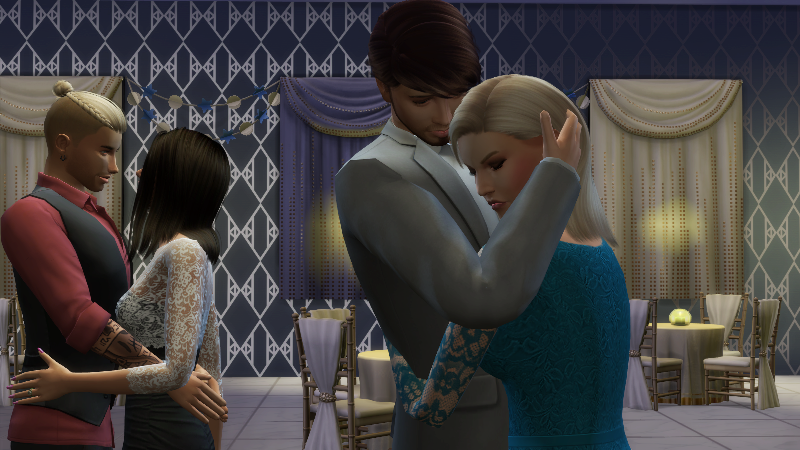 Dannie sighed softly and laid her head on Cole’s shoulder. He pulled her closer, rubbing her back gently while they slowly moved across the dance floor. He was surprised at how good and right it felt to have her in his arms.  Her soft body, so warm, pressed against his. Freely giving, and so loving. His Dannie. 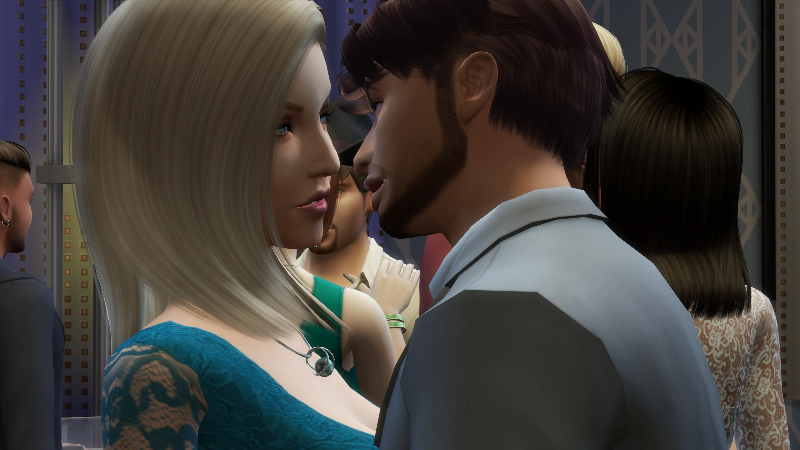 She looked up at him to say something and licked her lips. He suddenly had an urge to kiss those lips. And might have if the song hadn’t ended, breaking the spell they were both under.

Cole wanted to keep his arm around but knew he shouldn’t, so he awkwardly released her after the dance and they walked back to the bar. 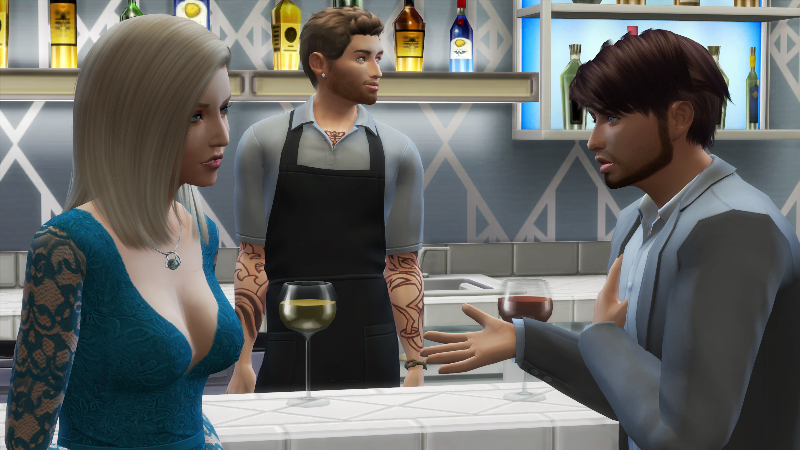 Cole freshened their drinks. “You okay? You seem like you are somewhere else,” he said softly. 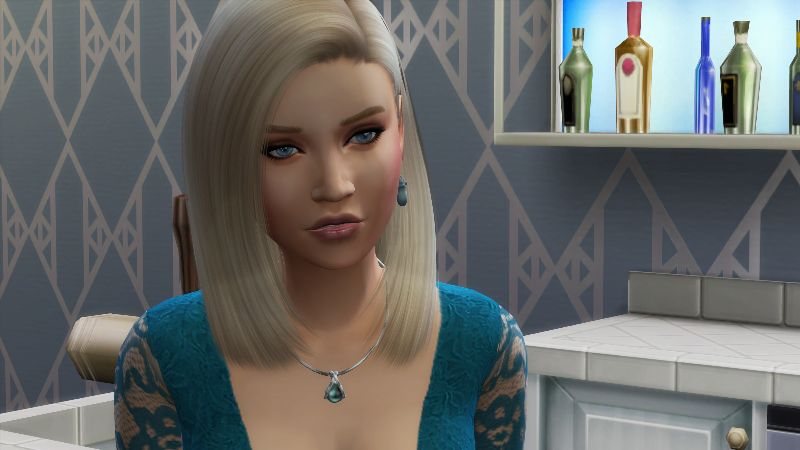 “Yes. Just a little melancholic. I miss you. Hanging out together was always so much fun. You know? You are so sweet. Yasmine and Laney, they both missed out, although Laney did land a romantic and very handsome Frenchman.”

“Hey, what does that make me? Sweet chopped liver?” he asked laughing.

“No…” she said softly, “You are a sweet man, with the most amazing blue eyes.” She stopped and looked at him before continuing, “Eyes a girl could get lost in.” 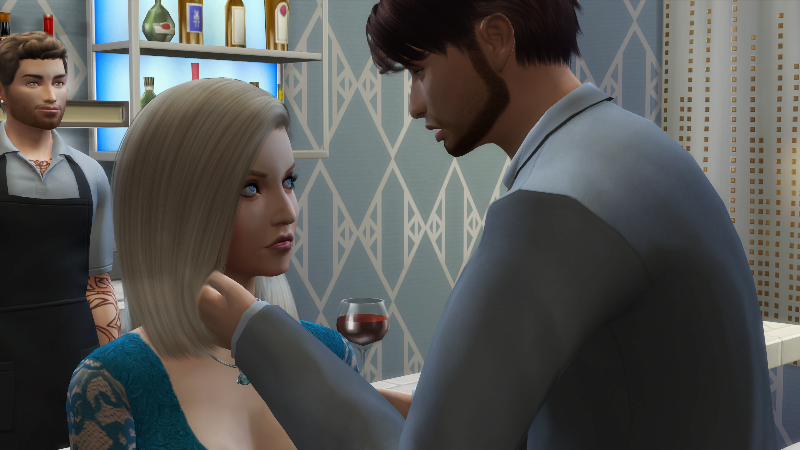 Cole swallowed hard and stood up. He pulled her face towards his.  He wanted to kiss her even more than before. “Since we are dishing out compliments…..Dannie, you are the most cheerful and sexy little romance writer I know. Got any new passages you want some “expert advice” on?” he said and laughed, trying to relieve the tension that was building between them. 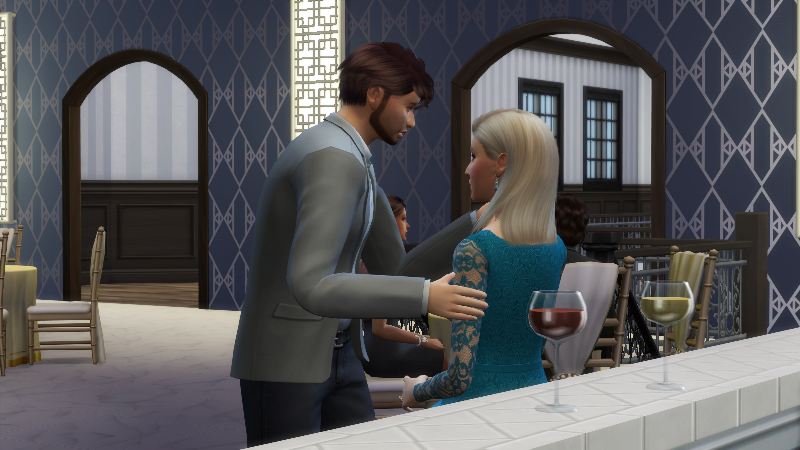 Dannie started laughing and nearly fell off her stool. Cole caught her before she hit the floor. “Oops…I think I’m a little tipsy,” she said, still giggling.

“I’ll get you some water,” offered Cole after she was back on the stool. 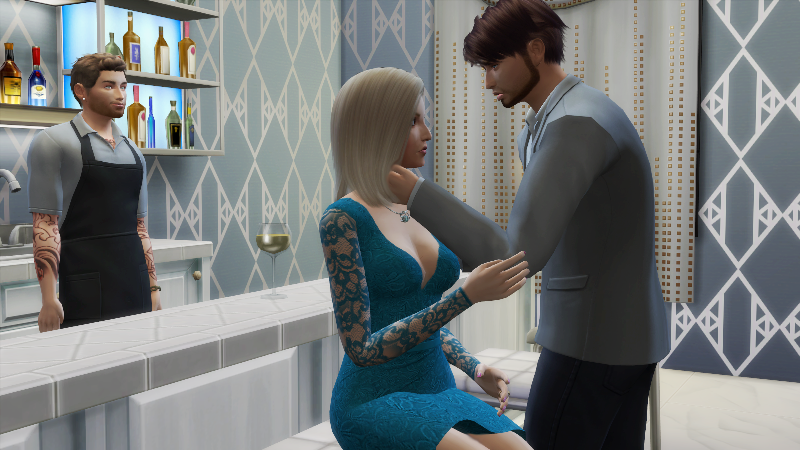 “I think I should go to my room,” she said, and stuck out her bottom lip.

“Where’s your key? I will walk you. I don’t want you going alone.”

She fished it out of her purse and handed it to him.

Dannie grabbed his arm and leaned into him. He didn’t mind at all. She smelled so good and fit perfectly by his side. She smiled up at him and he felt himself wanting her in a way he shouldn’t.

When they got to her door, he knew what was going to happen before it did. He was going to kiss her. And he didn’t care.  She looked up at him, his desire for her was reflected back at him in her clear blue eyes. She snaked out her tongue and lipped her lips. That was all the invitation he needed.

He leaned in to kiss her goodbye, and it quickly became heated and passionate.

He pulled away, feeling awkward, and unlocked the door for her.  He wasn’t surprised when he got the door opened, that she whispered for him to come inside.

As soon as the door closed they gave in to their desires and kissed each other until they didn’t know where one started and the other began.

When Dannie started unbuttoning his shirt, it pulled him out of his lust driven haze. He grabbed her arm, stopping her. “Dannie, are you sure this is what you want?” he asked softly.

“I’ve never been more sure of anything in my life. I need this. We need this,” she said and pulled her dress over her head.

When he saw her bared before him, he was helpless to stop.  She was so beautiful, and she was also so right. He wanted this as bad as she did. Needed it even.

After they came down from the afterglow of their lovemaking, Cole realized what a grave mistake they had made. He still had Dannie in his arms and didn’t want to let her go, but he knew he had to. She wasn’t his to have. God she was married even.

Finally he gathered the courage to speak. “Dannie, this was so wrong,” he said, his voice soft and filled with regret, “I’m so sorry. It shouldn’t have happened. This isn’t like us. We don’t do this. I don’t do this.”

Silent tears began to form in her blue eyes.  “Don’t be sorry,” she said, her voice just a whisper, “I’ve never done this before either. I’ve never cheated. Oh God,” she sobbed out, “He can never, ever find out. He already didn’t want me to come.”

“Shhh. Dannie. Please don’t cry,” said Cole gently, trying his best to soothe her.  It was hard to do because they were both still naked. He already felt like a jerk and needed to put some clothes on, but he needed her to be okay more, so he stayed put. “He won’t find out Dannie. But if I don’t leave, he might.”

He gently pulled his arm out from under her and began to pull on his pants.

“Cole” she said to his back, “how did we mess up so bad? Can we still be friends?  I need you as my friend.”

He feared she was right, that this might be the end of their friendship. “This was a mistake, Dannie, okay. We should just forget it ever happened.”  He turned and looked at her and his heart broke in a million pieces. She looked so lost. “Are you sure you’re going to be okay if I leave?” he asked.

Cole leaned over and kissed her on the forehead. “You know, this can never happen again. Right?”

She nodded her head once. “I know,” she said as she turned away and began to get dressed.  When she was covered, she sat on the edge of the bed and watched silently as he pulled on his shirt. “Still friends?” she asked again, after a minute.

He sat down next to her with a sigh. “Still friends,” he agreed.

“Pinky swear?” she asked and hesitantly stuck out her pinky finger.

At the sight of her little finger stuck out for him to hook, Cole couldn’t help but smile, even as he felt hot tears begin to well in his own eyes. He hooked pinkies with Dannie. “I pinky swear,” he said on a breath.

He quickly got up, grabbed his jacket and left the hotel room before he could give in to his desire to kiss her goodbye. His heart felt like it was going to burst out of his chest. The thought of leaving her was killing him and he was breathing too fast. At the same time, he was ashamed of what he had allowed to happen, and how it might affect Dannie, their friendship – pinky promise or not, and even her marriage.

Cole barely made it out the door before he lost his composure. He leaned against the wall outside her door and took slow deep breaths to get himself under control. He felt like he was in mourning. For what, he wasn’t exactly sure. All he knew was that he felt like he had lost something precious in that hotel room tonight.