Because their dad felt guilty about leaving them alone and taking Taylor on a weeklong vacation to Paris, he gave the twins his old red Jeep for Christmas. They definitely felt they got the better end of that deal. They had wheels now! Plus, a week to themselves. 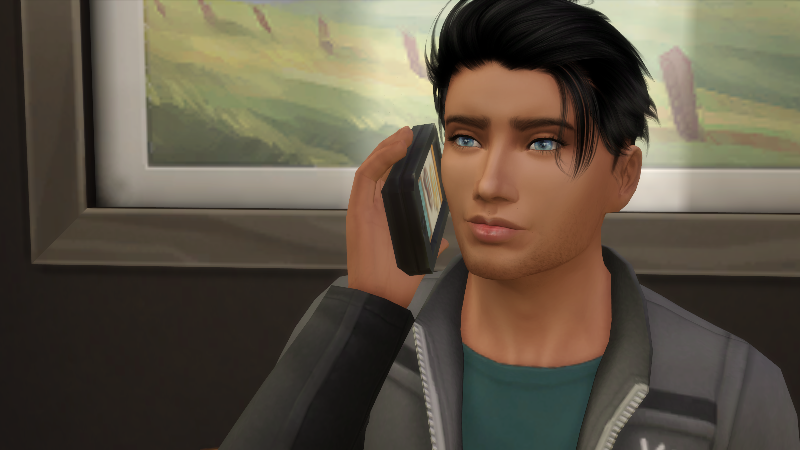 The first thing Ryan did after the rest of their family left was plan a party. Finally, he got to host a party at his house. He spent the better part of an hour calling everyone. Reagan called Link. 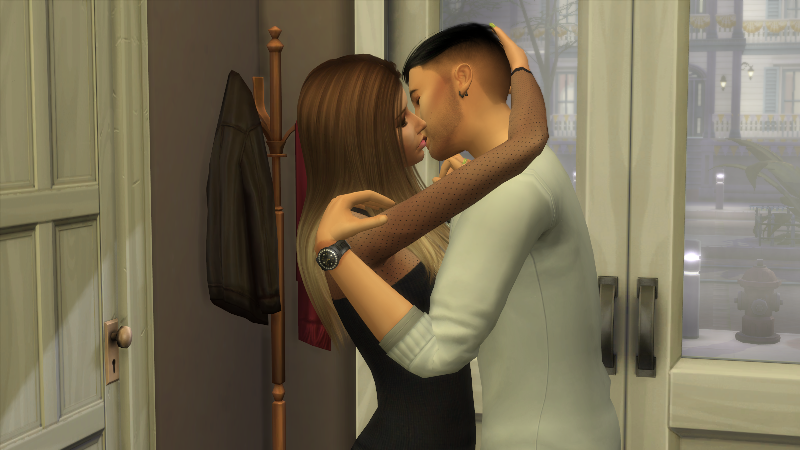 Link arrived first and Reagan ran to let him in.  “Hi,” he said with a lopsided grin.  Then he immediately pulled her in for a kiss that knocked her off her feet.  “I came early to help.  What can I do?” 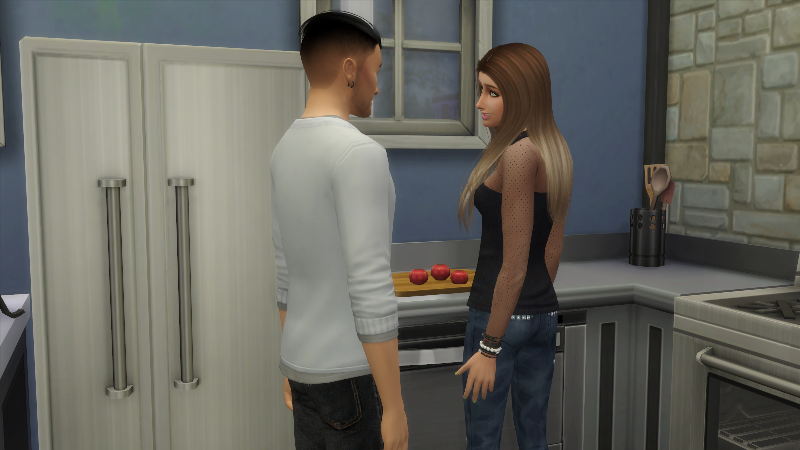 “In the kitchen,” she said. “I need help cutting up the veggies.” He followed her in, and she handed him a knife.  They began to chop up vegetables, working side by side in companionable silence. She really did like Link. He made her forget about Archer. He was always so sweet and thoughtful. 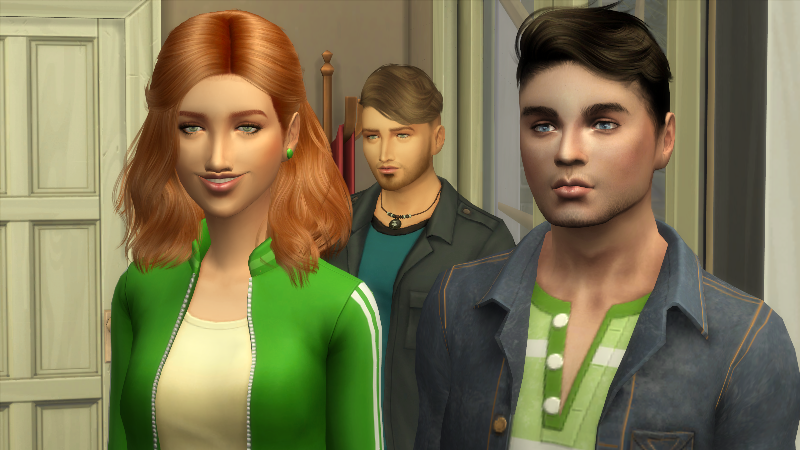 The next to arrive was Jason, who came in with his sister Olivia and her boyfriend Giorgio. Her heart went out to Jason. He hadn’t been the same since his mom and dad separated. Then to make matters worse, Kenzie moved away, and his grandfather died unexpectedly. “Excuse me Link, I want to go say hi to Jason,” said Regan and went to greet him.

Jason, as always, had his guitar with him. She knew it was probably just a way to escape. Sort of like drawing was for her. “Hi. I see you brought your guitar. You gonna sing for us?” she asked as she walked up.

“Yeah. Maybe, or just play a little,” he said without much emotion. 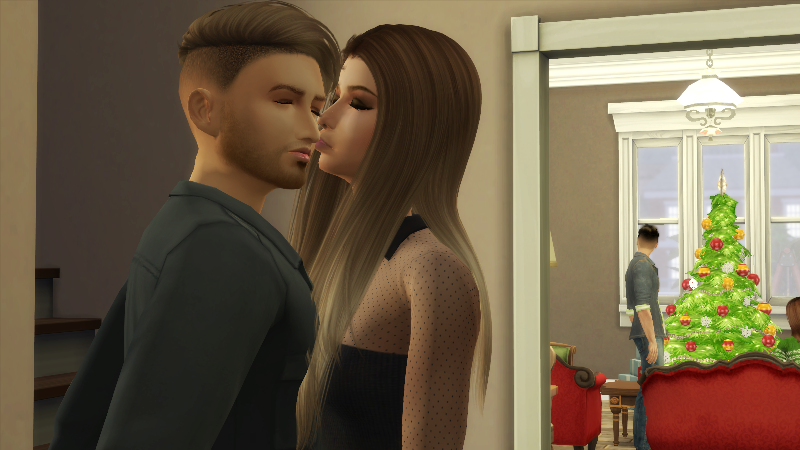 Reagan impulsively kissed him on the cheek. “I’m glad you came.”

Jason smiled at her display of affection. “Liv wouldn’t leave without me. Not much choice.”

Reagan huffed out a small laugh. “Well, good for her. Hey there’s Rosa. Maybe you two can chat. I need to go help Link.” 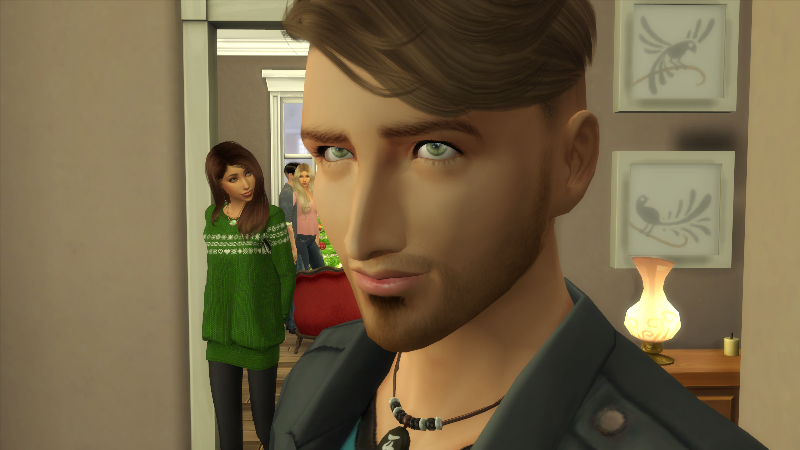 Jason looked sad for a split second before he tried to mask it. He shook his head. “You don’t need to set me up Reagan.”

“Too late, here she comes,” she said. At the same time Link walked over and put his arm possessively around her. She loved his displays of affection and she easily leaned into him. 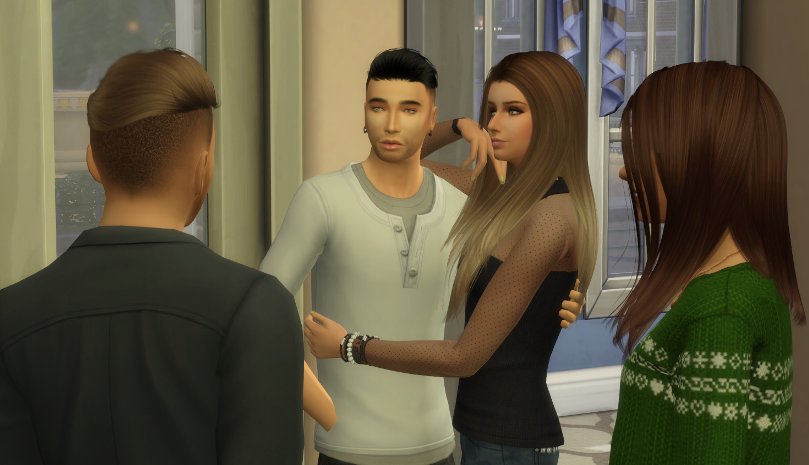 “Gonna play some of those ballads you been practicing?” asked Link and turned to Reagan, “He used to be a little bit country, now he’s a blues kinda guy.”

Rosa started talking to Jason. Reagan figured her work there was done, so she and Link left them.

“I want to talk,” said Link, “Is there somewhere we can be alone?” 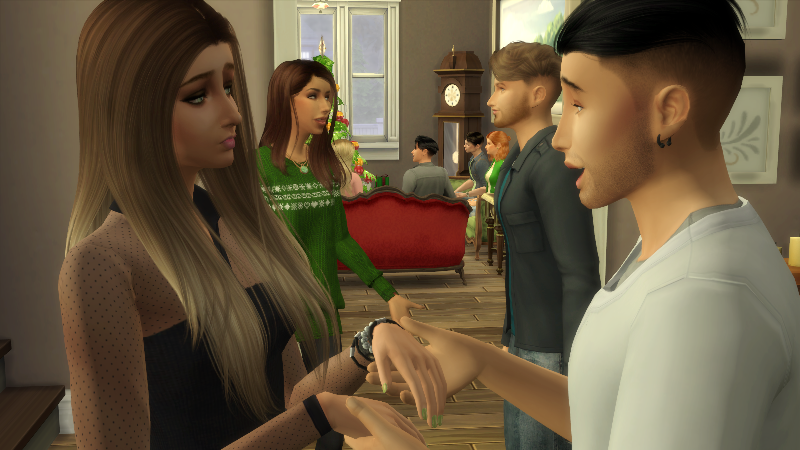 Reagan frowned worried what he wanted to talk about. She was afraid maybe he was mad because she kissed Jason on the cheek. “Maybe the playroom,” she said and led the way.

Link grabbed a couple of drinks on the way. When they walked in, he sat them down and shut the door. “Does it lock?”

She grinned and shook her head. She knew now that he had no intention of talking. 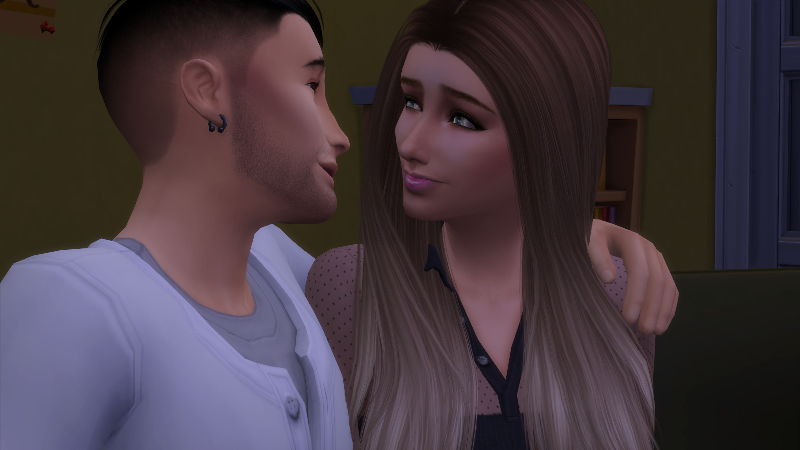 “Well damn,” he said. He turned out the lights leaving just the illuminated butterflies lighting up the room. He came and sat down next to her pulling her close. “Guess I have to behave.”

Reagan laughed at his pouty face. “Why? What did you have in mind?”

“I hoped we might be able to have a heavy make out session,” he said. “I really like you a lot Reagan. You’re hot and you don’t even know it. And fun. And your kisses – so good. You make me crazy.” 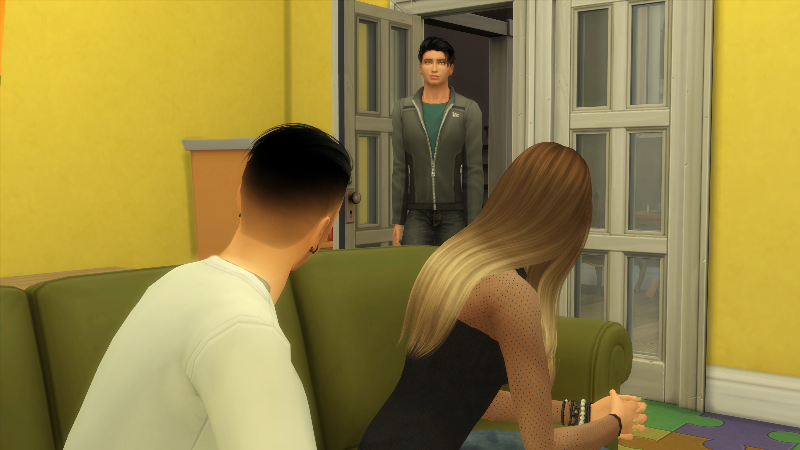 No sooner than they began to make out than the door opened, and the light was switched on. “Occupied!” yelled out Link.

“Ami and Noah?” asked Link, ‘Your aunt and uncle?” 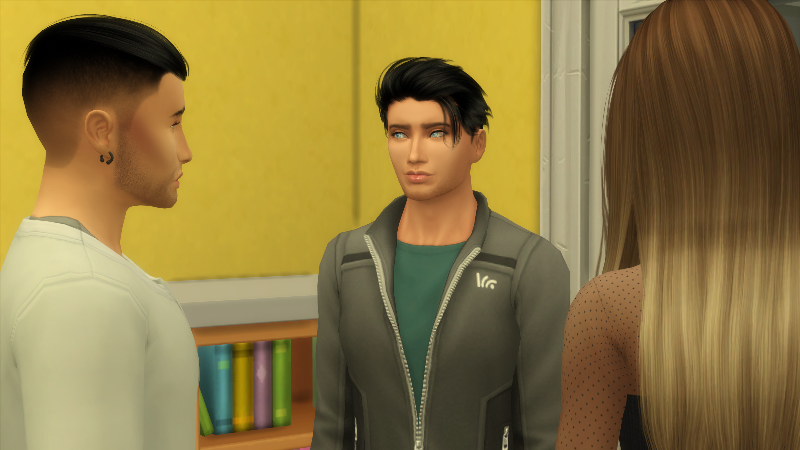 “Yeah, I guess Daddy Murdick told them to come by unannounced to check on us,” grumbled Ryan, “Thank fuck this party just started.”

The doorbell rang seconds later. “There they are. Fuck fuck,” he said and turned to go answer the door. 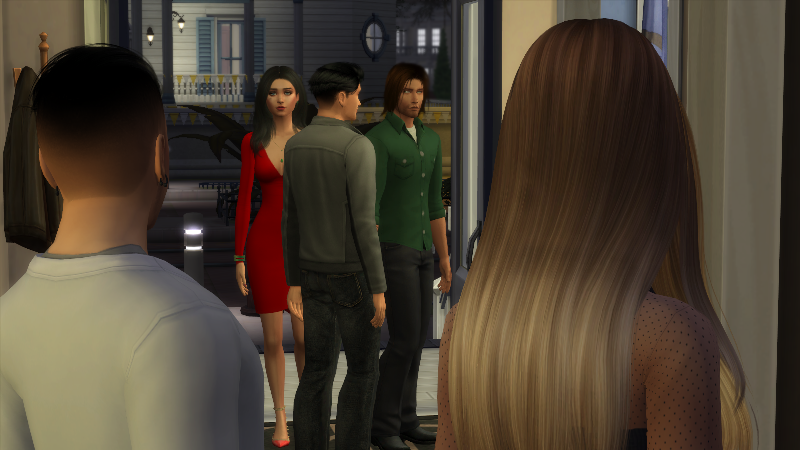 Reagan and Link made their way into the front room where everyone else was congregated paying no attention to the newcomers. Ryan was already talking to Ami and Noah. At least they didn’t look mad.

When Ami saw Reagan she lit up. “Hi Rea!” she said and walked over to where she and Link were standing. “Who’s this?” She motioned to Link.

“This is Link Masson. My boyfriend,” said Reagan, “Link this is my Aunt, Ami Redcliffe, and that is her husband, Noah talking to Ryan.” 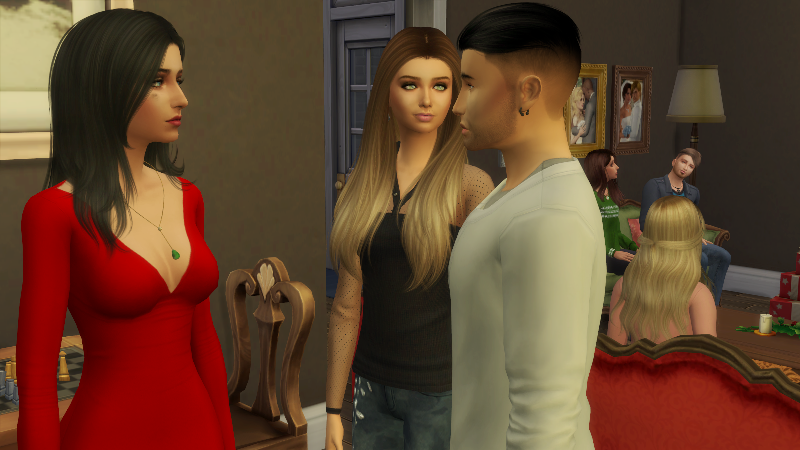 “You too Mrs. Redcliffe,” he said in return.

“Ami – please. Mrs Redcliffe makes me feel old.” Then she turned to Reagan, “So Reagan, having a party?” 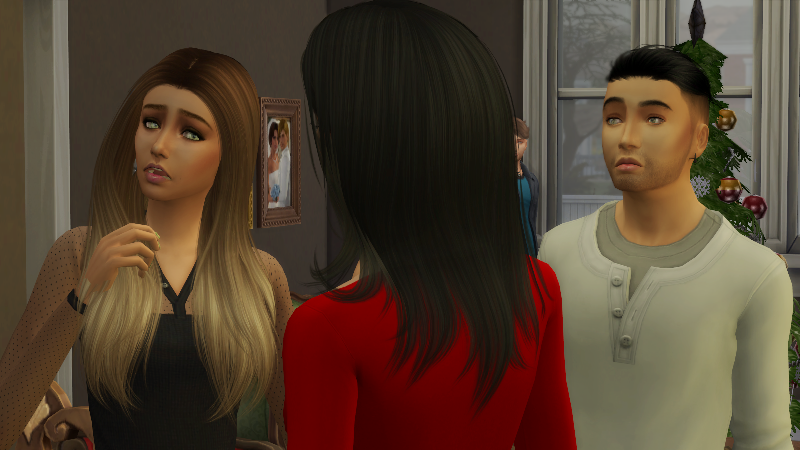 “Yes, but we aren’t getting into trouble,” replied Reagan defensively.

“I know.  But you know, we are gonna have to stay, just in case . . . sorry Rea.  Cole would never forgive me.  We were coming home from a Christmas Party and saw the cars. “ 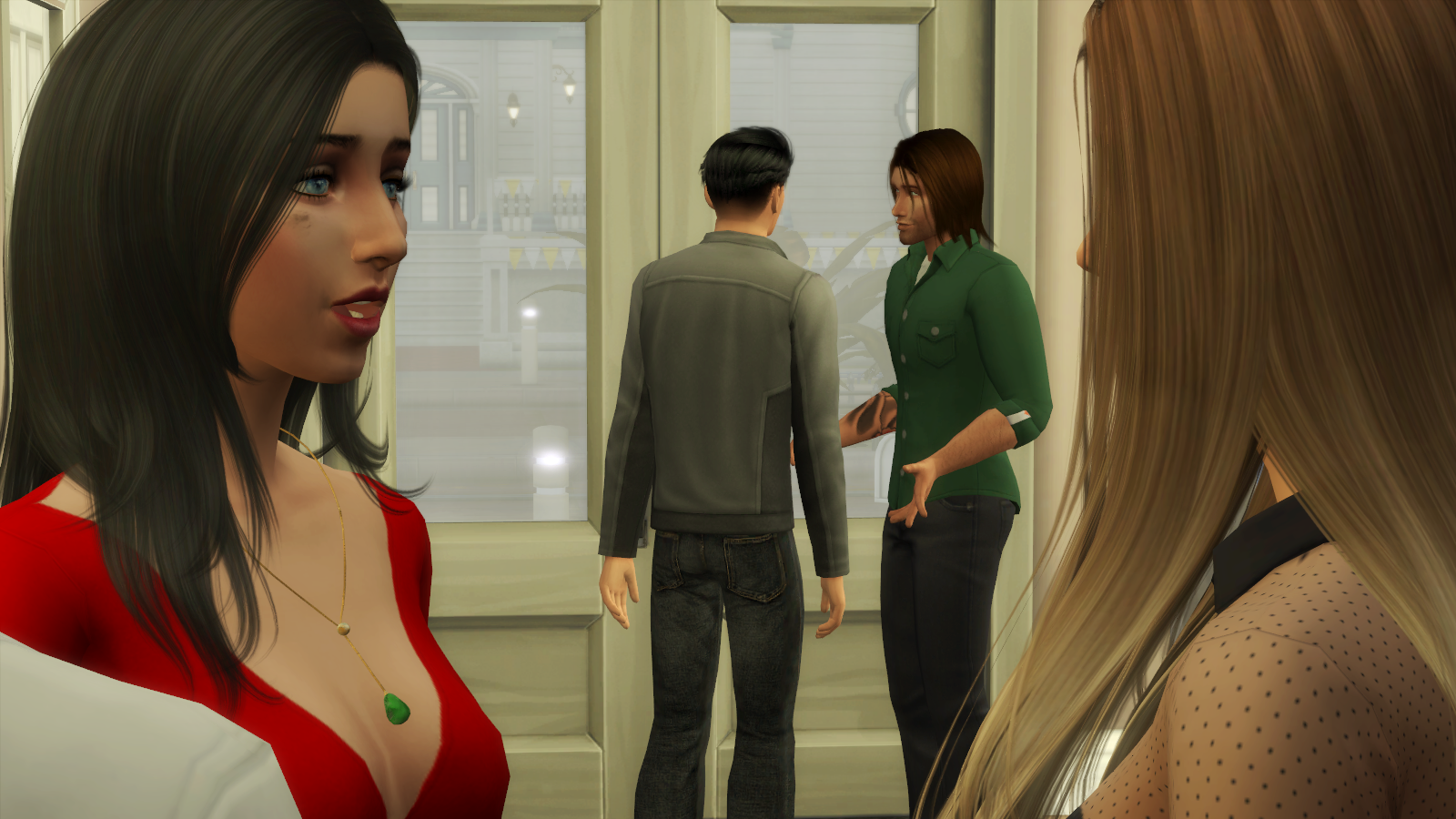 “Noah and I will hang out in the study. You guys keep outta trouble. I’m not going to take the beer, but if anyone doesn’t have a designated driver, Noah and I will take them home. Party ends at midnight sweetie. Have fun.” Ami turned to Noah, “Hey Noah, come on, we are going to the study to hang.”

Ryan walked over to Reagan and Link. “What did she say?” he asked.

“She was cool,” said Link answering the question for Reagan. “She isn’t taking the beer, but she said party ends at midnight.” 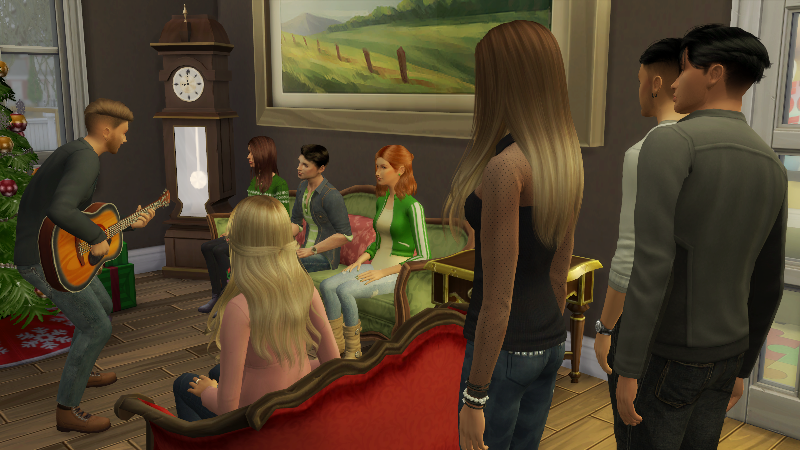 “Okay,” said Ryan with a sigh, “Well, let’s listen to Jason for awhile then we can watch a movie or play video games.” 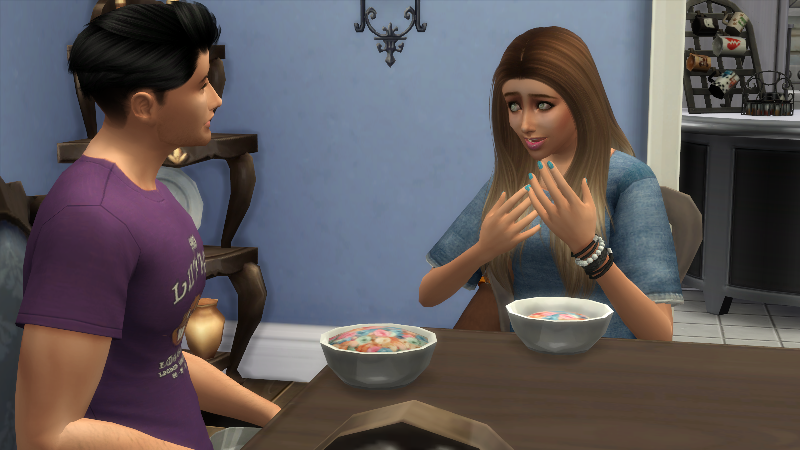 The next morning, Reagan and Ryan were having breakfast. Since neither Taylor or Dannie was there to prepare it, they had cold cereal. “Do you think we can go to San Myshuno today?” asked Reagan.

“I need to call and make sure she has agreed to see us and find out what time visiting hours are.”

“She hasn’t seen us since we were eight, so I put together a photo album of us through the years. I hope she’ll like it.  Why don’t I clean up the dishes. You go call.” 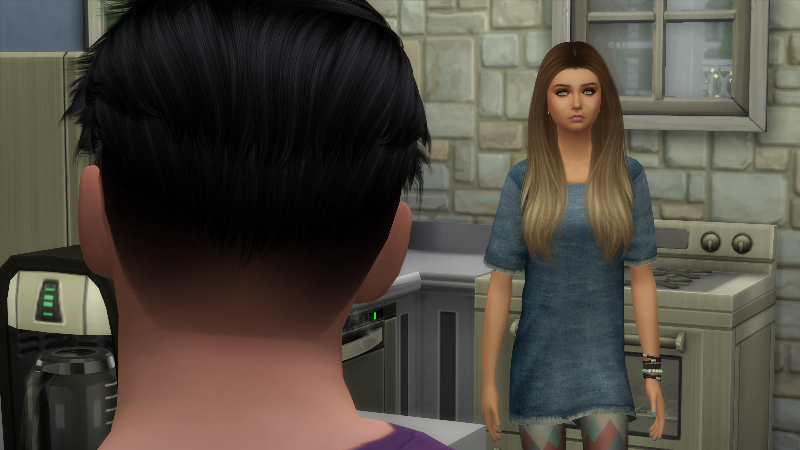 A few minutes later Ryan walked back in. He looked pale and it worried Reagan. “What’s wrong?”

“Mom agreed to see us. We can go today. It’ll take about an hour and a half to get there. We need to leave in about an hour.” 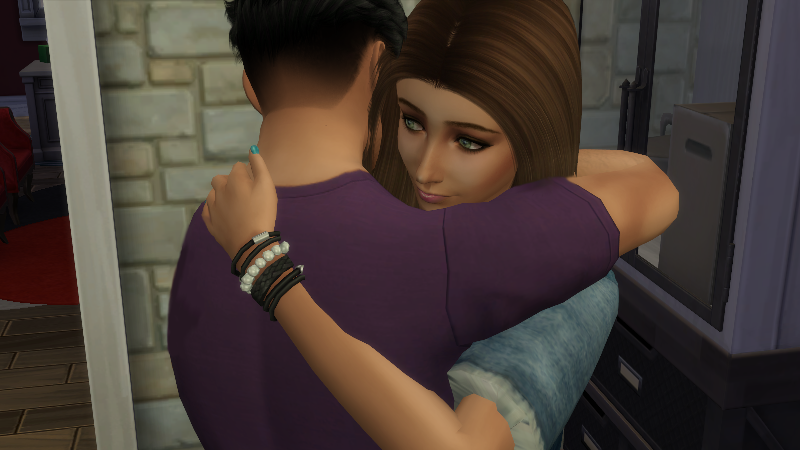 Reagan threw her arms around her brother and cried. “I can’t believe it’s going to happen!”

“Rea, do you think we should we take grandma or grandpa with us?”

“No,” she said quickly, “I don’t think Mom will want to see grandpa. Or he her.” 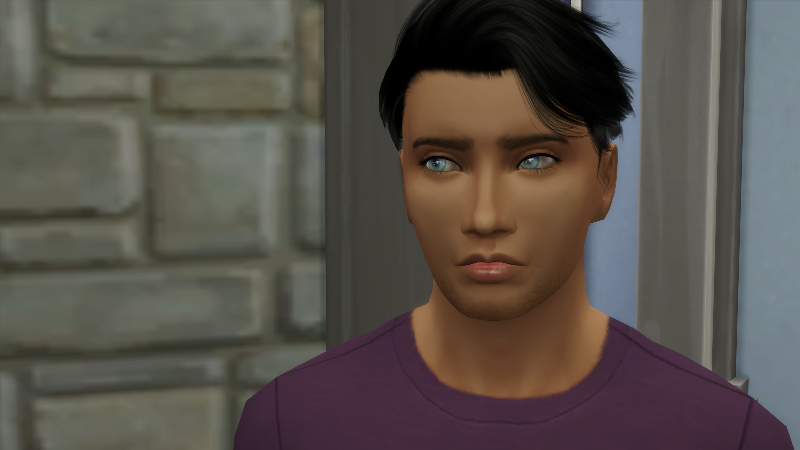 “It’s just that I’m nervous as fuck. What if it doesn’t go well Rea? We may need someone and I don’t want to ask Ami. It seems wrong.” 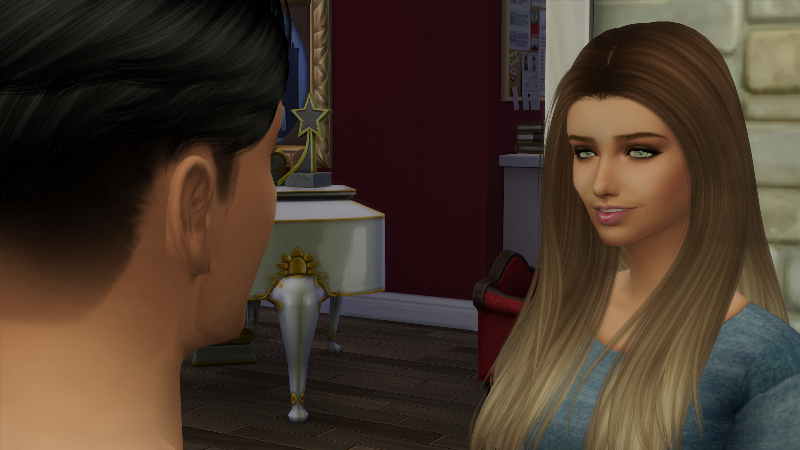 Reagan thought about it for a second. It would be good to have someone there, but there really was no one.  She gave Ryan a confident smile. “No,” she decided, “They will try to talk us out of going. I need to do this. Let’s get ready.” 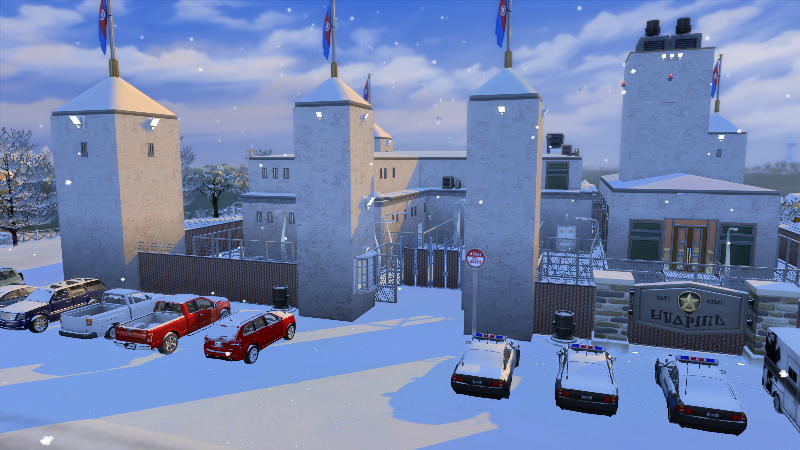 Ryan pulled their red Jeep up in front of the San Myshuno Penitentiary Women’s Unit. It had been snowing and everything was eerily quiet. Reagan knew it housed some really bad criminals. Just the thought that their mother was living behind those walls, and had been for the past 8 years, made her physically sick.

They both sat in the car not saying a word for a minute, just taking in their surroundings. Finally, Reagan looked over at her brother, and he looked just as bad as she felt. That made her sad. She hated seeing him upset and decided it was time for her to be strong for him. He always tried to take care of her, even if he was sometimes Murdicky about it. That thought made her smile inside and it helped a little. She loved her brother dearly. 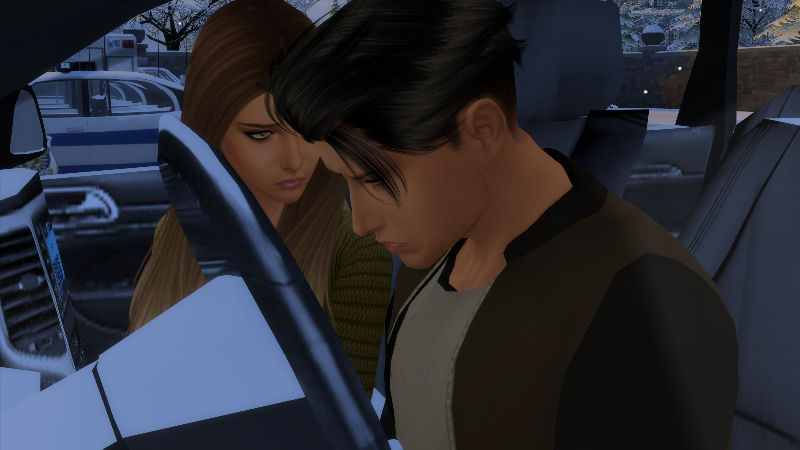 Reagan put her hand on Ryan’s to get his attention. “Come on Bubba Murdick,” she teased, with more confidence than she felt, “It’s time to go see Mommy Dearest.” Ryan chuckled softly and that too helped.

“Okay,” he said and then resumed his scowl. “You don’t think she really is evil, do you?”

Reagan thought a minute before replying. “No, because we aren’t evil. If she was, wouldn’t we be too?” reasoned Reagan. 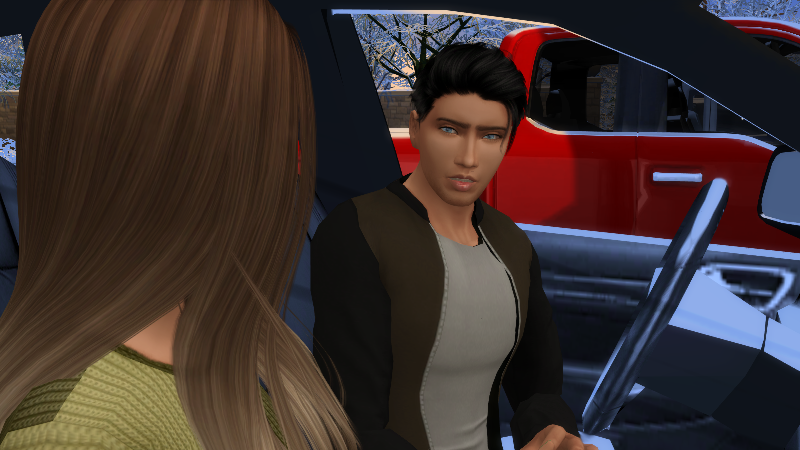 “Okay – I guess,” said Ryan, “Get your scrap book or whatever and let’s do this.” 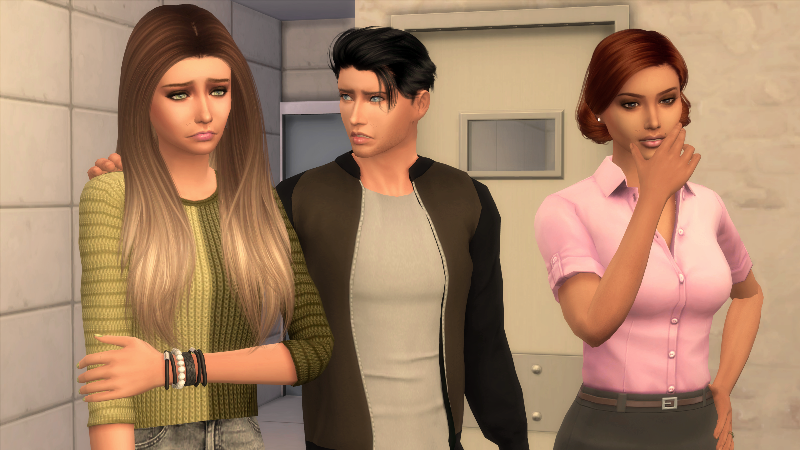 Once inside the prison, a woman led them down into the visitor’s room. On the way she had given them strict instructions that they could only hug briefly before and after the meeting. Reagan was beginning to feel sick again, so Ryan put his arm around her to offer support. 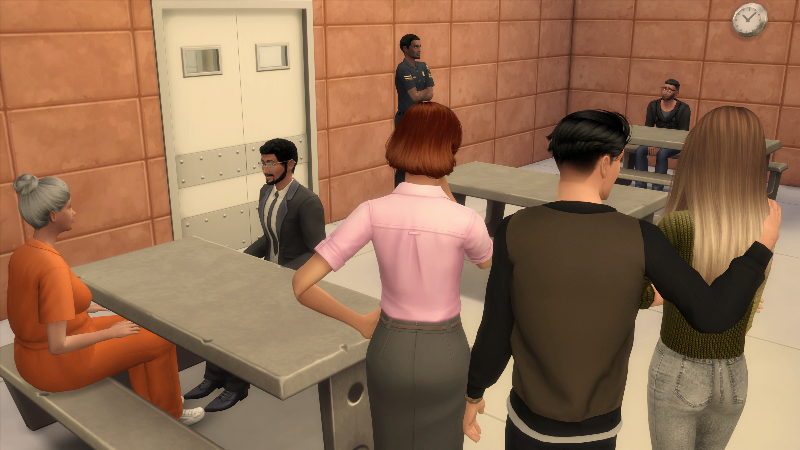 The woman pointed to a concrete table. “Please, have a seat at that table and I will let the guards know that you are here for Mrs. Murdock. She should be down momentarily. And remember, only a brief hug. The guard over there will be watching to ensure everything is okay.”

As soon as she left, Reagan and Ryan nervously sat down on one side of the bench to wait. Reagan gently laid the book out in front of her like some sort of sacred peace offering. She knew Ryan could probably hear her heart beating. She was terrified and her hands were shaking. Honestly, Ryan didn’t look much better. 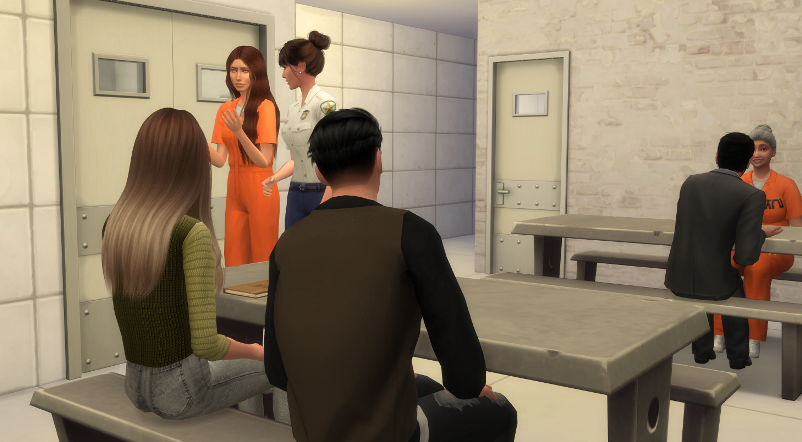 Each time the door would open, and another prisoner was led to a table, Reagan held her breath.  At least fifteen minutes had passed since the woman left to get their mother and they were beginning to wonder if maybe she changed her mind about seeing them. 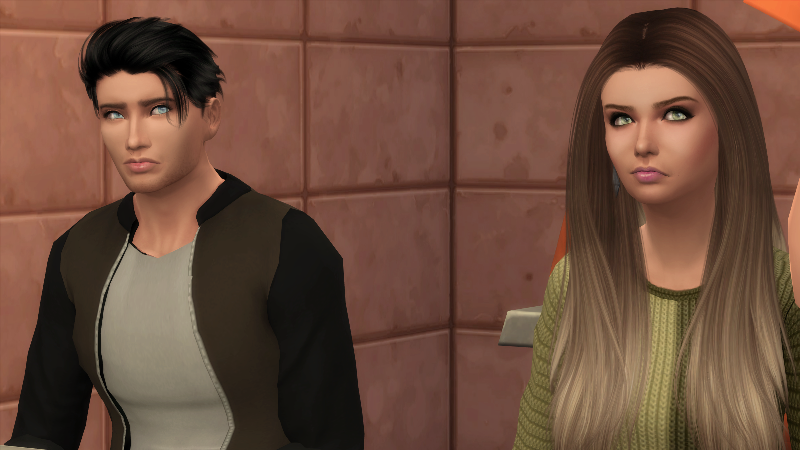 Finally, the door opened again, and a dark-haired woman walked out accompanied by a female guard. The guard pointed to them, and Reagan felt her stomach lurch.  She grabbed her brother’s hand and squeezed it hard. 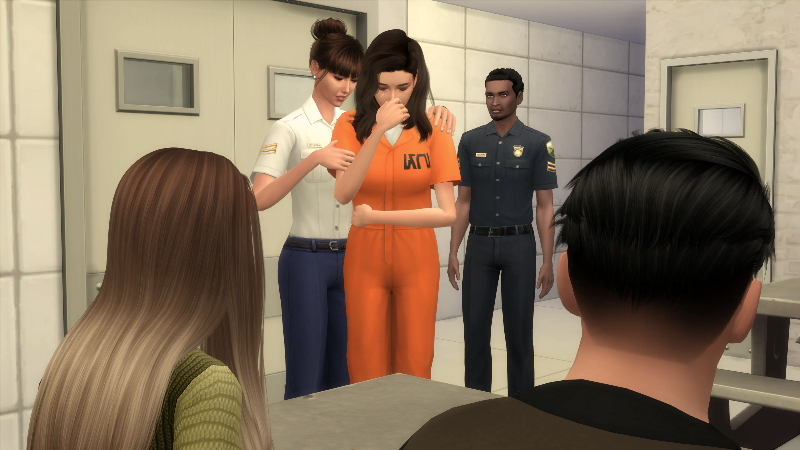 When the prisoner eventually looked up and met their eyes, she gasped loudly. “Oh god!” she mumbled, and her face crumpled as she began to sob, her whole body shaking. The female guard had to support the woman’s weight for a minute while she tried to regain her composure.