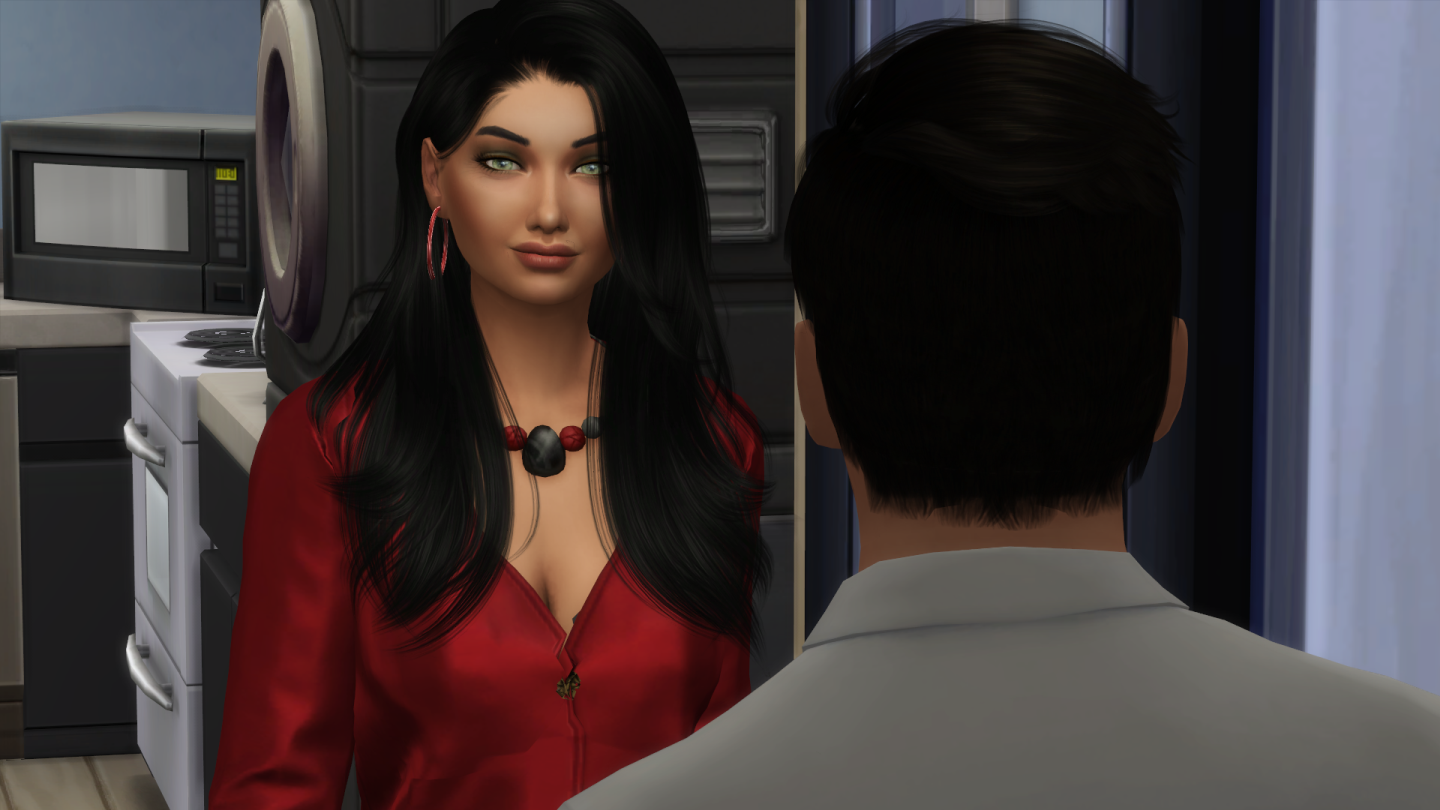 Ryan left the gym as soon as his 10:00 client was gone. When he got to Reagan’s door, he didn’t even ring the bell before it door opened and his mother was standing there. “Well, well, look what the cat dragged in,” she said with a smirk, “I don’t suppose you’re here to see me. Guess good news travels fast. She’s downstairs wallowing.” 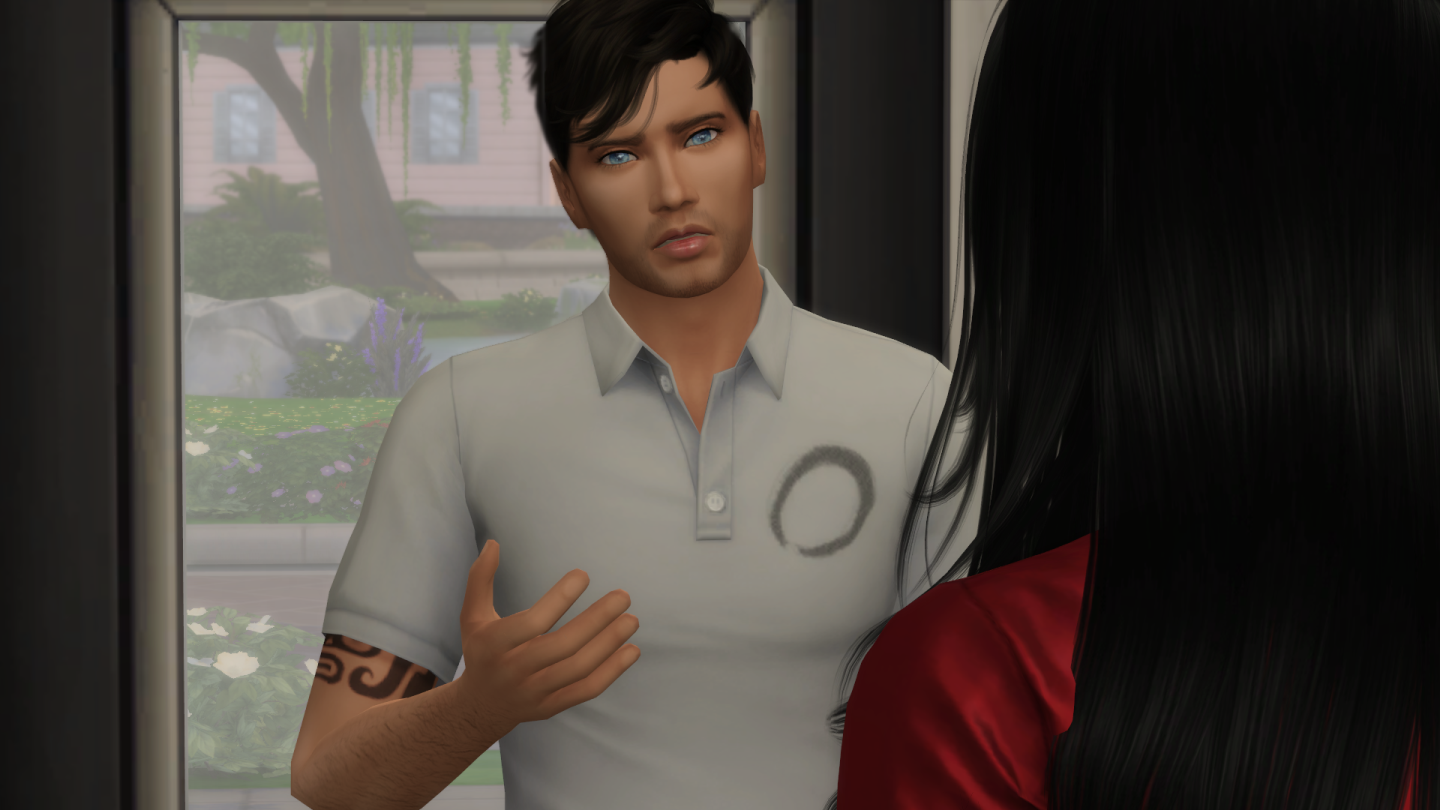 “Nice to see you too – Mother. You haven’t bothered to call or invite me over either,” said Ryan. It was clear she was happy about the turn of events. She disgusted him.

“Yes, well I know when I’m not … appreciated. I’ll be back later. I tried to cheer her up, but she wanted to sleep. Maybe you’ll have more luck.”

Appreciated? “Wait a minute. What is that supposed to mean?” 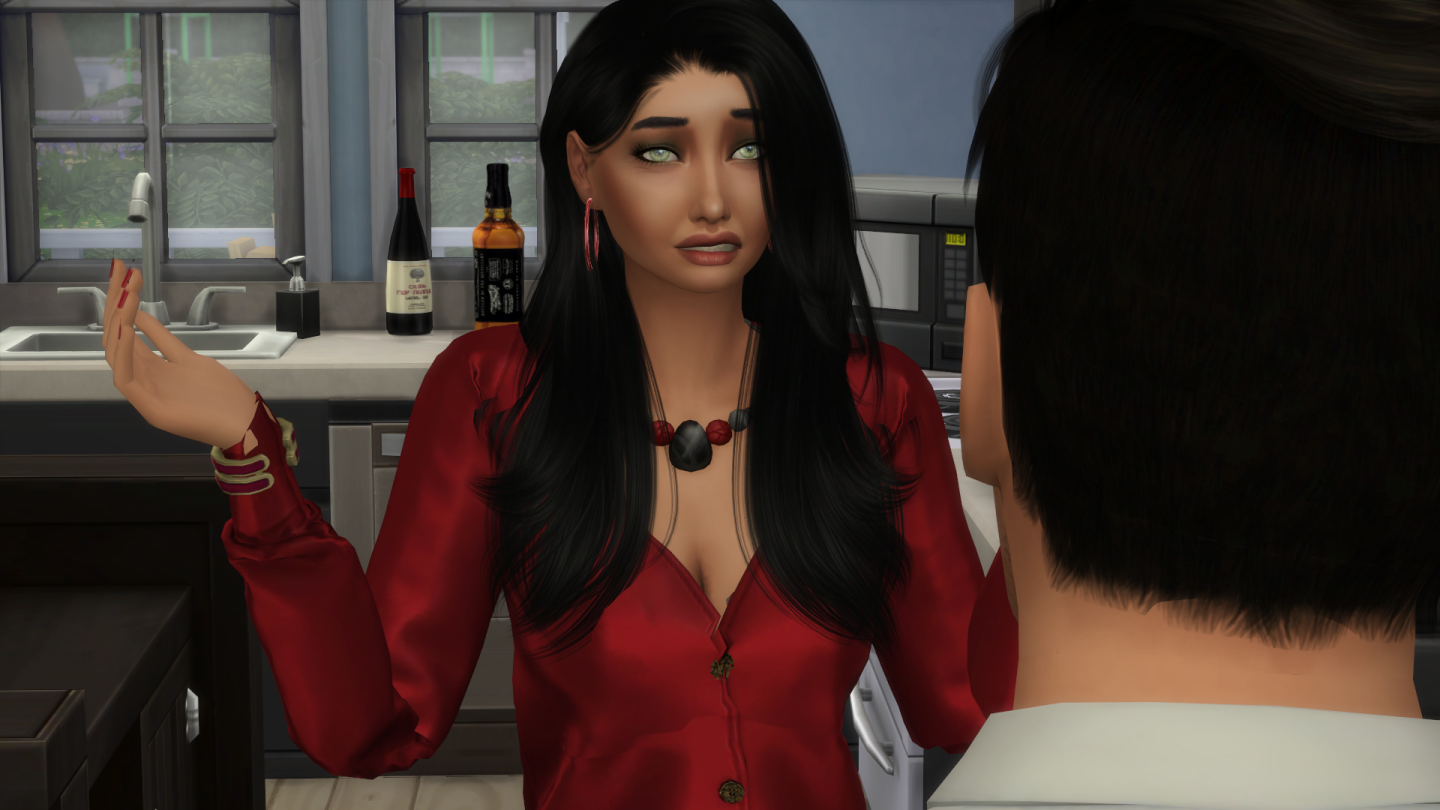 “Oh Ryan, don’t play games. I know you don’t like me. Now, I’m going to be late. Go see if you can talk some sense into your sister so she stops pining away for that cheater. And, if you’re still here when I get back, then maybe we can all sing ‘Kumbaya’ together.” She moved past him and headed out the door. 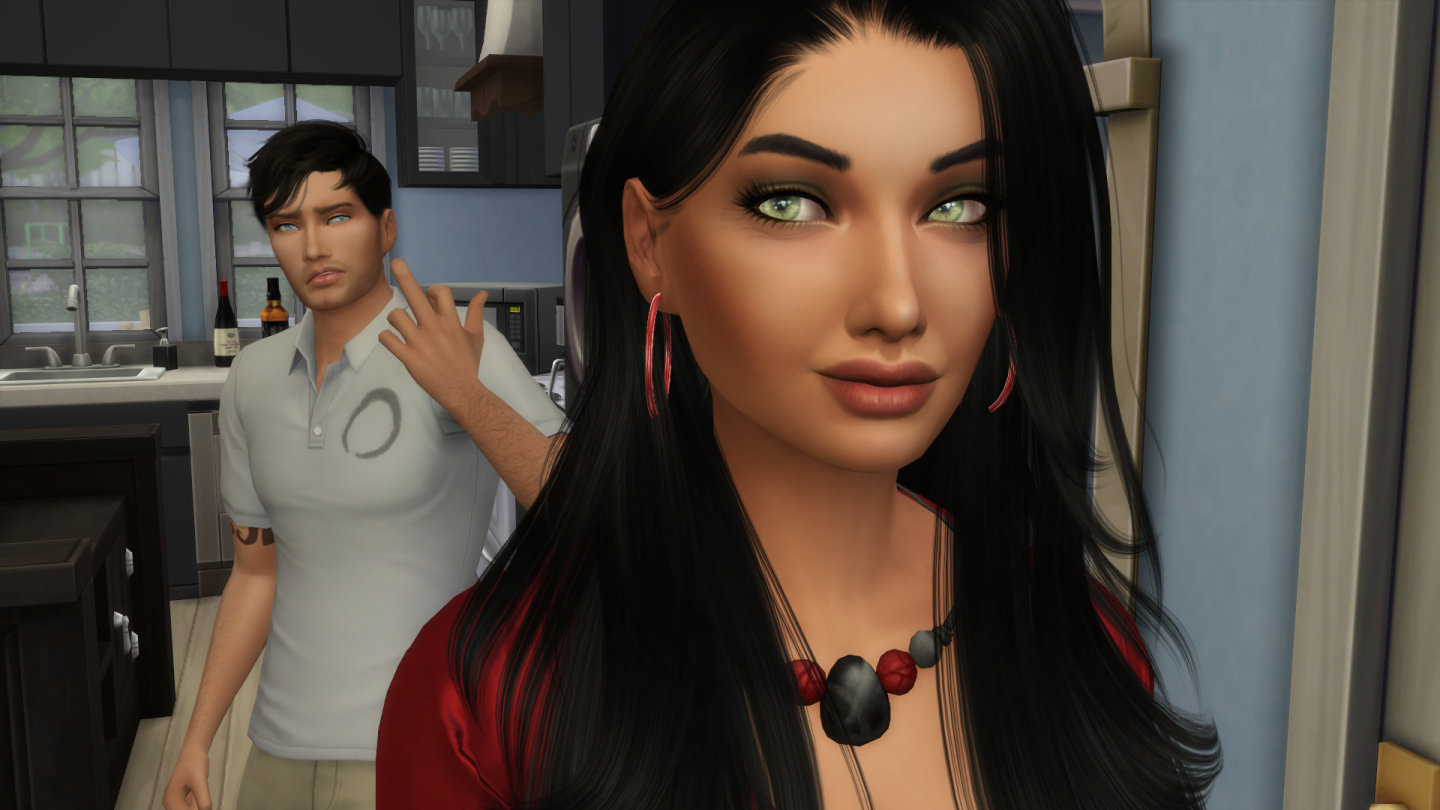 Ryan flipped her off when she turned her back to leave, then headed downstairs to find Reagan. 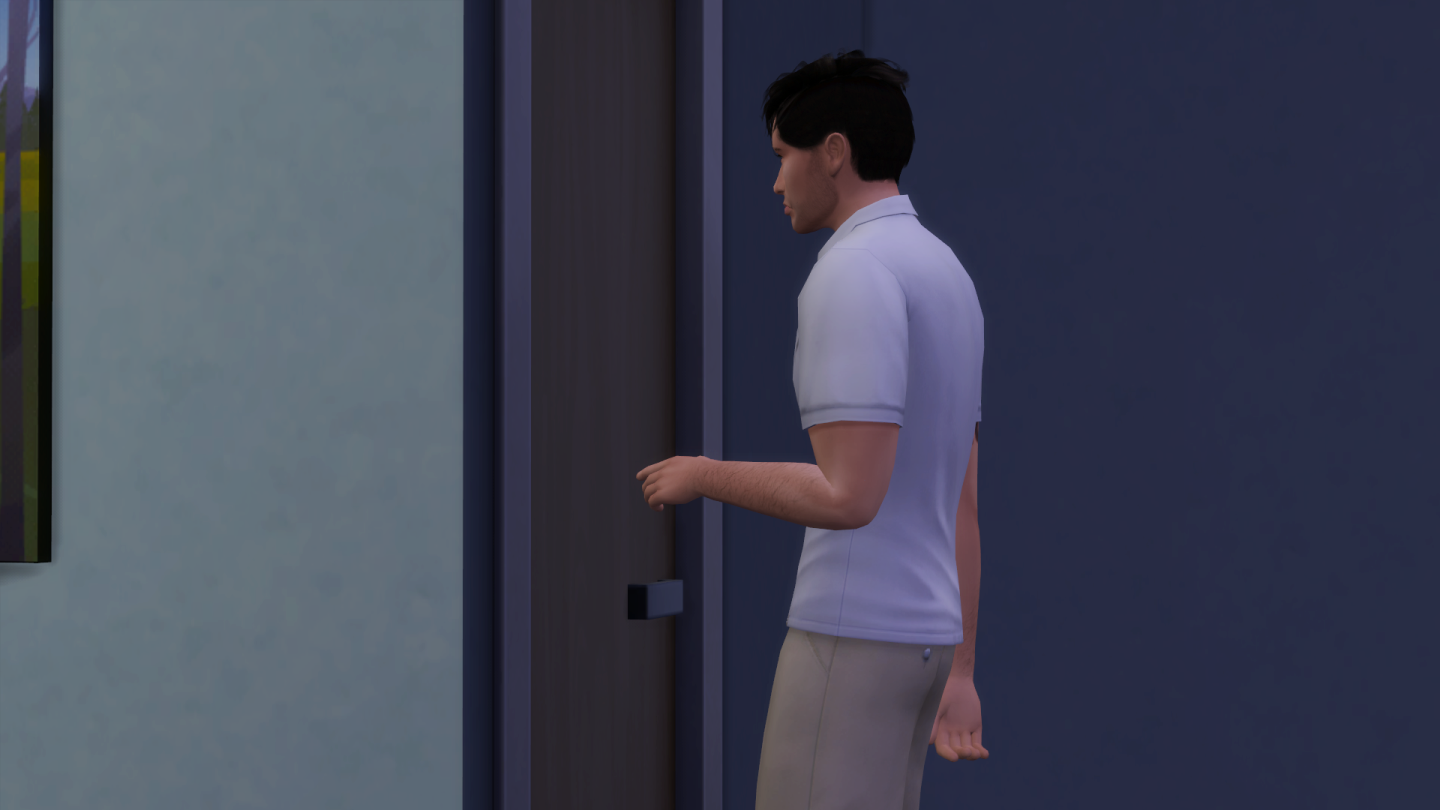 Well, Evan did have balls, he thought, at least he told Reagan. But the more he thought about it, the more nothing about it made any sense.  He knocked on Reagan’s door.

“Go away Mother, I don’t want to talk,” came Reagan’s husky voice from the other side of the door.

Shit, she sounds awful, thought Ryan. “Rea, it’s me. Ryan,” he said and cracked the door. 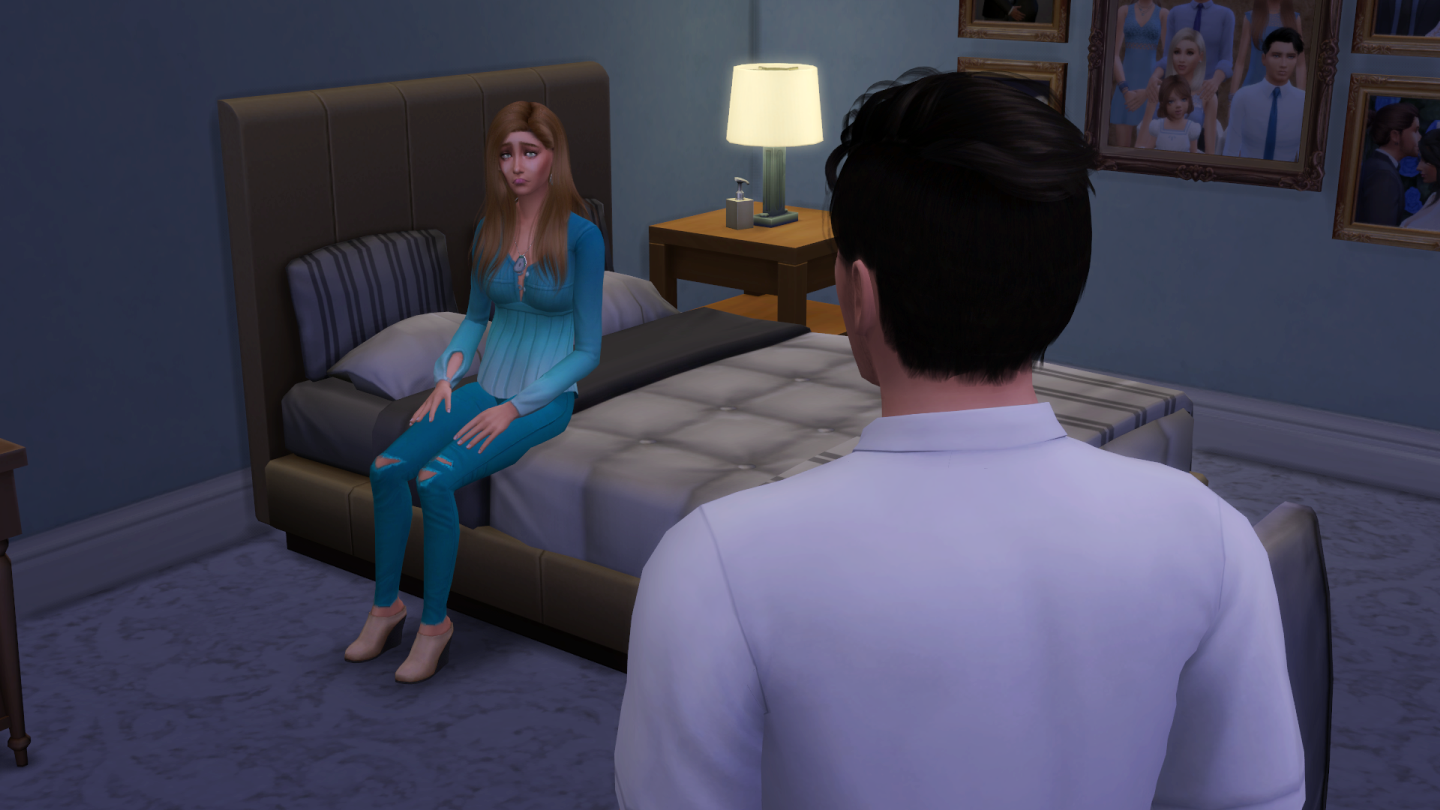 Reagan was sitting on her bed when he walked in.  “Oh Ryan!” she said and began to sob.

He walked over and sat down on the bed and scooped her into his arms and held her, rubbing her back and rocking her like a child until she regained control. 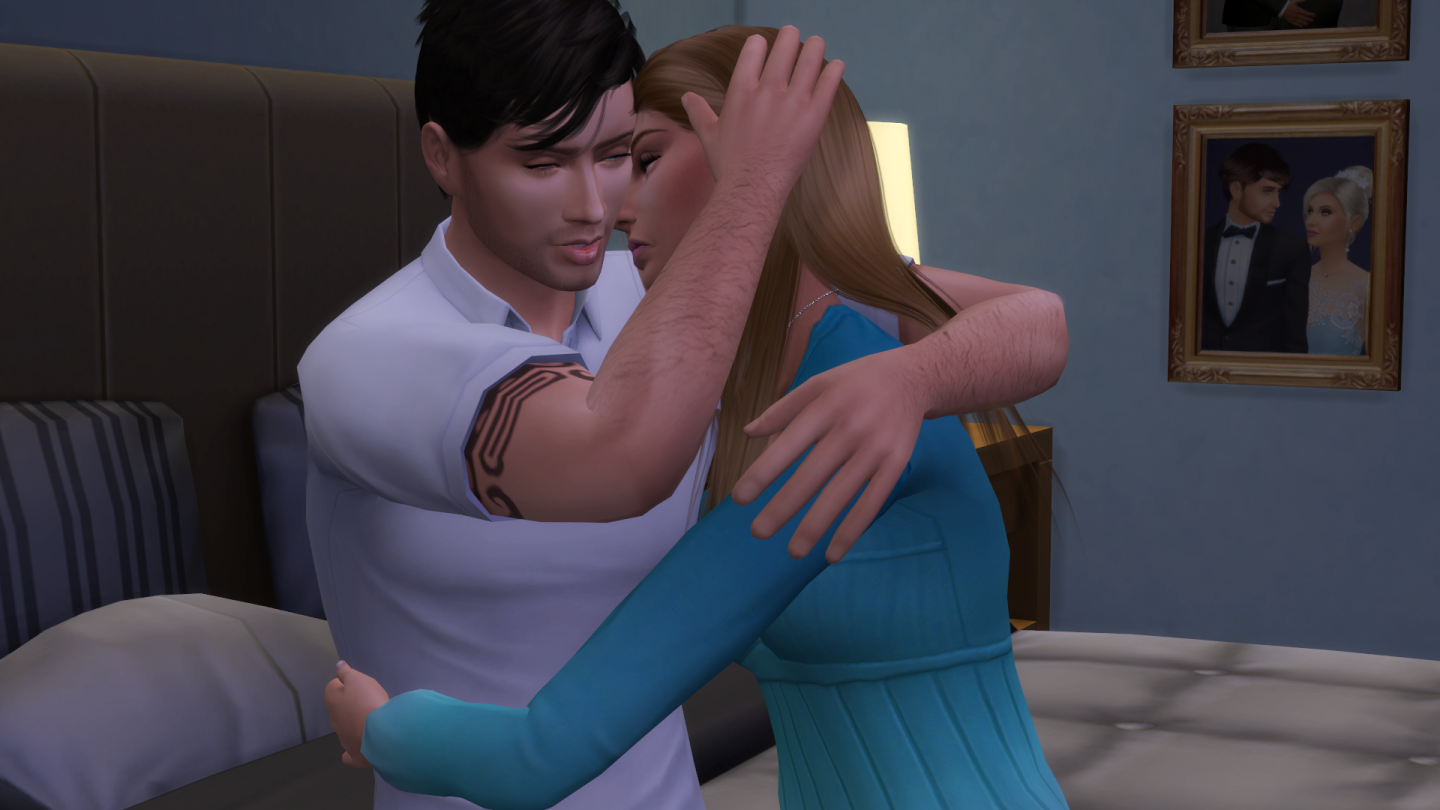 “Ryan … he told me that he loved me,” she finally managed, “and then said he was married. It’s true isn’t it?”

“It is. Are you going to continue seeing him once the divorce is final?” After talking to Bel, he figured she had a lot to do with why it wasn’t already final. 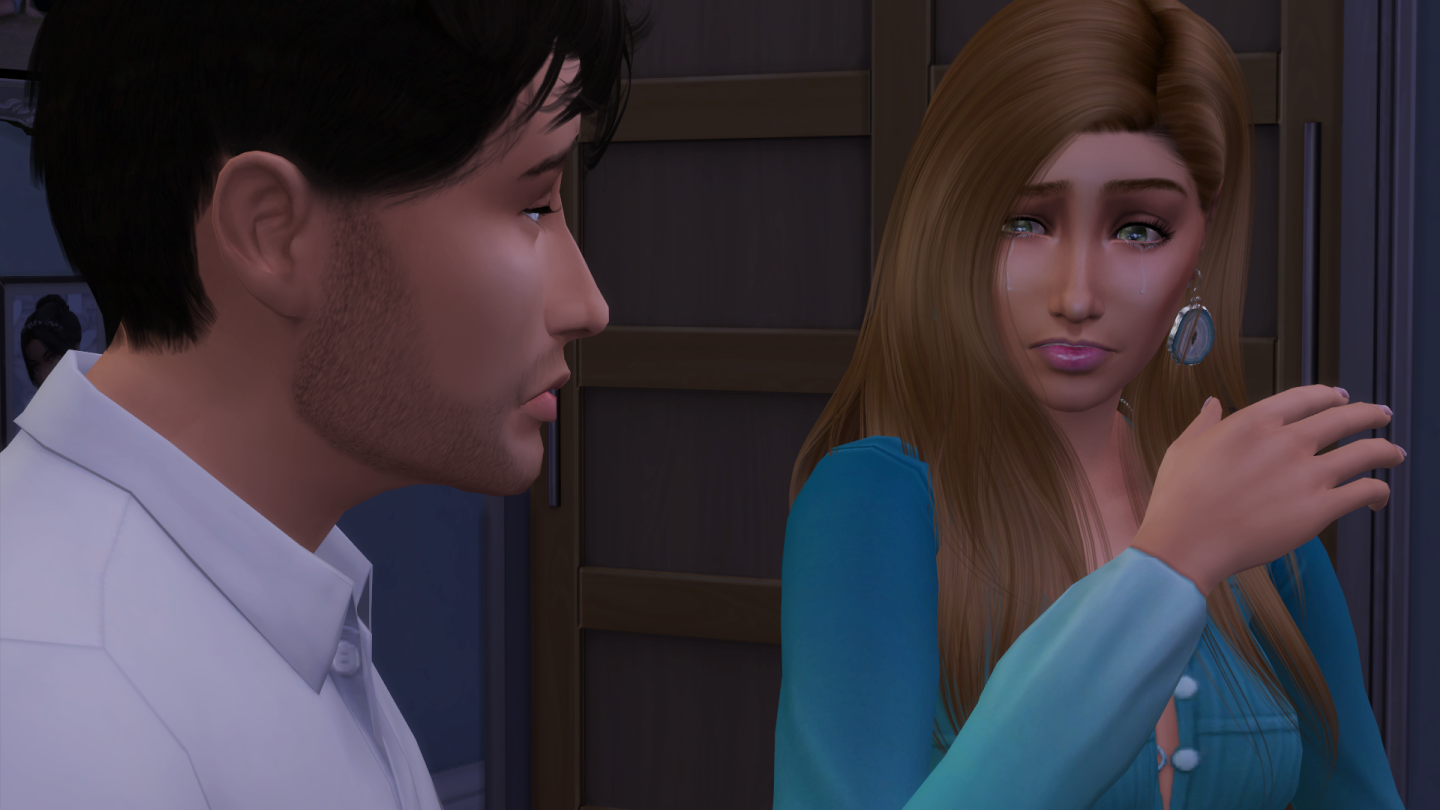 “He didn’t mention a divorce. He said they are getting back together. He’s just been using me.” 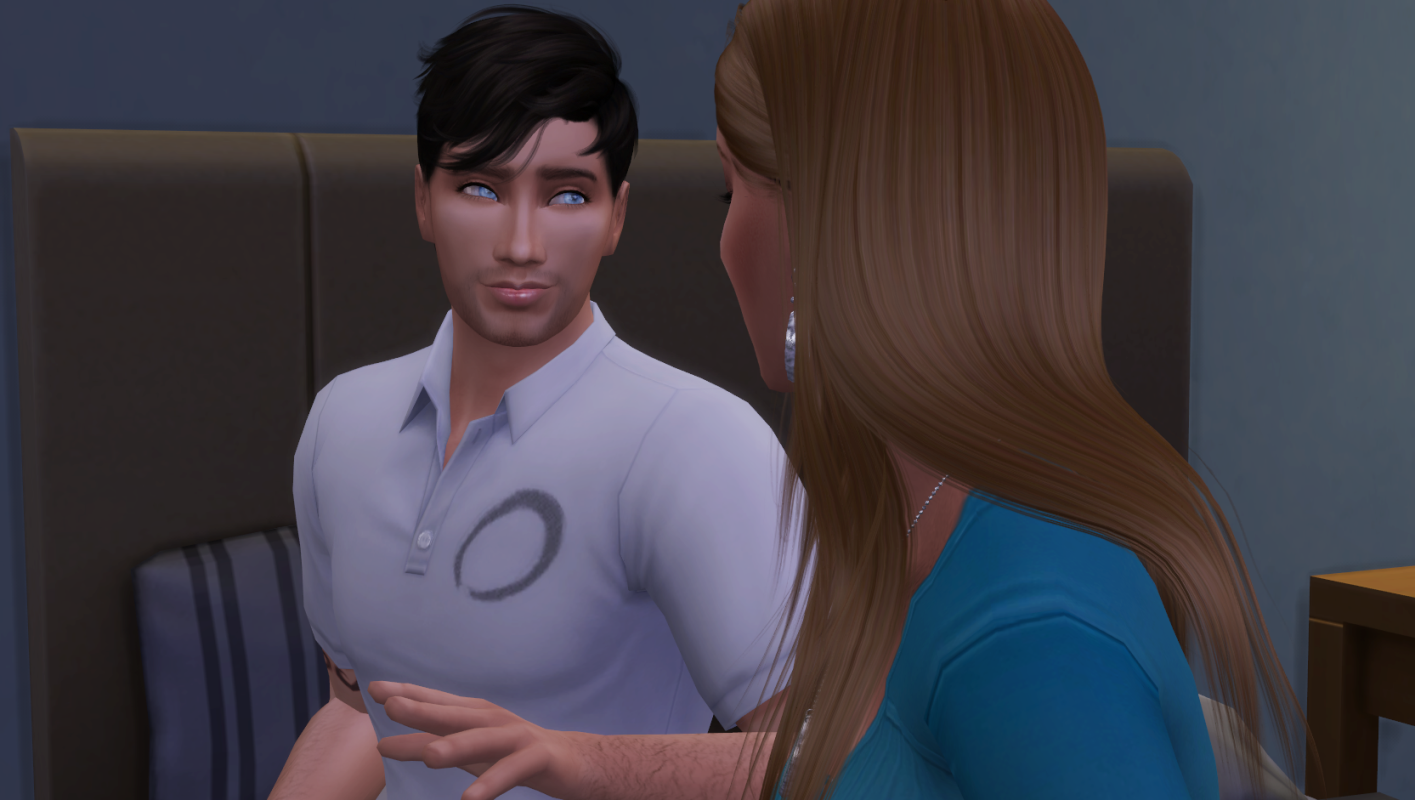 “I don’t think so Rea, you must’ve misunderstood, that’s not what he told me. In fact they both said it was final. She filed the papers last week. As soon as it’s recorded it’ll be official. They’ve been working on it for almost a year.  Why would he lie to you? He’s not going back to her. They hate each other.”

“I didn’t stick around to ask him … wait, you talked to her?”

Well, he didn’t tell her that part, thought Ryan, Shit. “I know her Rea, but I didn’t know her relationship to Evan.” 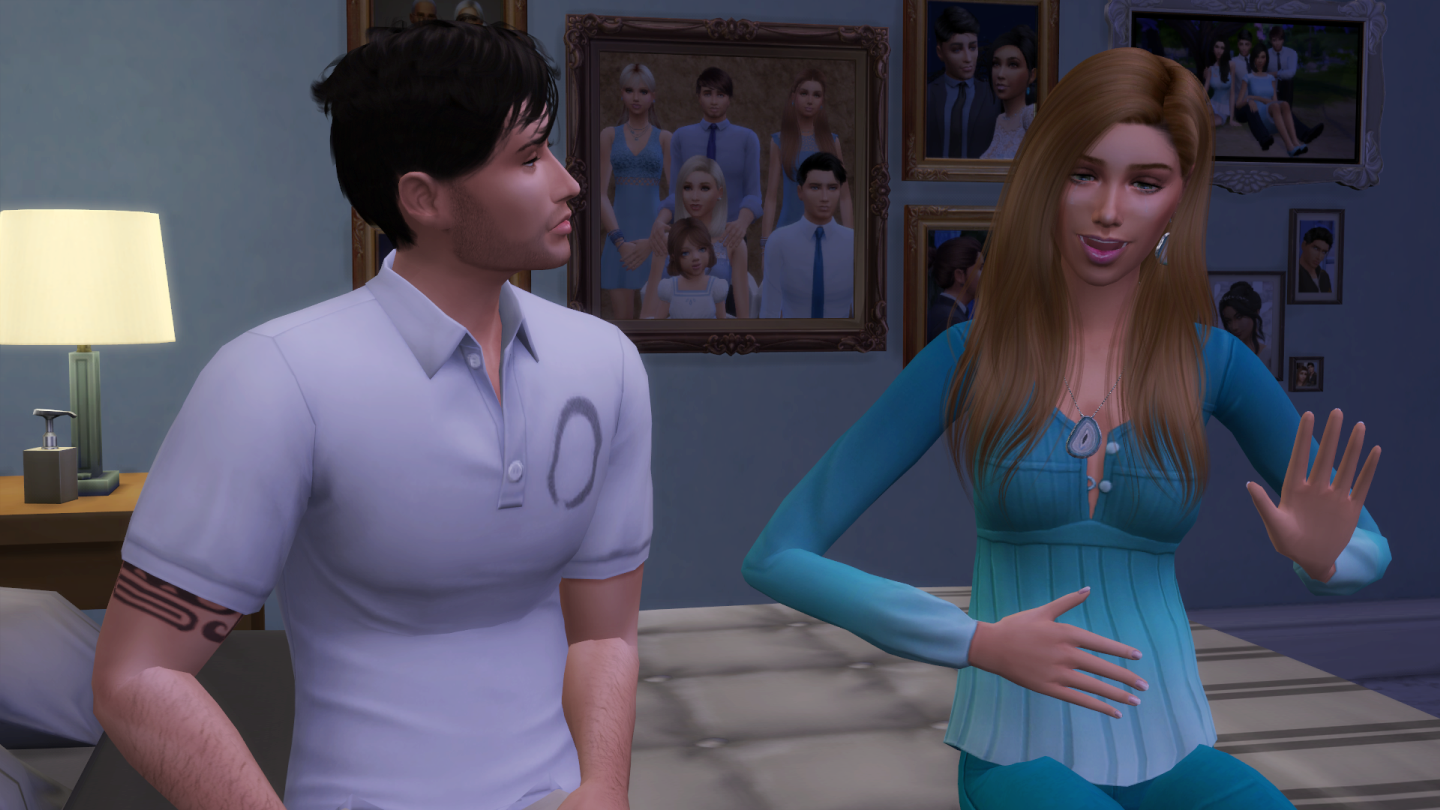 “Oh my god! She’s the girl from San Myshuno? You’ve been banging his wife?” Reagan began to laugh hysterically. Finally she stopped when Ryan didn’t laugh with her. “It’s so not funny,” she said apologetically, “I’m sorry, but we’re both a couple of freaking losers.” 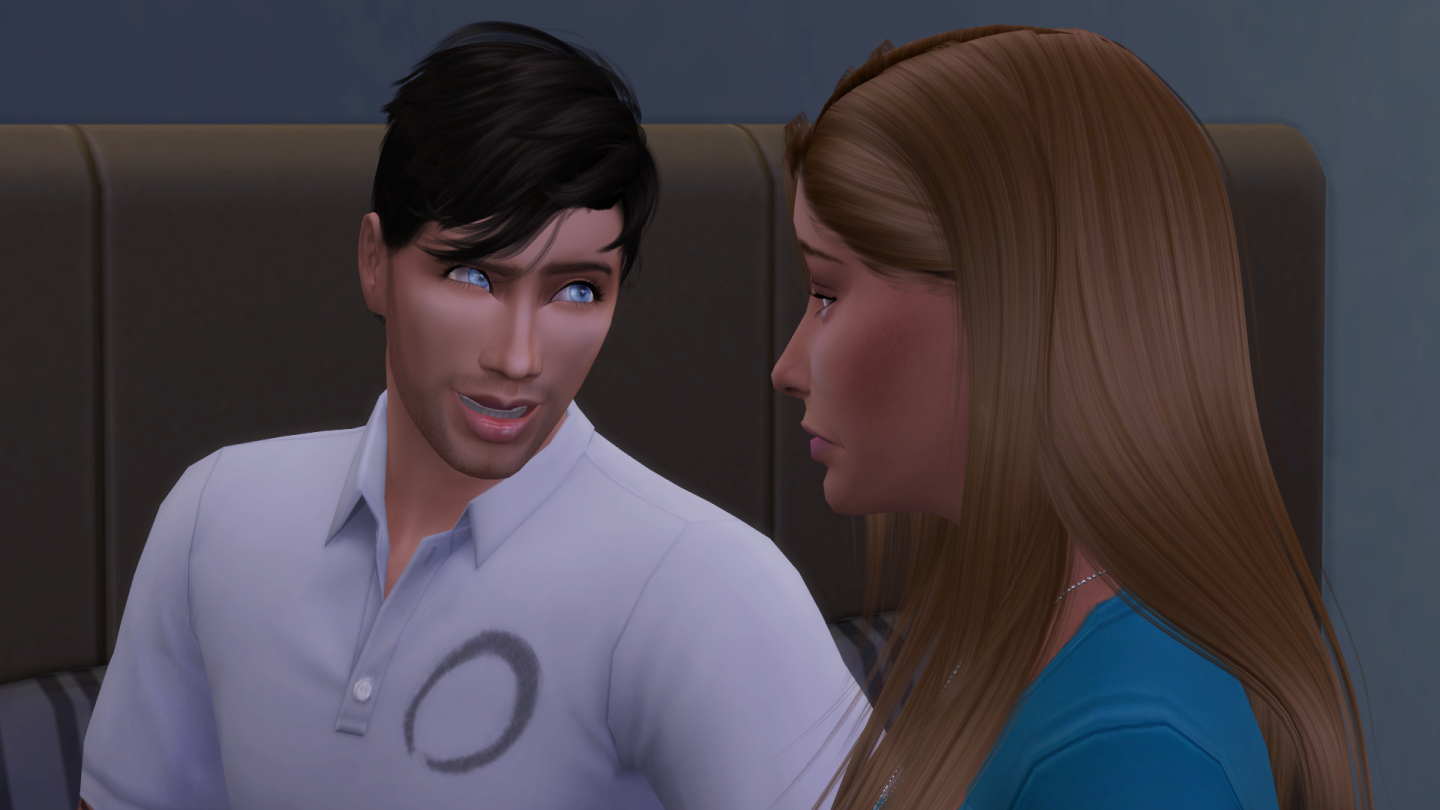 “No it’s not funny, at all. Bel was using me to get to Evan. She wanted the penthouse that he bought while they were married. It’s worth several million – in the heart of San Myshuno.  It’s amazing.”

“He owns a penthouse? And you know it’s amazing, because why?  You’ve been there? This just gets better and better.” 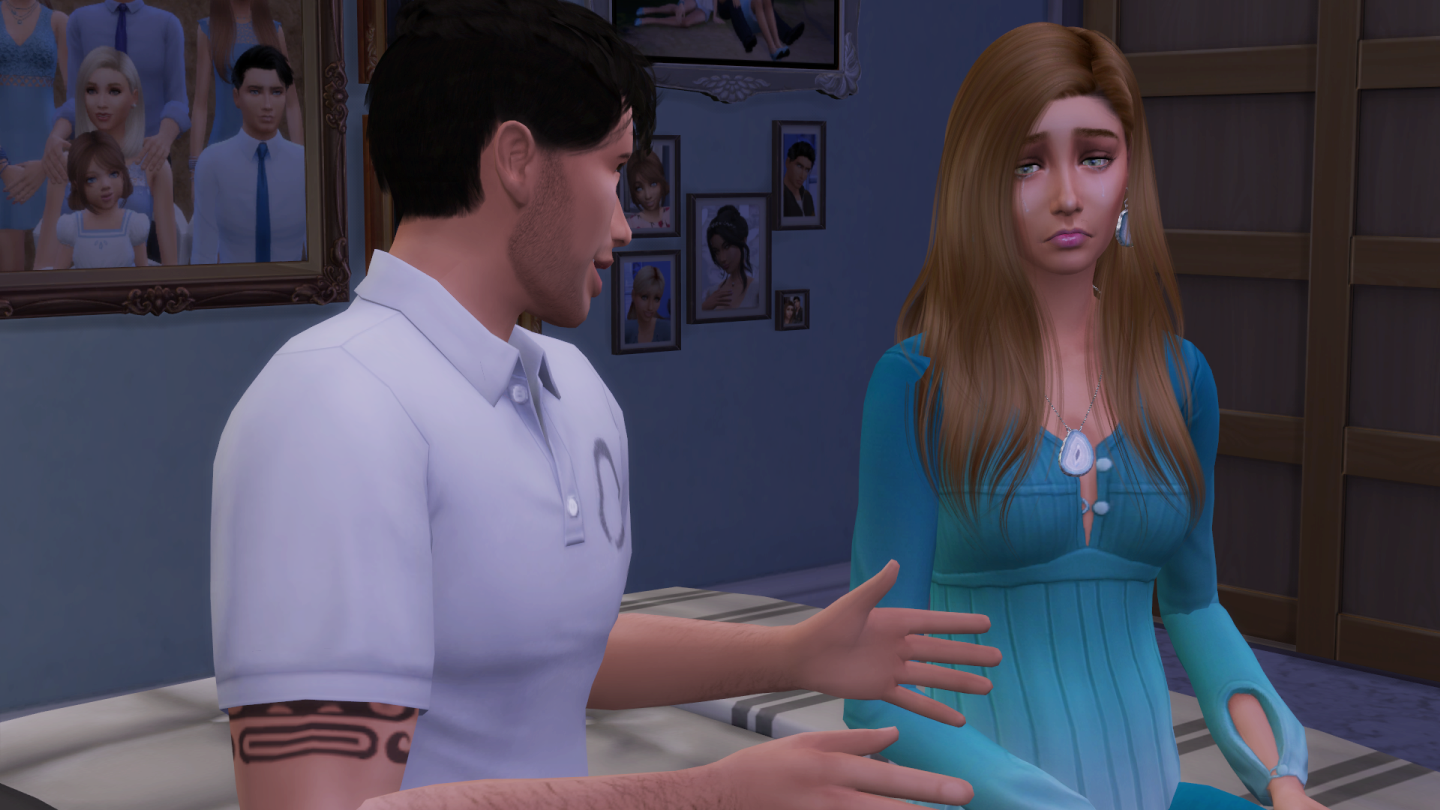 Ryan told Reagan about being conflicted between Rosa and Bel and how he wanted to take Bel on a date. And then about Evan walking in on their conversation. “Something is off about this whole thing. Evan and Maribel have been separated for almost a year, so why would he suddenly tell you a week before his divorce from Maribel was final that he’s getting back with her?  And why lie to you about that at all?  Plus he was a wreck. No, something happened.”

“Yes. She told me to call her Bel, but he called her Mari.” 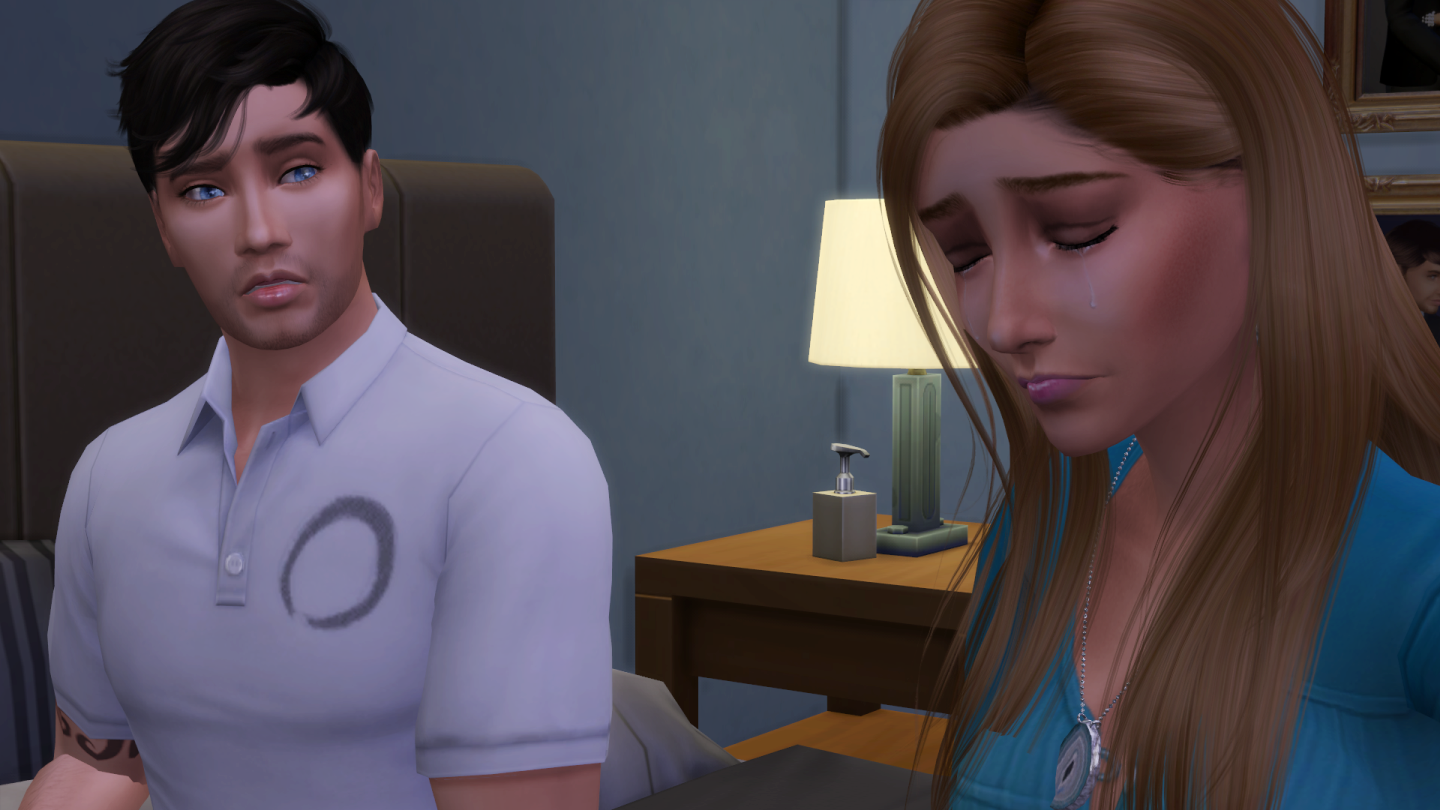 “Oh God.  I remember him arguing with someone on the phone awhile back. About signing some papers. I think he did say Mari. Why did he have to lie to me. And he’s apparently still lying.”

“I don’t know. I think I’m going to pay him a visit and get to the bottom of this shit. And for the record, I was already going to tell Bel to take a hike. Our ‘date’ was more of the same. She’s high maintenance. He did good getting rid of her.” 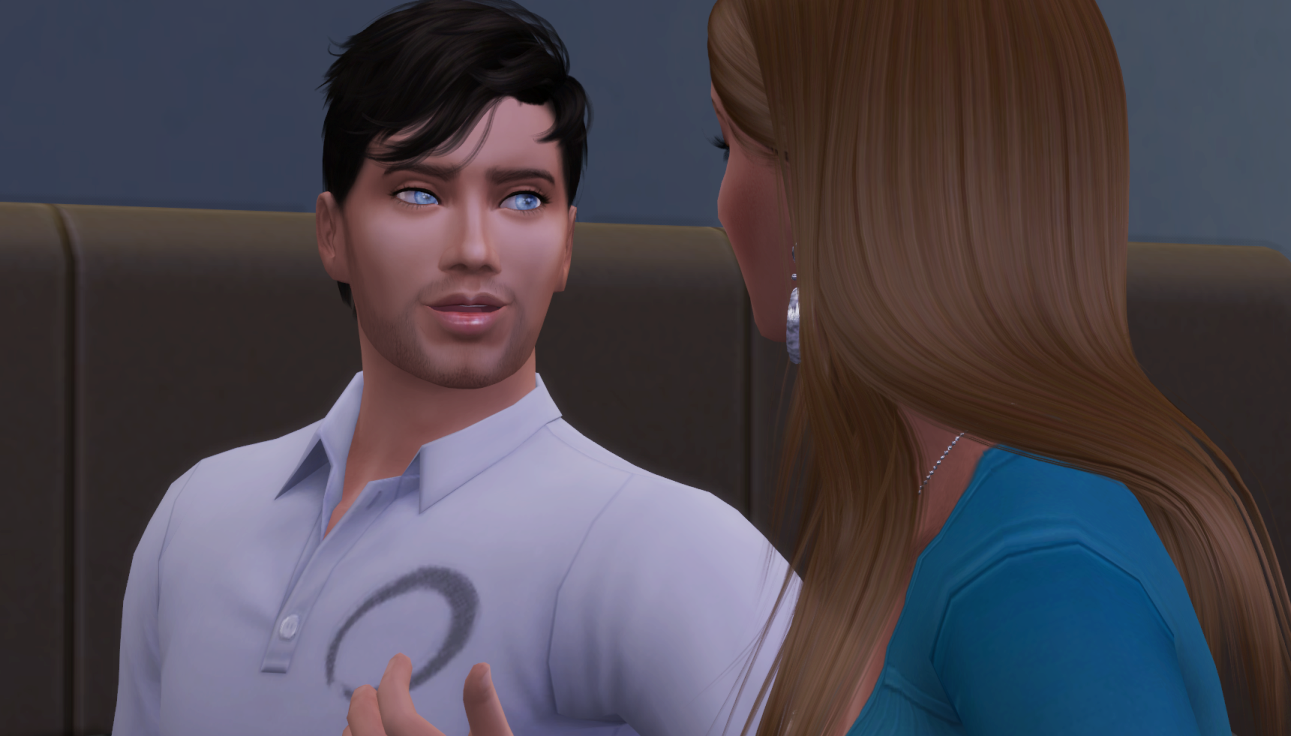 “Rosa is going to give us a shot. We just sorta picked up where we left off, but we’re both in a much better place.” He stopped and huffed out a laugh, “I asked her if she was married.”

“Oh Ryan. I’m so sorry you felt like you had to do that.”

“It’s okay. I just can’t believe Evan, and I really liked the guy. For the record, I told Rosa about Bel. No lies to start out. I thought she was going to walk, but she stayed. Oh, and I punched Evan in the jaw. He would probably be a bloody mess if Rosa hadn’t walked in.”

“You punched him? God Ryan.”

“Sorry. I warned him not to hurt you.” 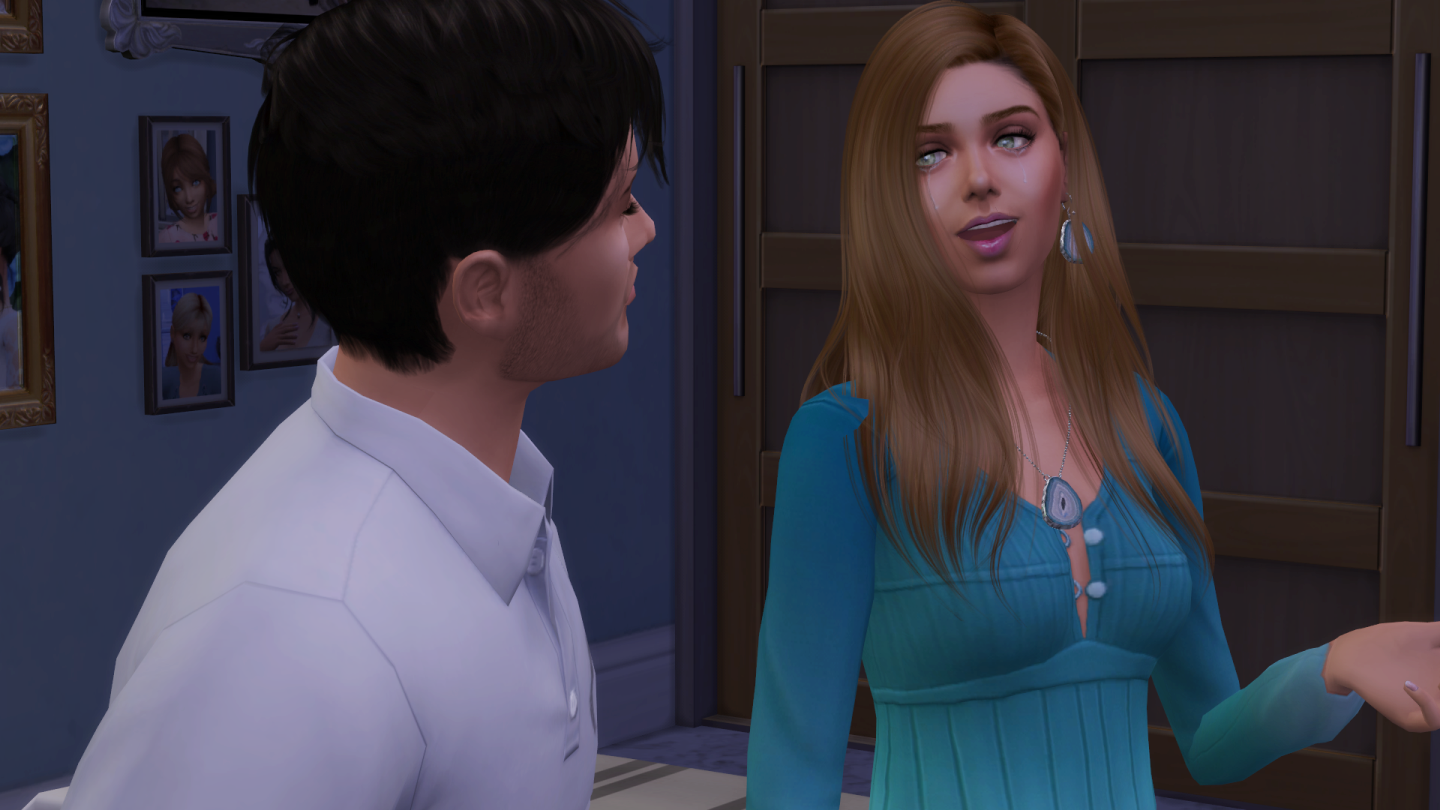 Reagan shook her head. “Poor guy, I slapped him. Then I went to the park to think. I couldn’t come home and face Mom yet.”  Reagan’s face lit up.  “Oh my god Ryan, you’ll never believe who I saw in the park.  Archer Kendall.  He works for BASE and is here to meet with Ami, since they still do security for C&M. I guess he’ll be in Monday to see her.”

“Oh. How is he?” Ryan said the words like they tasted bad. 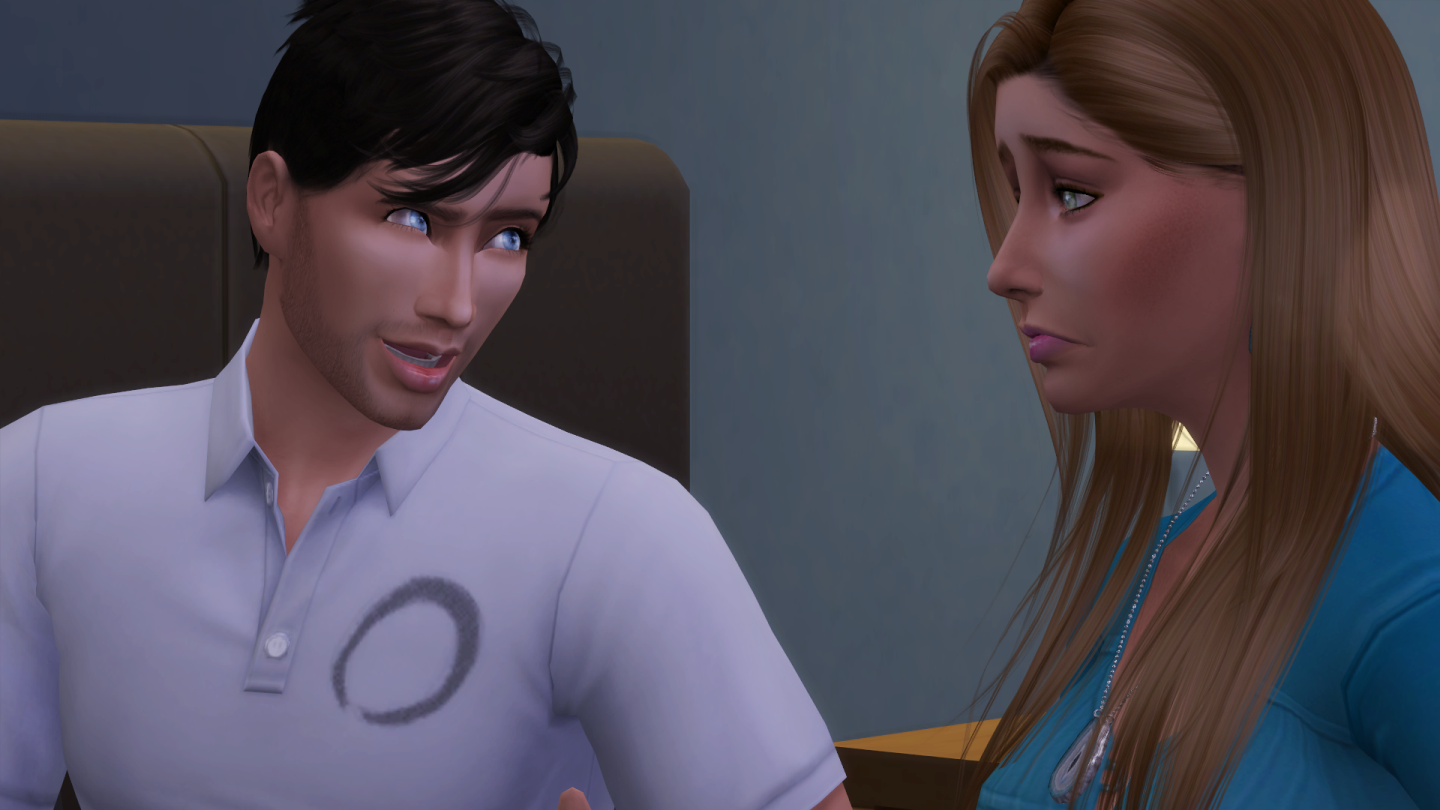 “Manages? Well I guess he does have a few years head start.  Who knew?  Is he still an asshole?”

“God Ryan. He never was. Sadly, just one more of my failed relationships.” Reagan began to tear up. 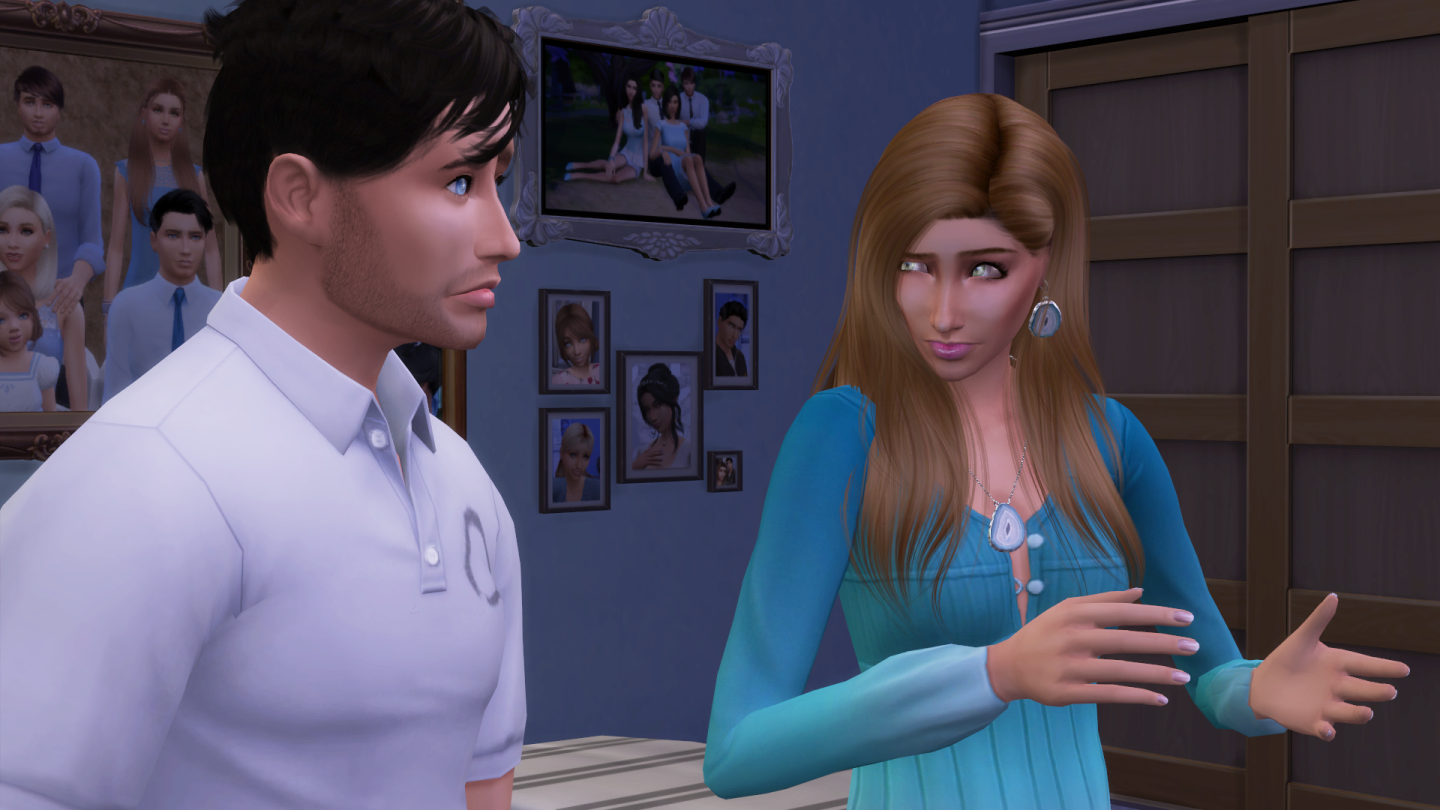 “I should go with you.  To talk to Evan.  You’re right. Nothing is adding up. I’ve had a little time to process things, and talking it through with you, I feel like I deserve answers. And you are right, he was a mess. I’ve never seen him so disheveled. He always looks like he just stepped off the cover of GQ.  I thought it was because he was sick. But maybe there’s more.”

“No. You should stay here. In case it gets ugly.”

“Don’t beat him up Ryan. I mean it. Mom said he was a ladies man and a flirt. That he came onto her all the time. Maybe she was right.” 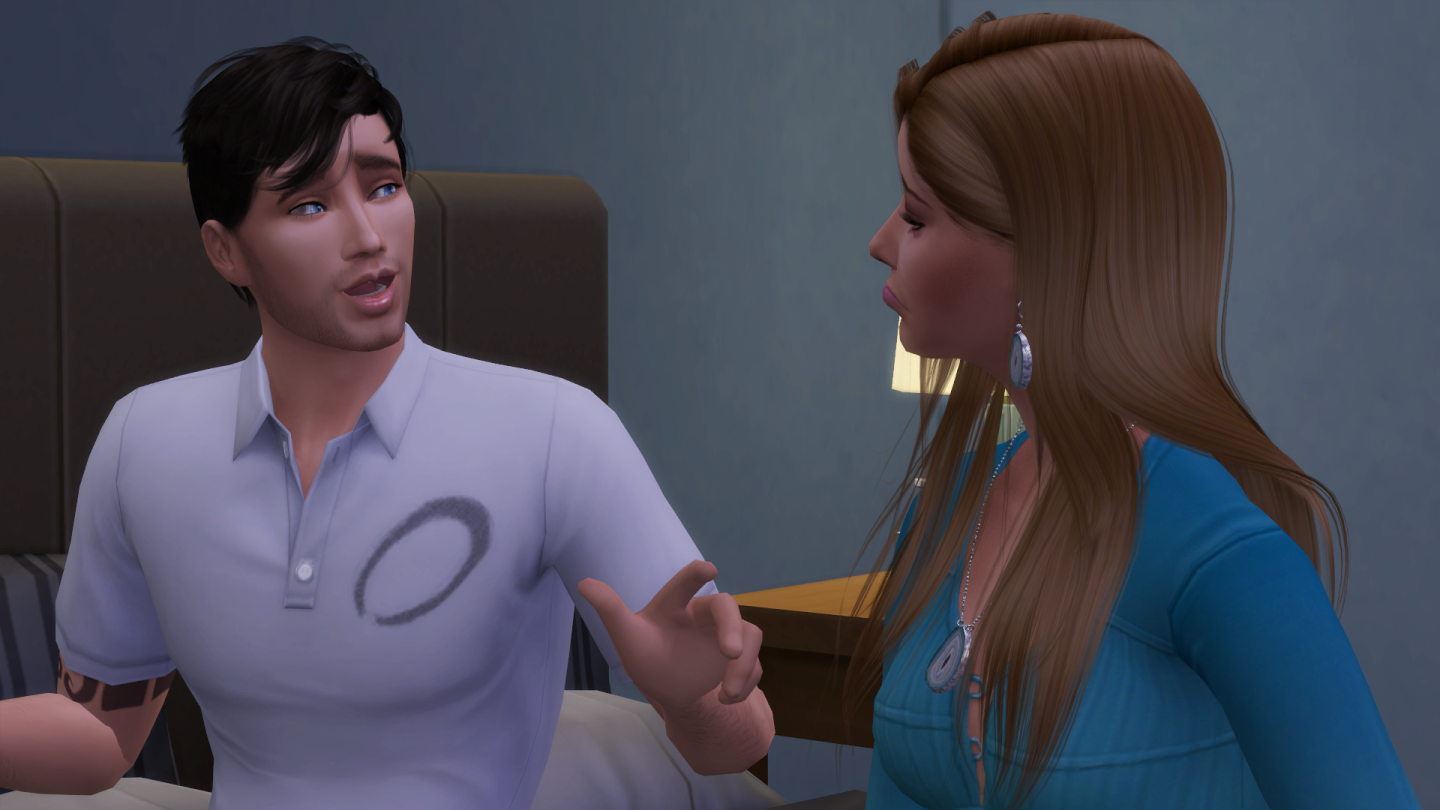 “Reagan, Evan hates her. He doesn’t trust her. Frankly neither do I.  So there’s no way he would come on to her. That’s just sick.”

“But why would she say he did?”

“Why does she say most of what she does? You should’ve heard the way she greeted me. Where was she going?” 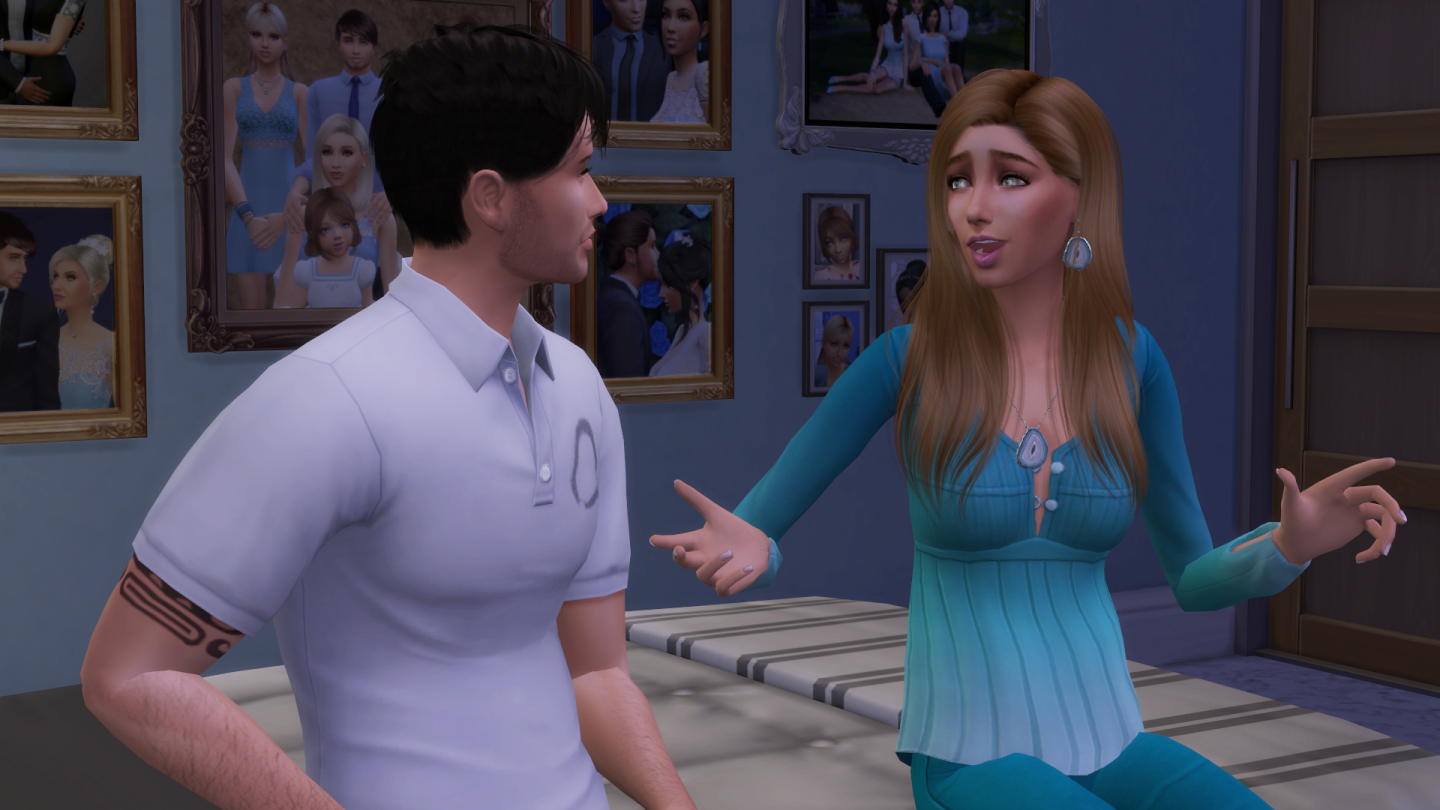 “I told her to go car shopping without me. I couldn’t deal with her. She’s acts happy that he’s married. She even said I told you so.”

“She was threatened by him,” said Ryan, “He took your attention away from her. That’s all that is. She’s jealous. Wait … car shopping, as in an automobile?” 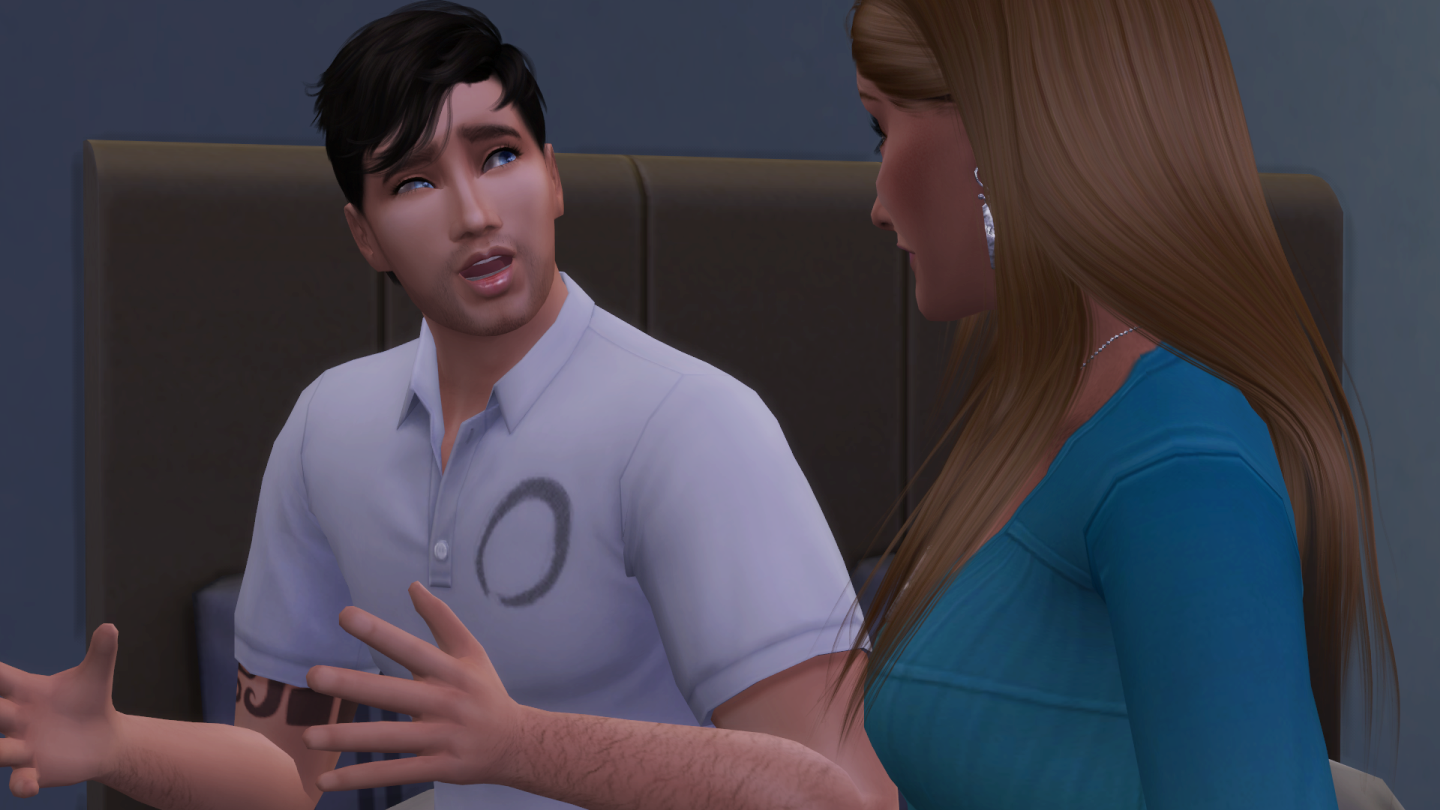 “Holy shit. And you told her?” Ryan was incredulous.

“Yeah. But, you don’t understand Ryan, she has no one. And when I’m gone, she’s stuck here, alone, with no transportation. She has no money. So I told her about the money and promised to take her car shopping last night, before my world fell apart this morning. She went without me.”

“Bitch,’ muttered Ryan.He sighed and pushed himself off the bed. “Okay. I gotta go. I’ll see if I can find out what’s up and let you know why Evan suddenly got a conscience and is telling us both different stories. You gonna be okay Rea?” 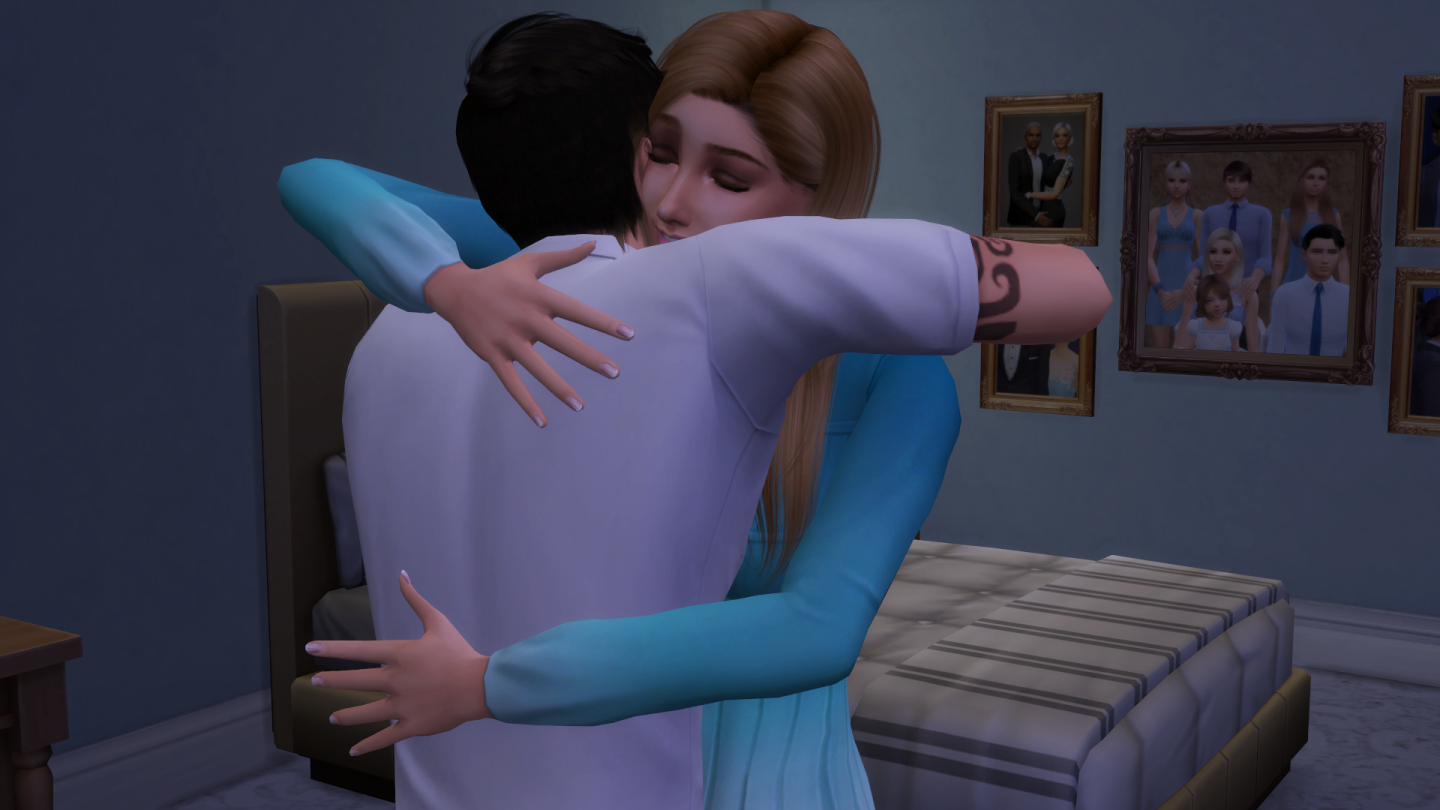 Ryan hugged his sister before he left. “I will.  I love you Rea,” he said, “We’ll figure this out.”