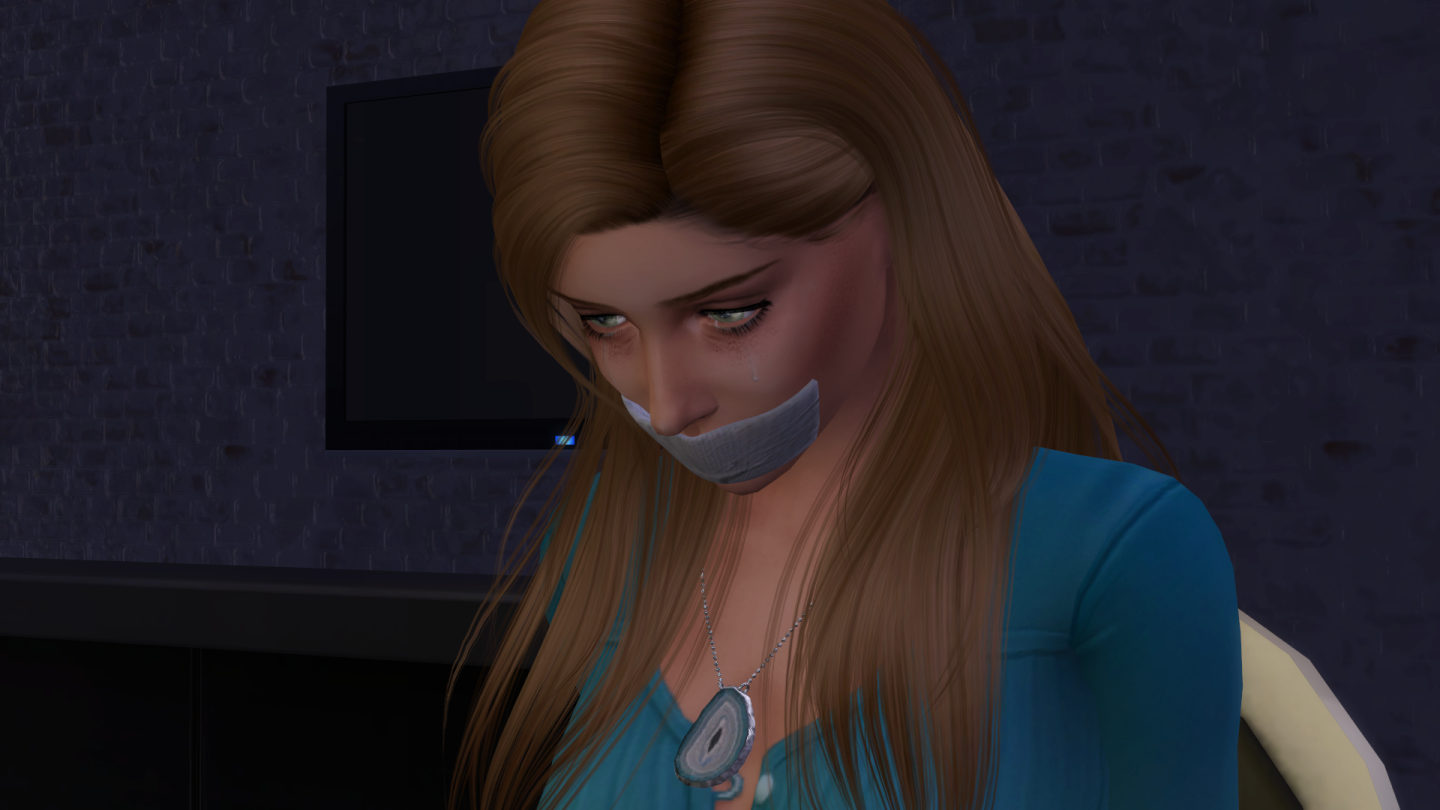 Reagan began to whimper again.  She was terrified.  Her own mother was working together with the woman that took her.  When she came into the club room, Reagan thought she was going to help her. She couldn’t have been more wrong. 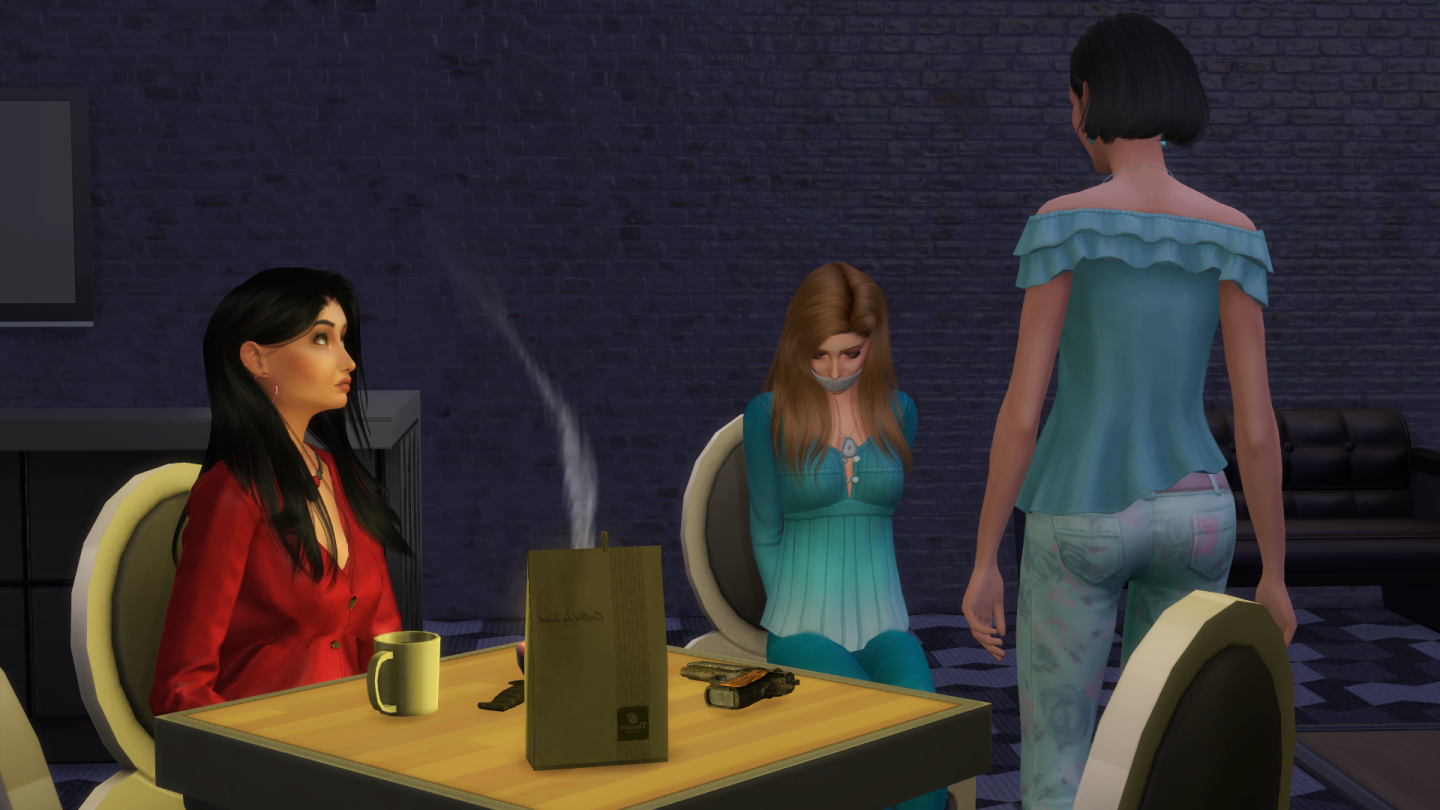 The lady who drugged her and tied her up was pacing back and forth.  She stopped and glared at her. “Shut up!” she yelled, her eyes wild and feral. “I’m sick of your sniveling. No wonder your mother can’t stand you.”

Her mother looked over at her,  “Now Reagan,” she said, her words honeyed, “be a good girl. Daddy’s going to be here soon and make it all okay.” 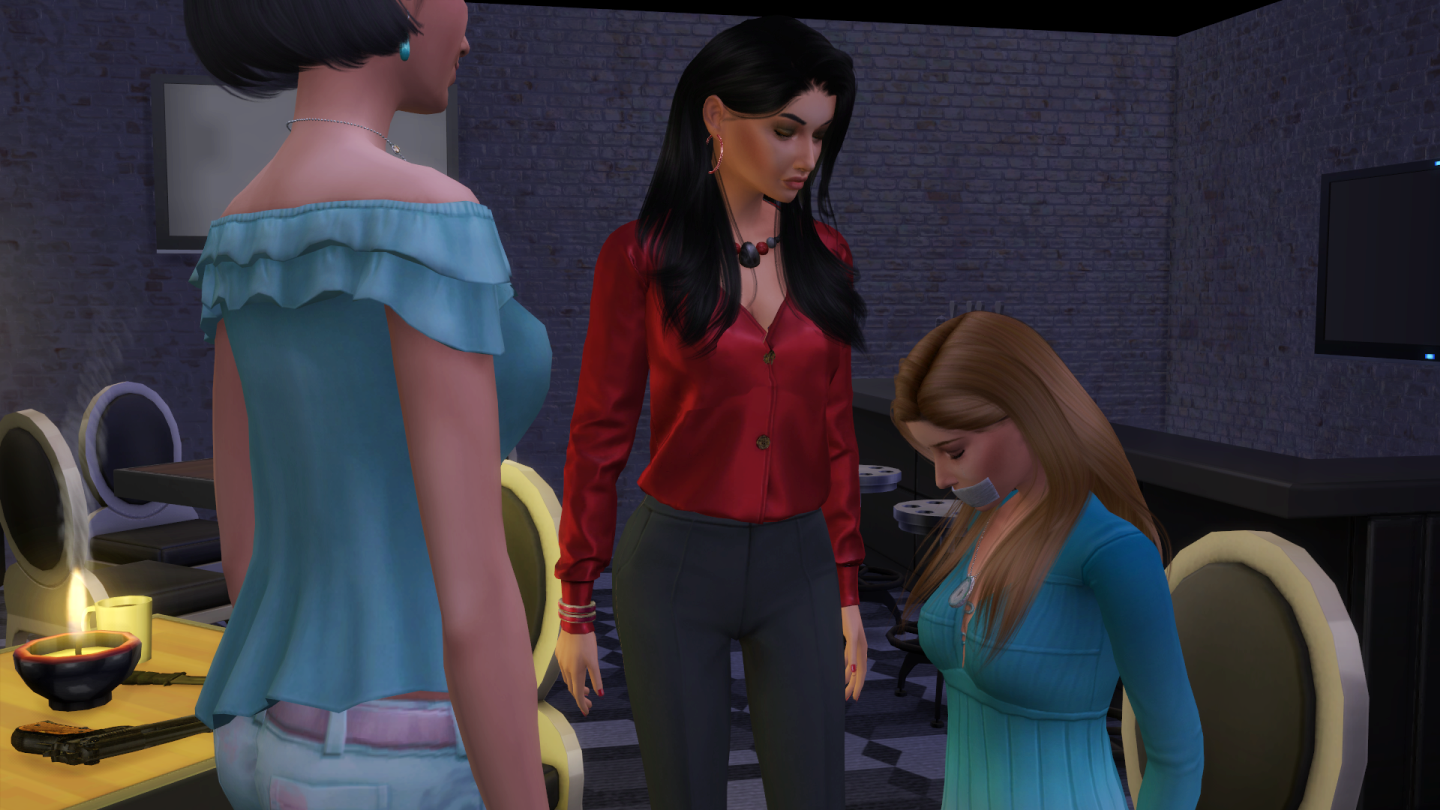 The lady with the gun grunted her displeasure, but her mother kept talking.  “Now, sweetie, this is how it’s going to work. I’m going to hold this knife on you while Daddy let’s Viv tie him up. Then we will take our leave with the money and I’ll be out of your pitiful life.”

Reagan didn’t dare look up for fear of being slapped again. She has a name, thought Reagan through her fog, it’s Viv. Her mother kept talking, but she wasn’t really registering her words until she said Daddy. 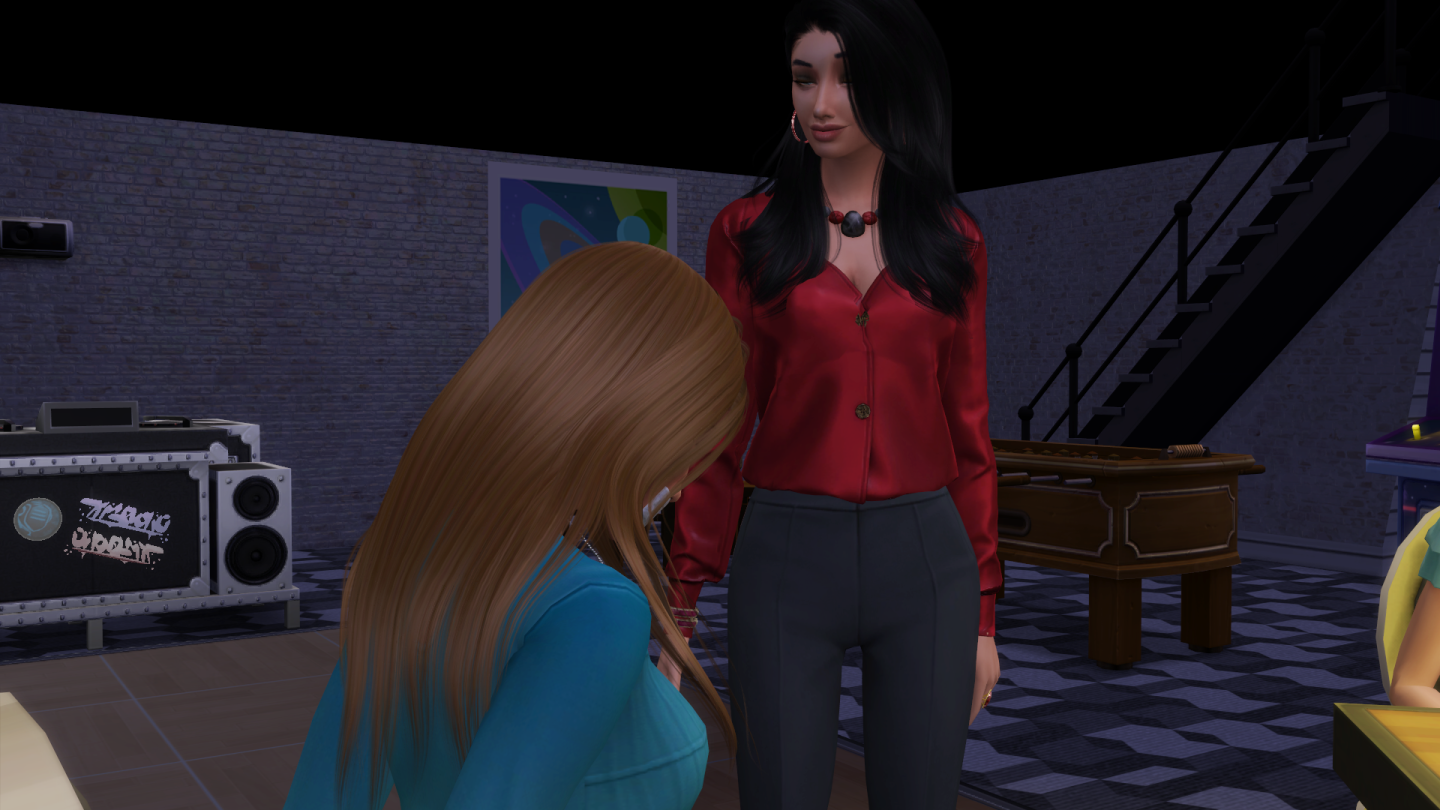 “Eventually, someone will find you, but we’ll be long gone. Easy peasy. But, if Daddy decides to cause problems, or if he isn’t alone, he’s a dead man, and then you’ll have to go with us. Sucks for all of us.” 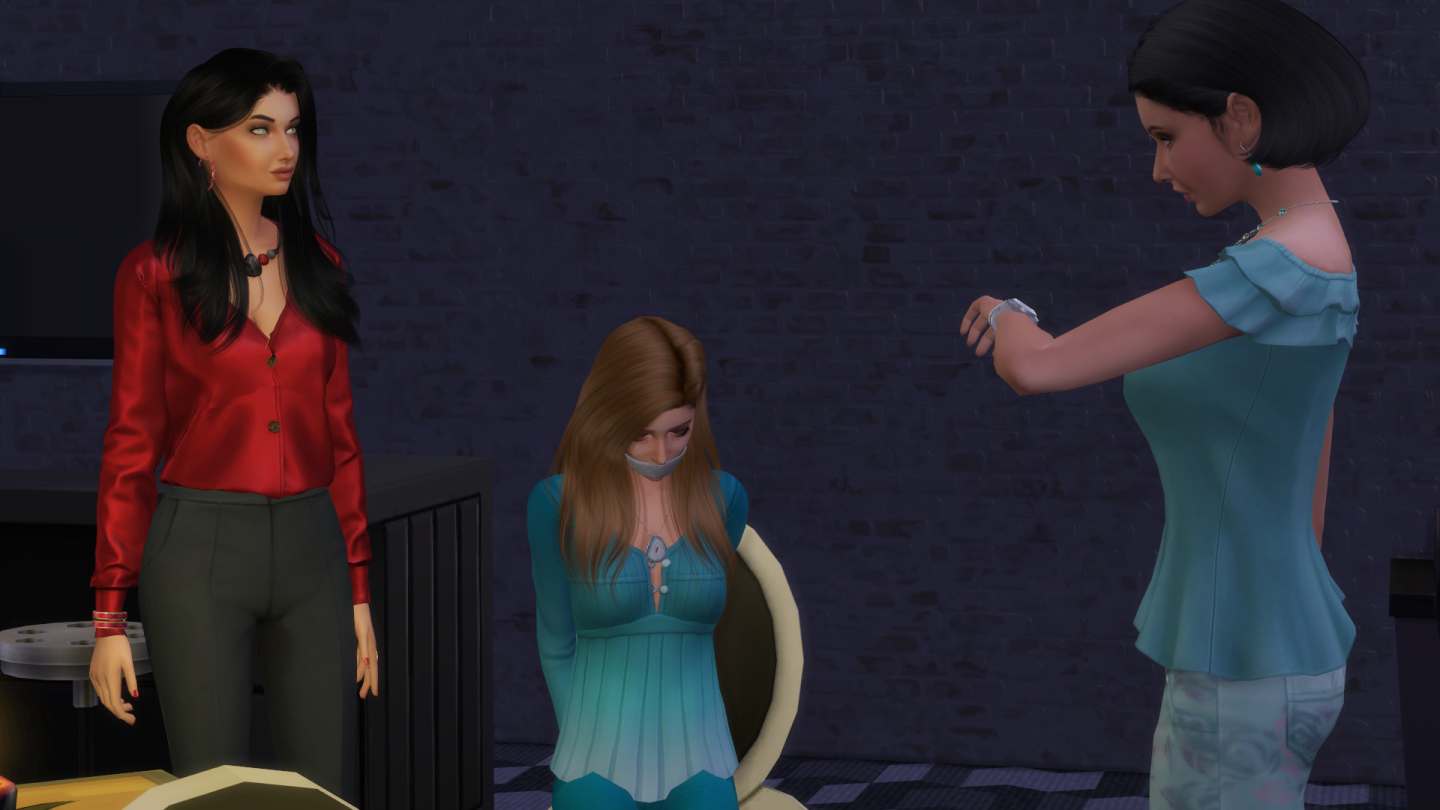 Viv looked at her watch. “Okay. It’s showtime…” she said, “I’m going up to make sure he’s alone, then I’ll escort him down.”   She picked up the gun and left.  Her mother grabbed the knife.

Reagan could barely hear the voices on the stairwell over the sound of her pounding heart.  She was shivering, but she didn’t know if it was from fear or because she was cold. 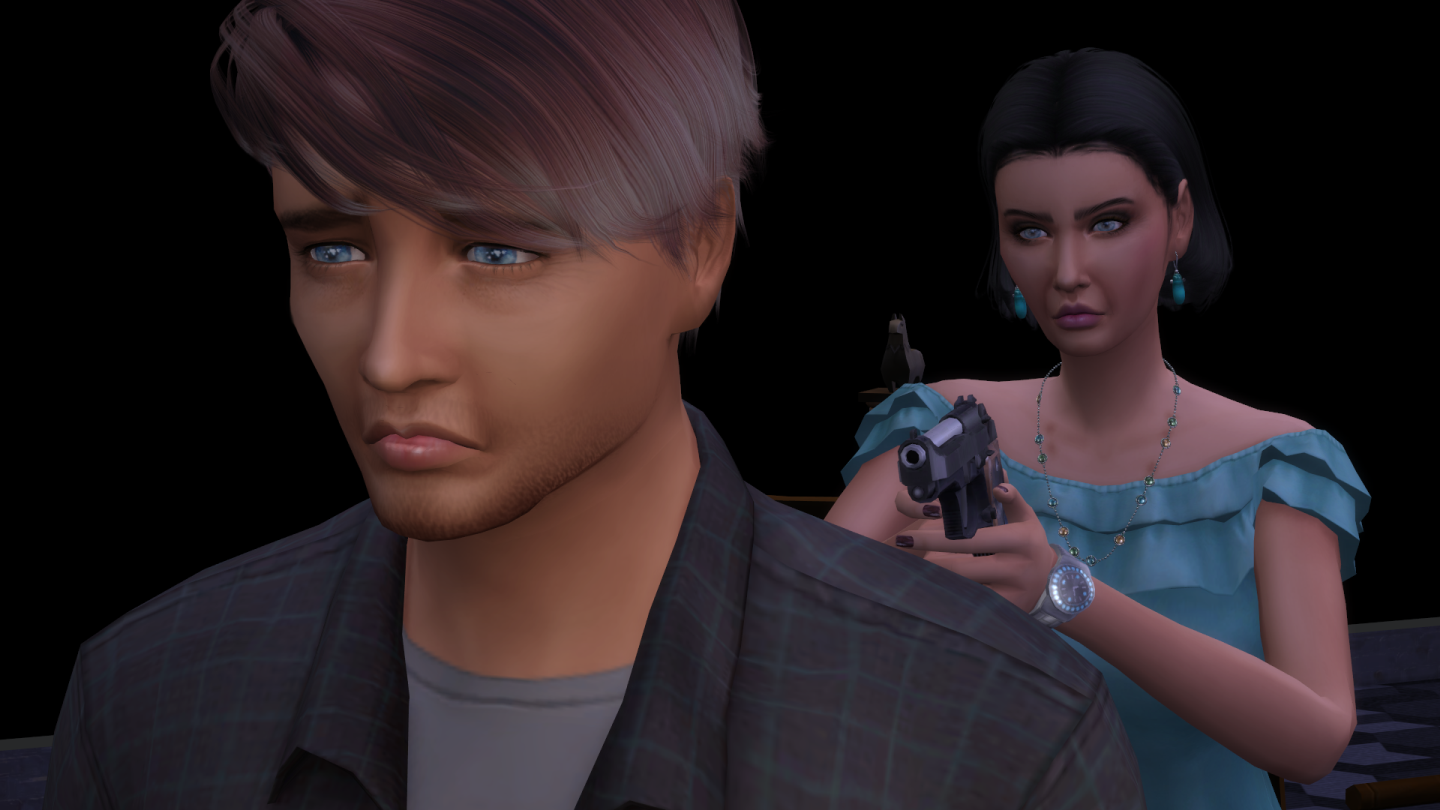 When she saw her father coming down the stairs, followed by Viv with a gun pointed at his head, she wanted to call out to him but the tape on her mouth prevented any sound from escaping and she began to panic, barely able to breathe.

Her mother poked her in the ribs with the knife. “Shut up, and be still,” she growled out.

When they got to the bottom of the stairs, Viv began to give orders. “Stop right there. Now put the bag down – slowly.” 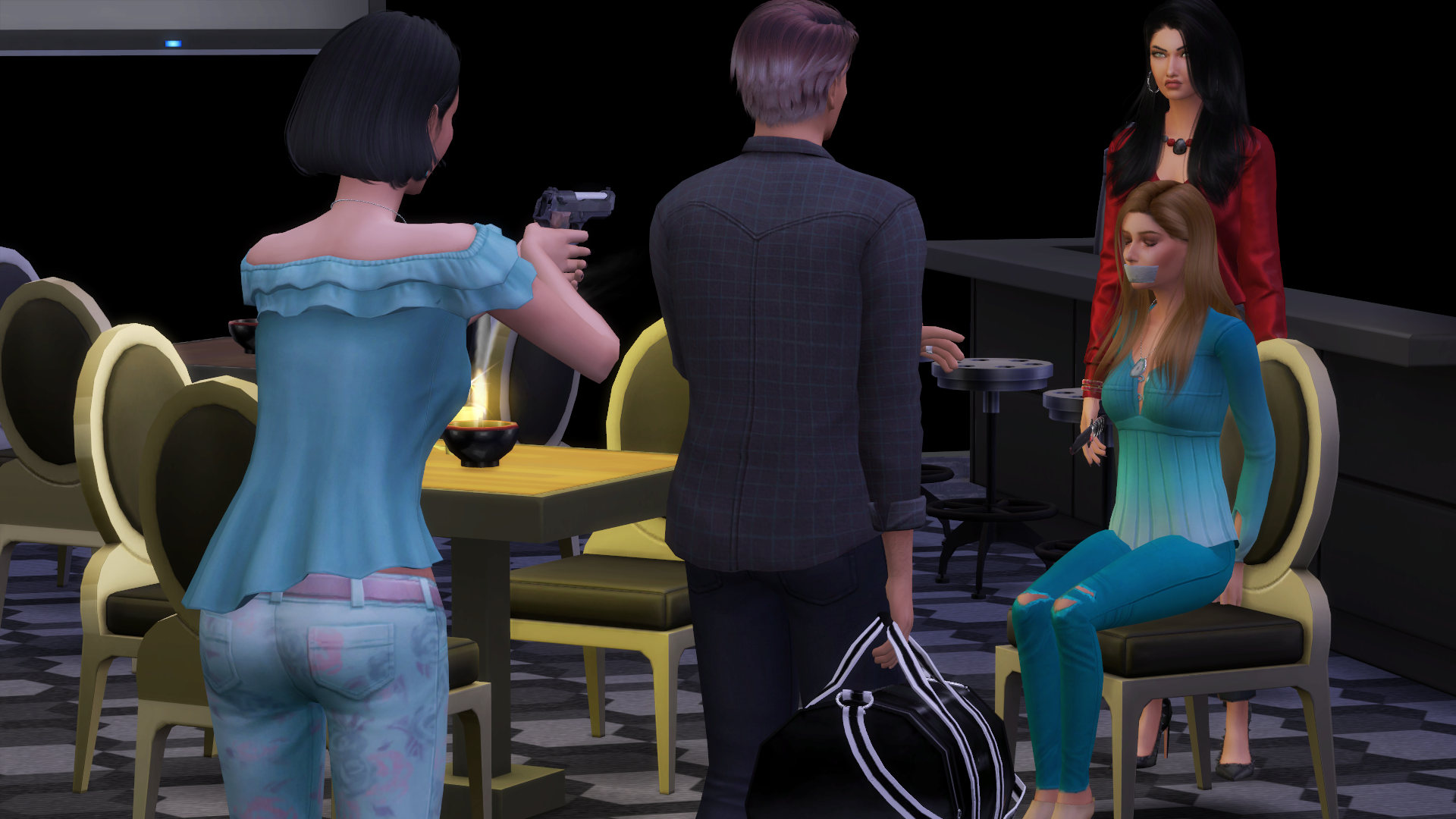 “Reagan, baby,” said her father when he saw her. The pain in his voice cut through her like the knife her mother held.

“Shut up and put it down!” yelled Viv and her father quickly did exactly as she said.

“Now open it,” she commanded and Cole reached down to unzip the bag. 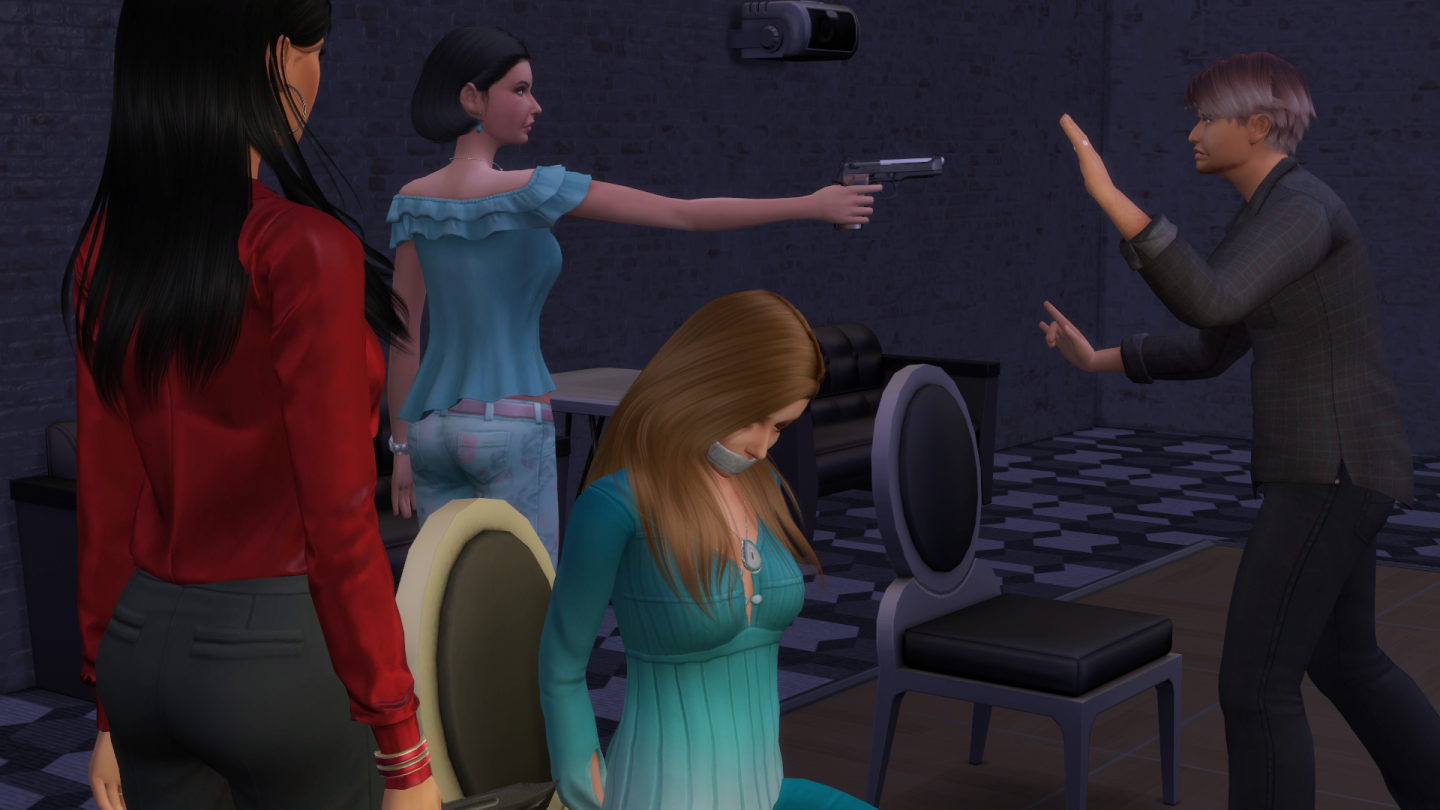 “Okay, get over there and sit down!” said Viv, motioning with the gun to another chair close to Reagan.   Cole hesitated and looked at Reagan. 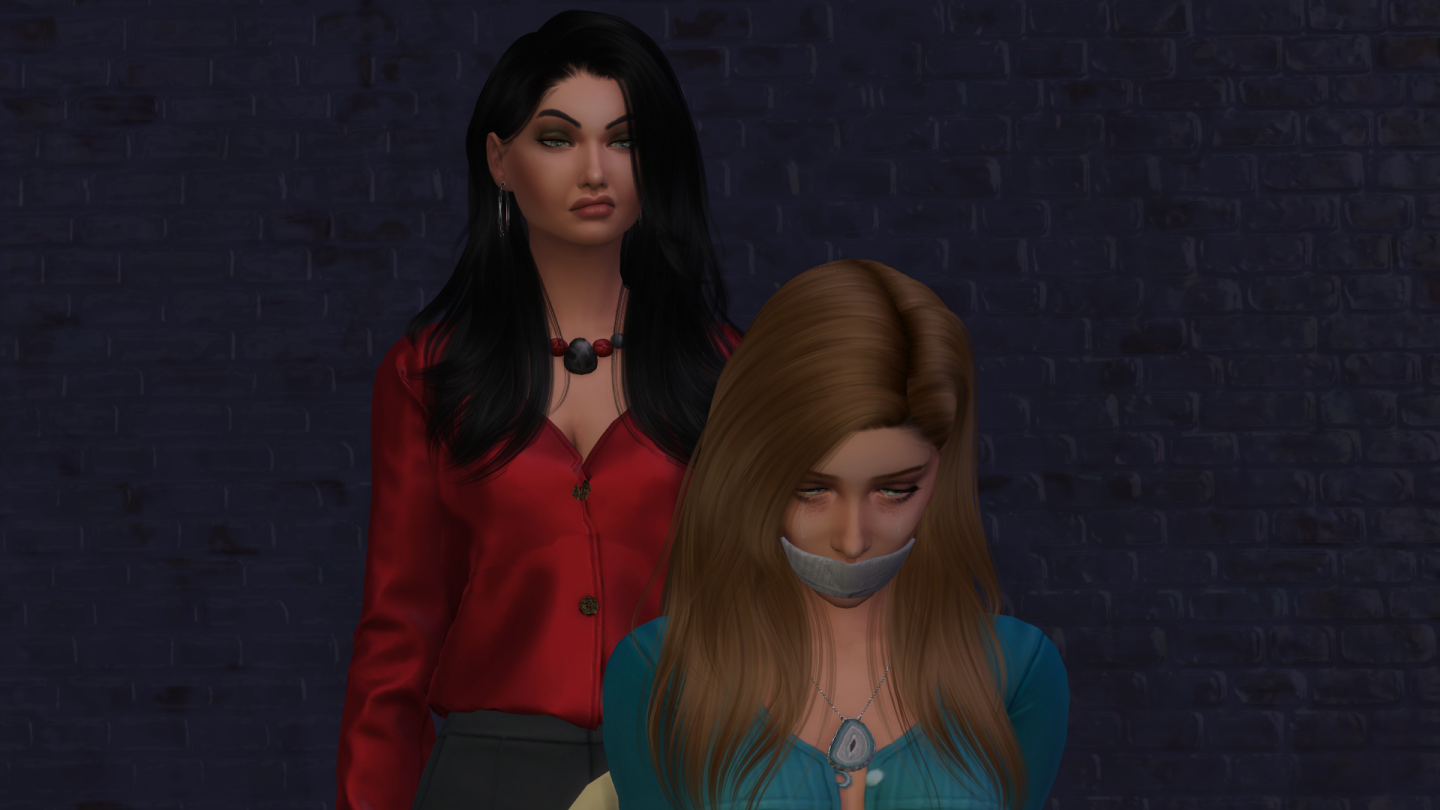 “Sit down Daddy, or I’ll cut her!” sneered Avery.

Cole immediately sat in the chair throwing daggers at his ex-wife with his eyes.

“Avery, I’ll give you the pleasure,” said Viv, her tone snarky, “Tie him up.” 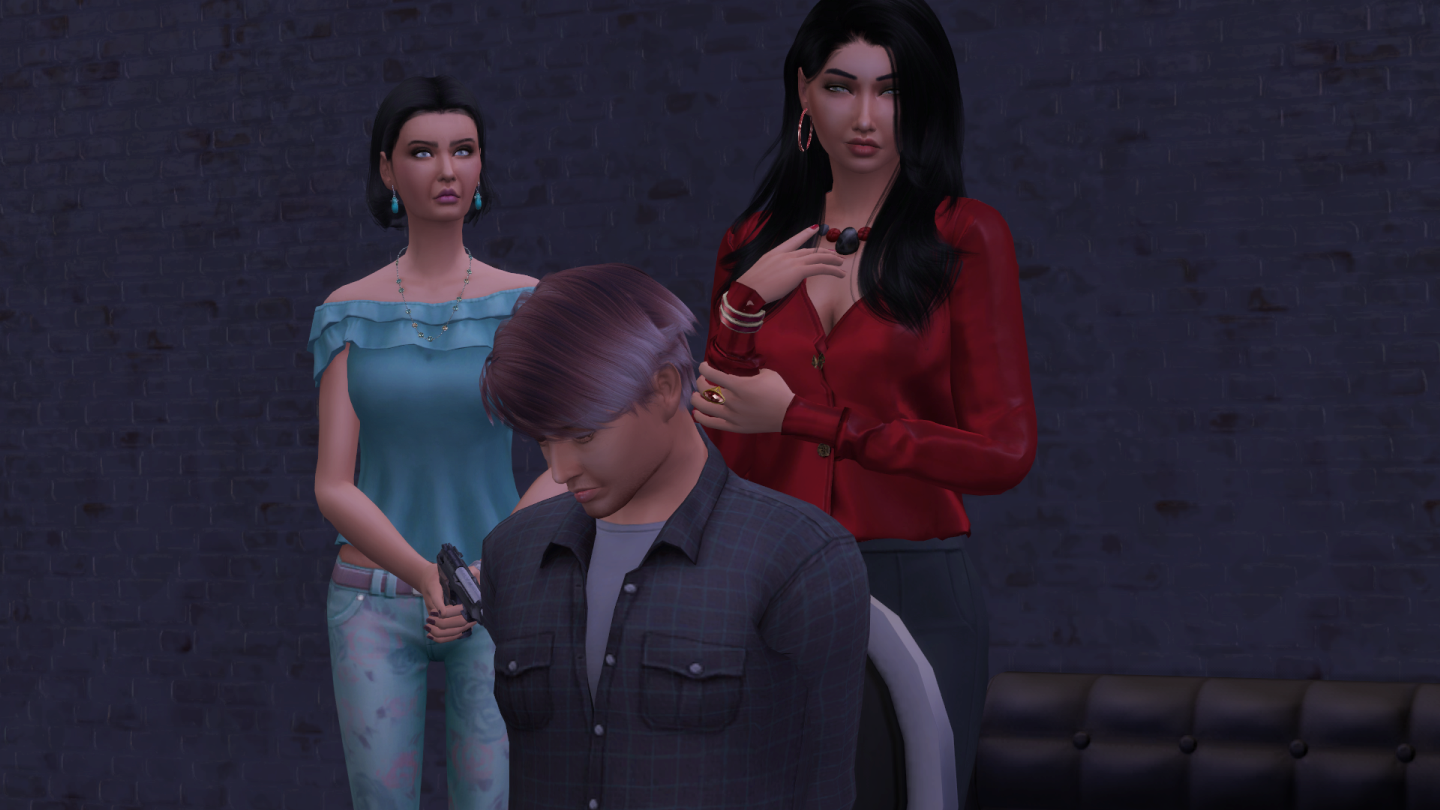 Avery grinned and put her knife down. She tied Cole’s hands behind his back while Viv held the gun on him.  After she was done she whispered in his ear, “You know, we shoulda tried this while we were married. It might’ve been fun. I know Evan enjoyed it.”

“I hope you rot in hell,” said Cole.  Avery laughed and walked back over to Reagan.

“Fuck, someone’s on the stairs!” shouted Viv and jerked Cole out of the chair, placing him in front of her as a human shield. She pointed the gun at his head. “You stupid fuck! You’re a dead man.” 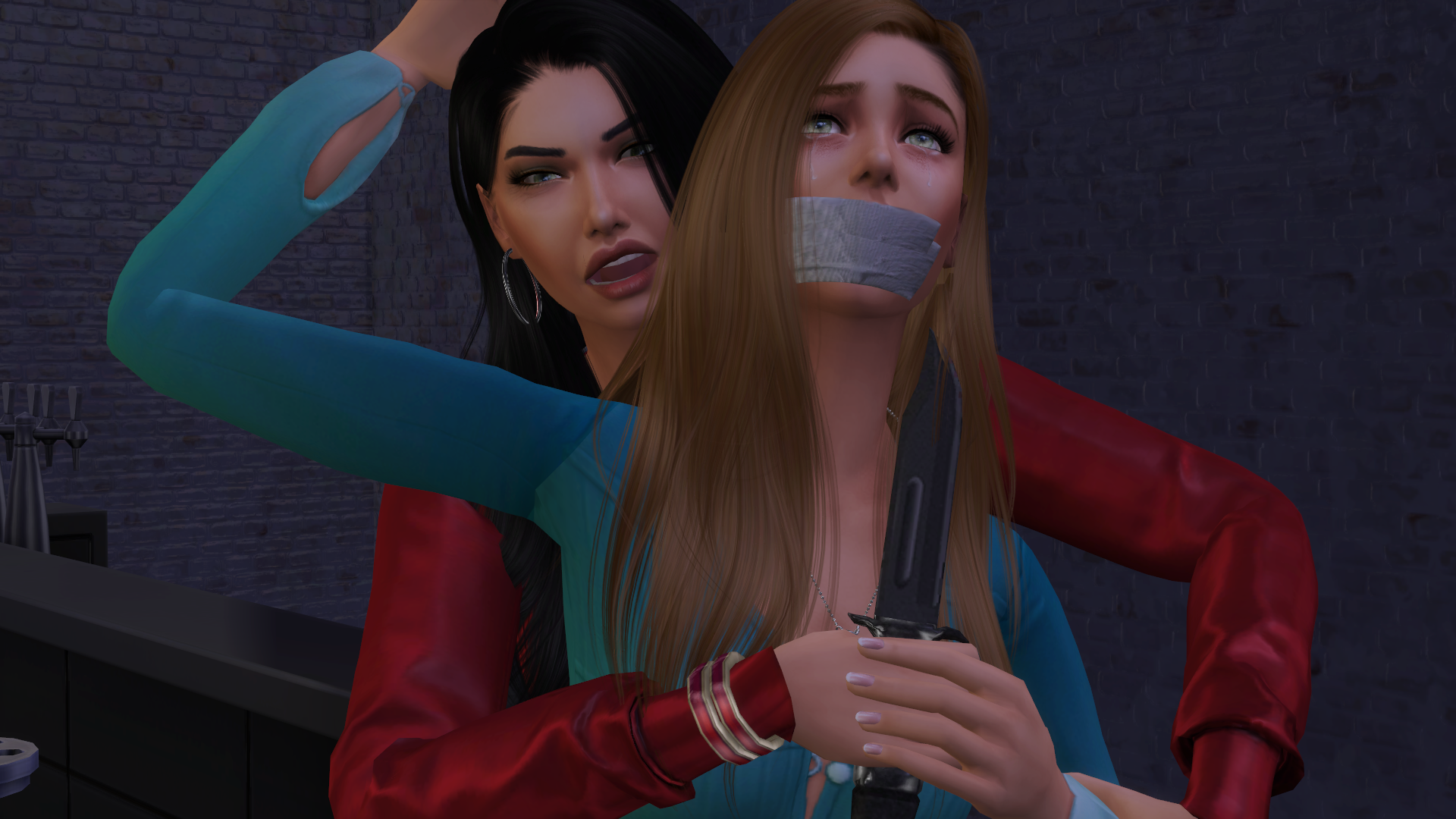 Avery pulled Reagan from her chair as well.  When she started to struggle, she put the knife to her throat. “Stop it you little brat!” she yelled.

Reagan tried to scream but couldn’t do anything except watch in terror as Viv pushed the gun against her father’s head. 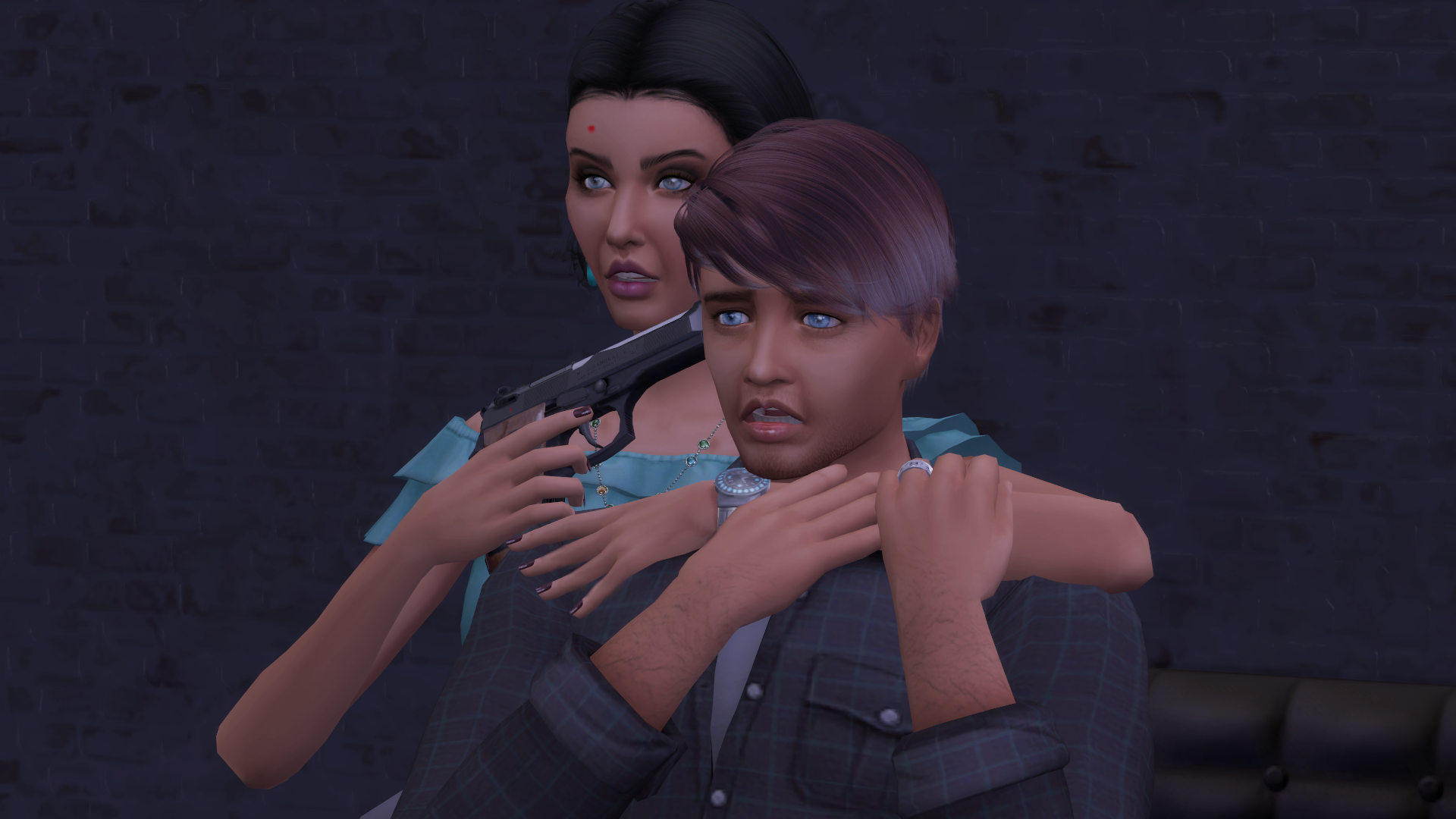 “Grab the bag, stay in front of me,” she ordered Cole. “We’re walking out of here.” Then she yelled out, “Mother fuckers, get off the stairs, or he’s dead!” 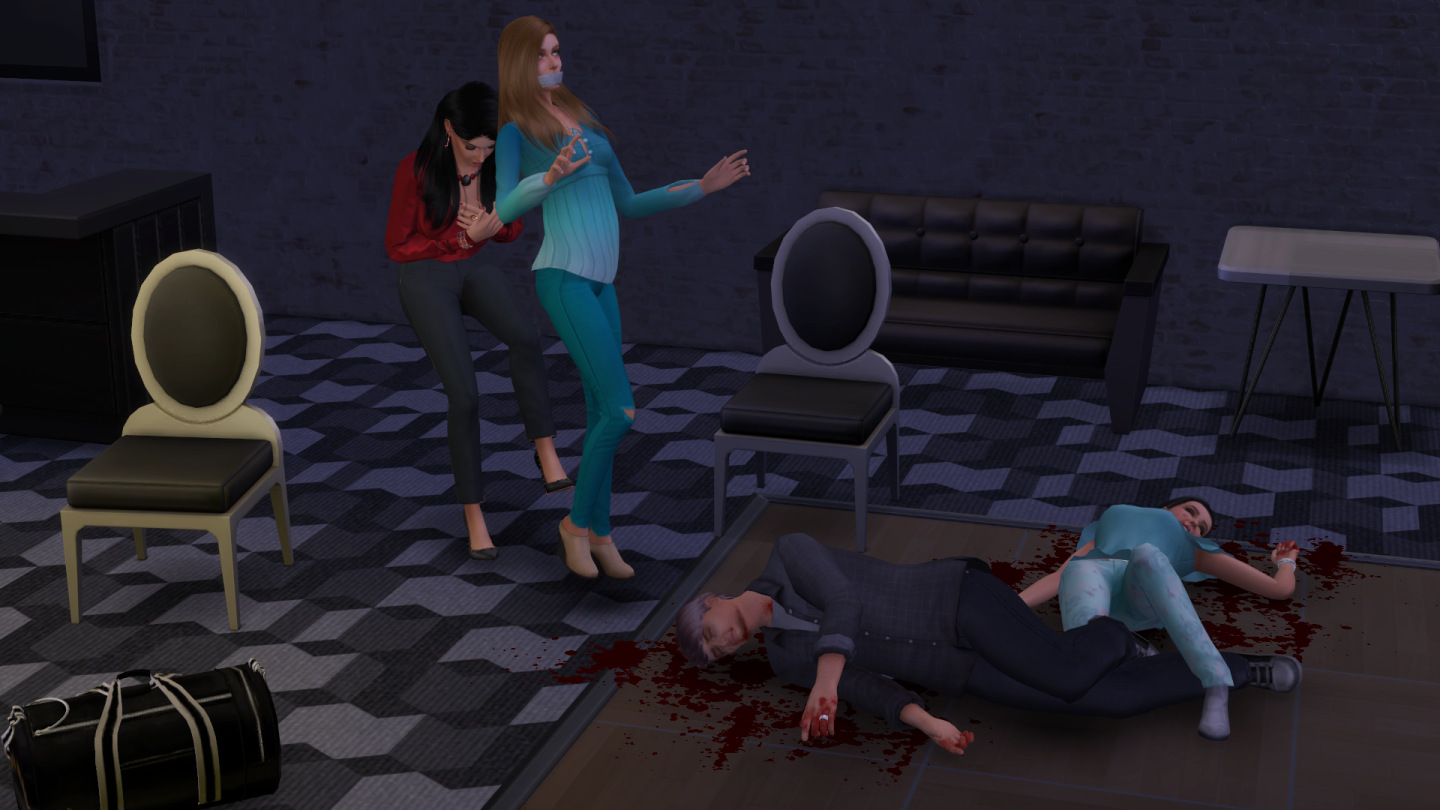 All of a sudden several shots rang out almost simultaneously.  Reagan’s mother screamed and fell backwards, bringing Reagan with her.  Reagan couldn’t breathe and everything started to go black.. 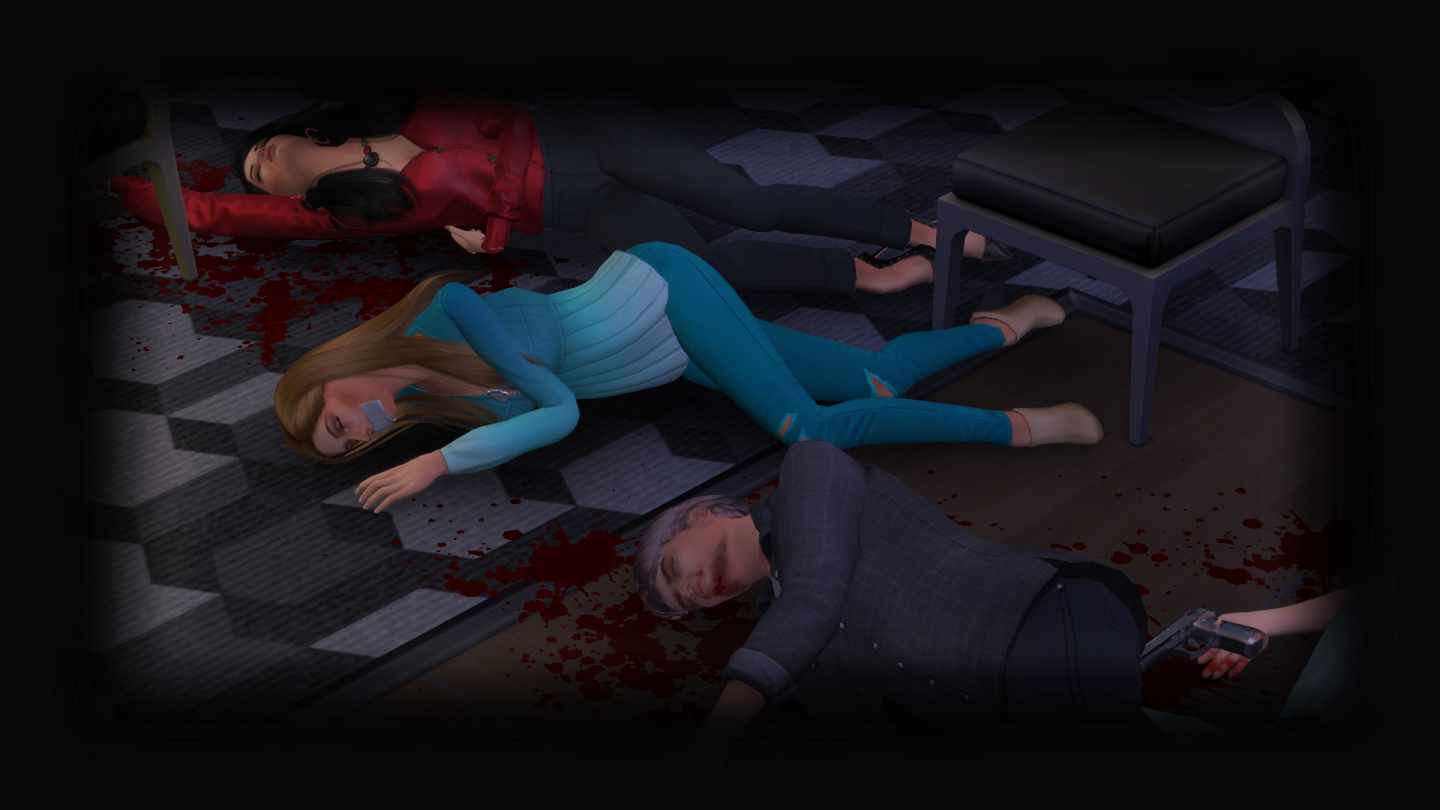 Reagan tried to find her father to say she was sorry before she died.  She finally saw him. He was so close but she couldn’t touch him.  He was eerily still and blood was everywhere.  She couldn’t keep her eyes open and let them close to ease the pain. 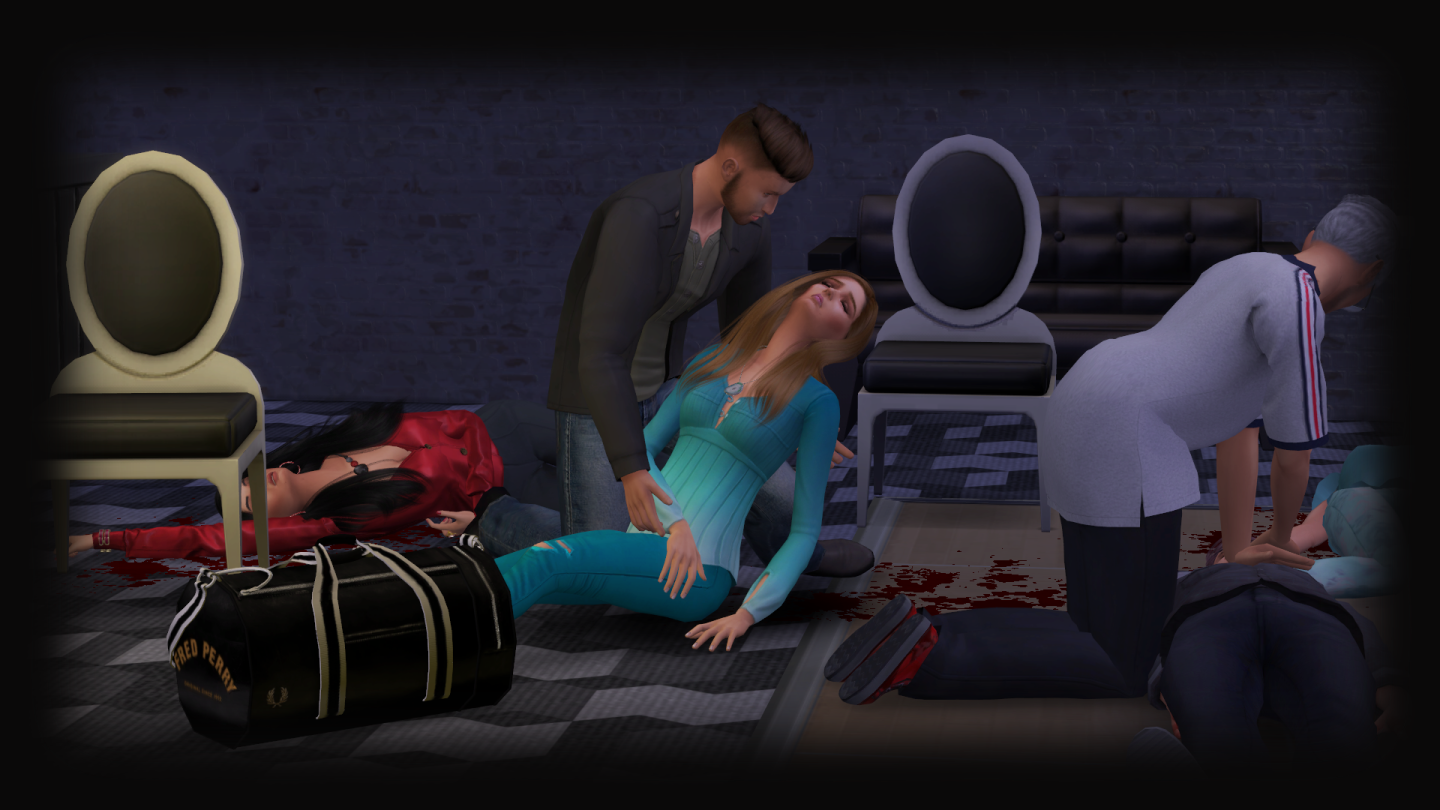 Reagan heard voices talking and yelling all around her, but couldn’t see them.  Strong arms lifted her, and pulled something from her face. It must be an Angel and she was in heaven. She gulped for air and then she heard a scream. She realized it was coming from her and she couldn’t stop it.  “Daddy! Daddy!” she cried over and over.

Those same arms lifted her from the ground and carried her away.  It must be an Angel, she thought and then, he started talking to her. “Shhh. It’s okay Reagan, it’s Archer. I’ve got you. Hold on. We need to get you to the hospital.” 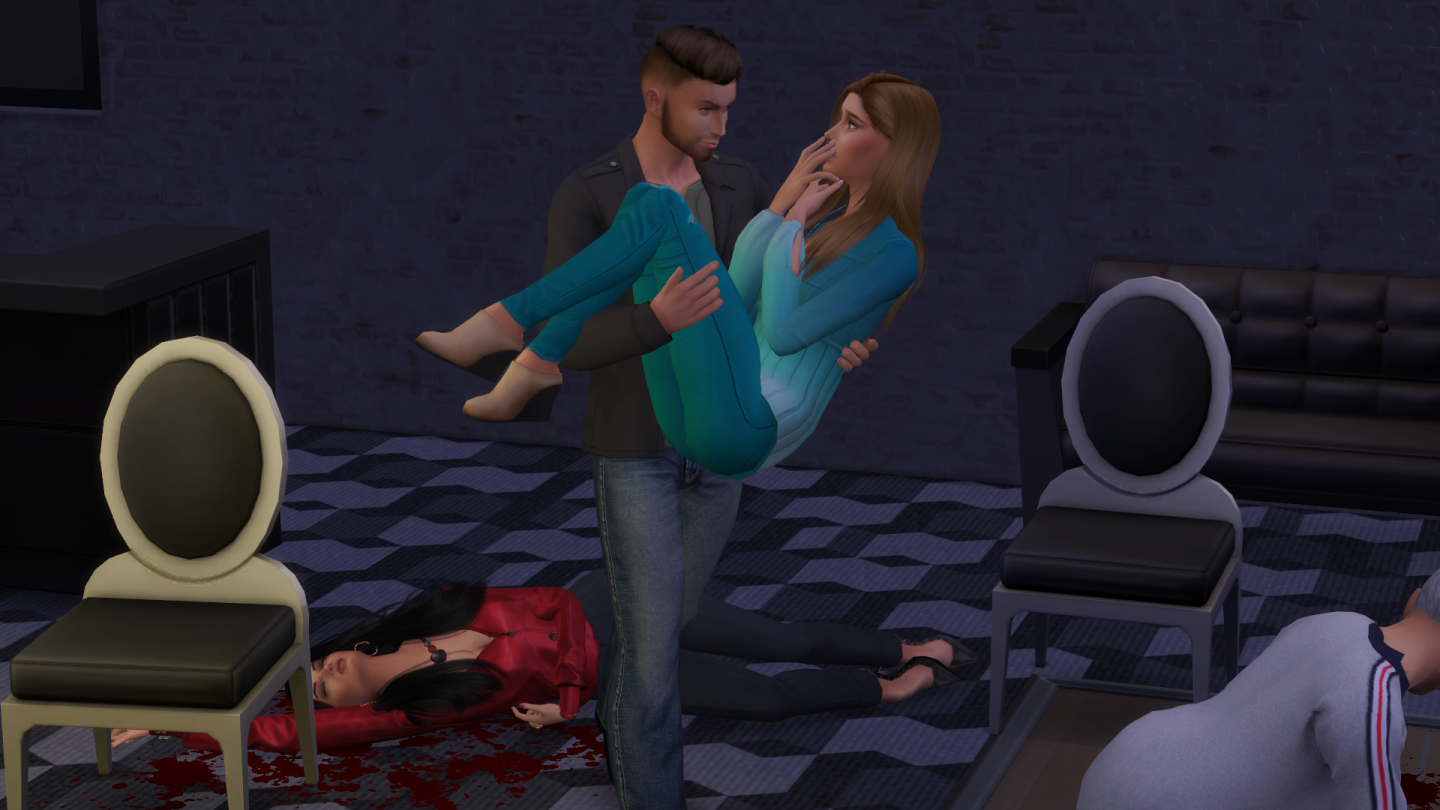 Why was Archer in heaven with her? But where was her daddy? She wanted her daddy.  Then she remembered, her daddy was dead.  “Noooo!” she cried and laid her head on Archer’s shoulder.

Saturday 9:00 PM – Outside the Clubhouse 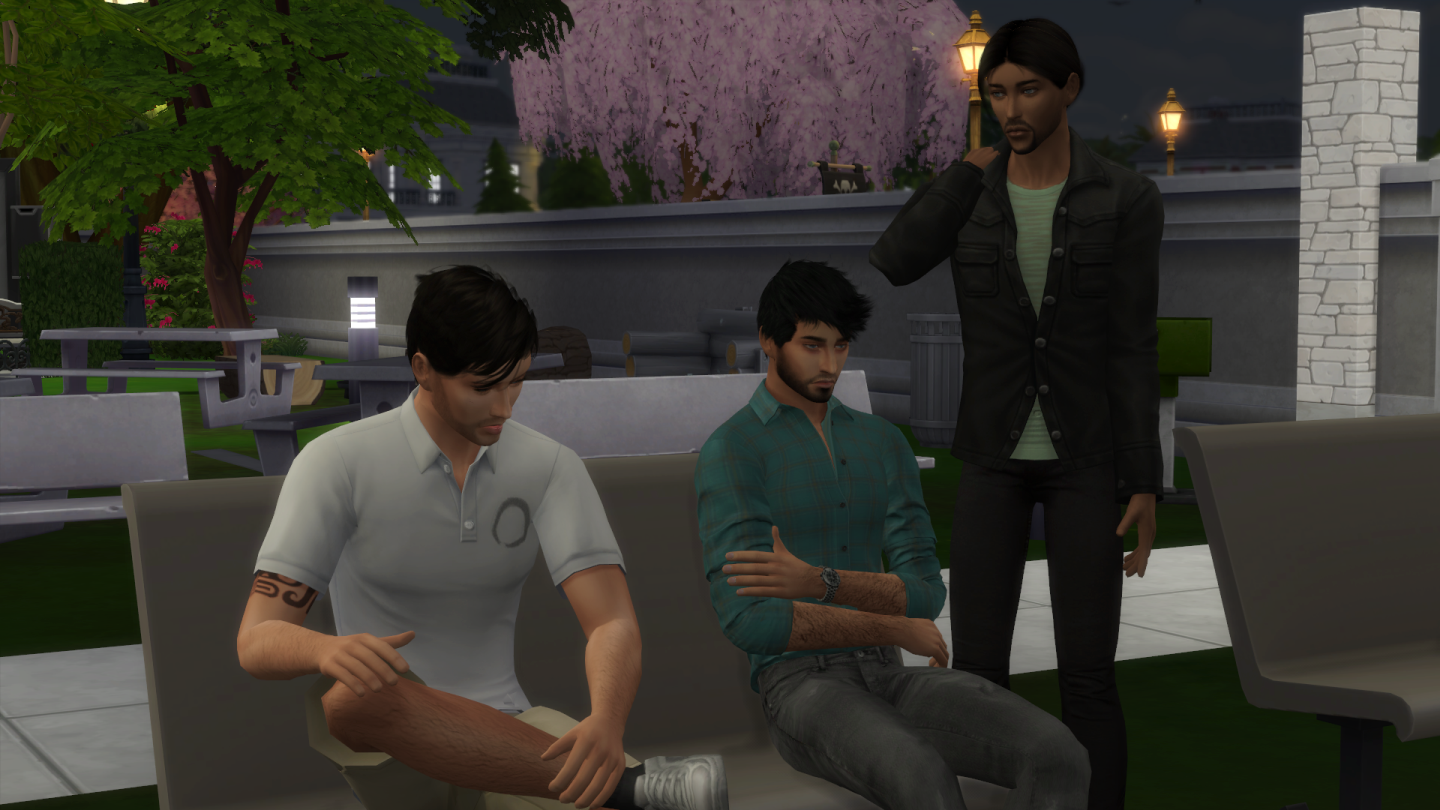 Evan was waiting outside the clubhouse with Ryan, along with one of Archer’s men,  wishing like hell he’d just told Reagan everything instead of going to see her insane mother. He just needed one more week, which he’d hoped to negotiate.  Then, he remembered what Archer said, life or death and a chill went through him. What was taking so long?

When Evan heard the gunshots he jumped up and started running towards the clubhouse. All he could think of was Reagan and that he’d killed her with his inaction. Ryan was close behind him.  Archer’s man stopped them from going inside. Almost immediately they heard sirens. 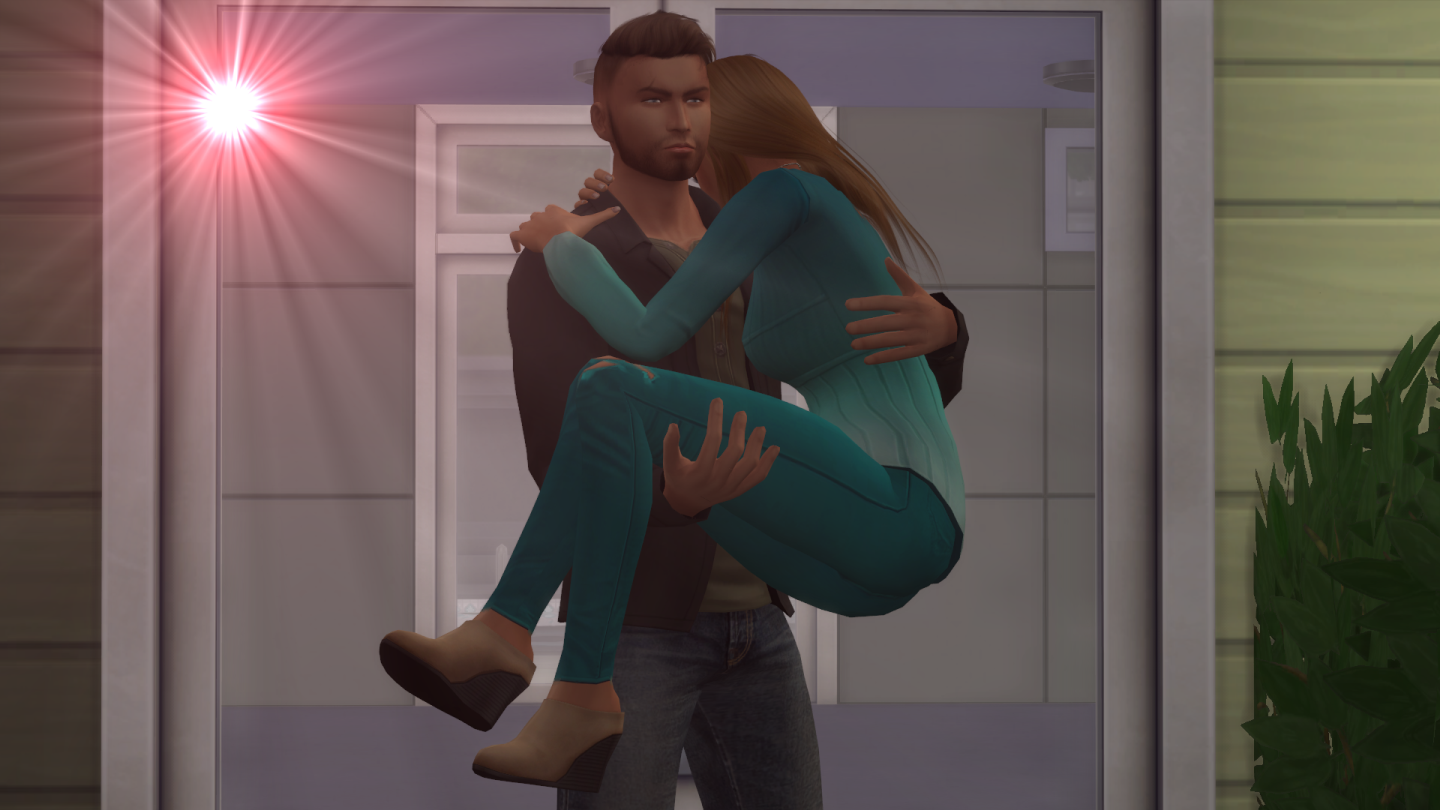 The next thing he saw was Archer carrying Reagan outside. “She’s in shock,” he said, “but she’s okay.” 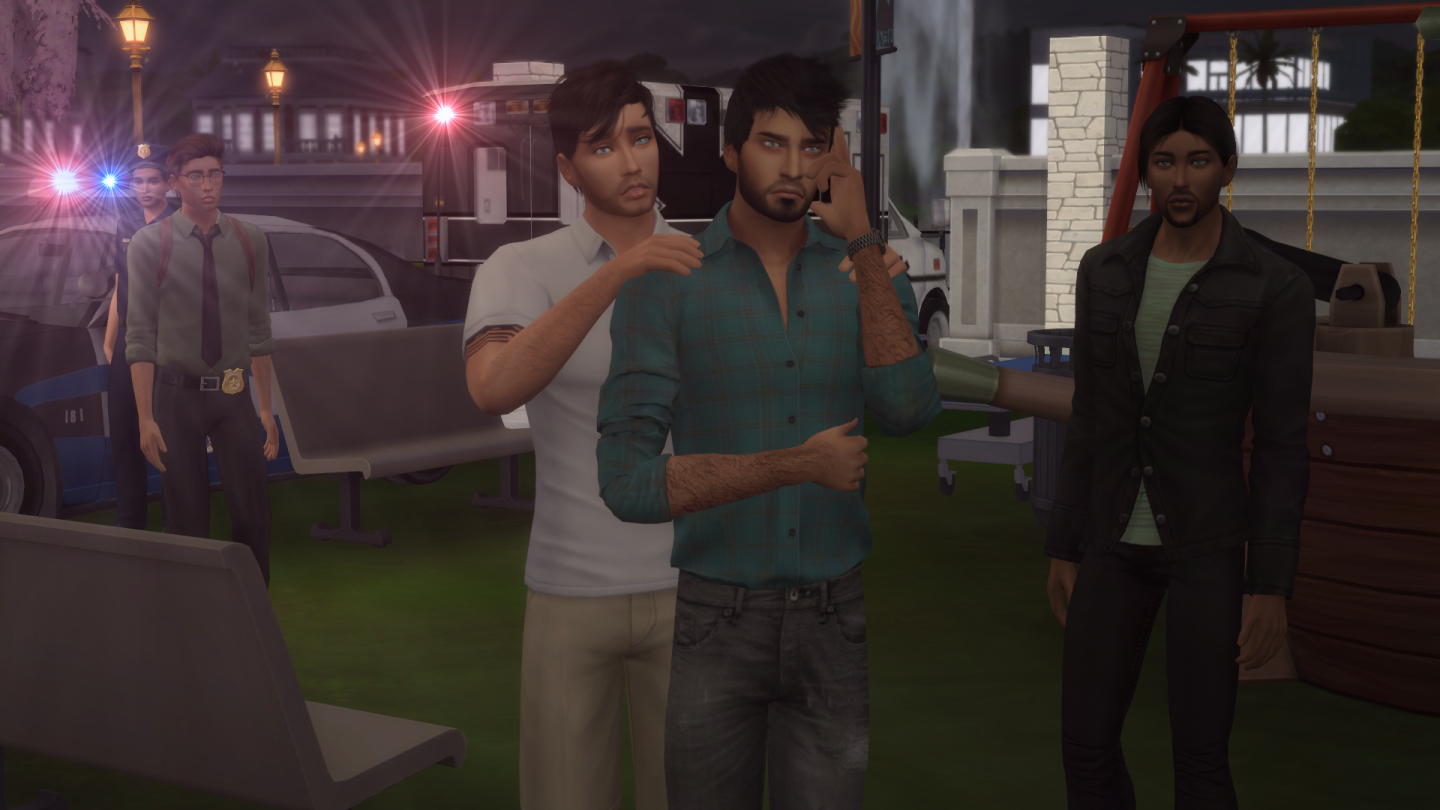 Evan wanted to take her from Archer’s arms and comfort her, but Ryan held him back. “He’s got her, Evan,” he said, “let him deal with it. He knows what he’s doing.”  Evan knew he was right and acquiesced even though he hated it.

“Oh god, Dad….” said Ryan, “Where the fuck is he?” Ryan started towards the clubhouse and Archer’s man once again stopped him.

“Stand back and give them room,” said the man, “they’re coming out.” Paramedics had gone inside while Archer had been talking to them. 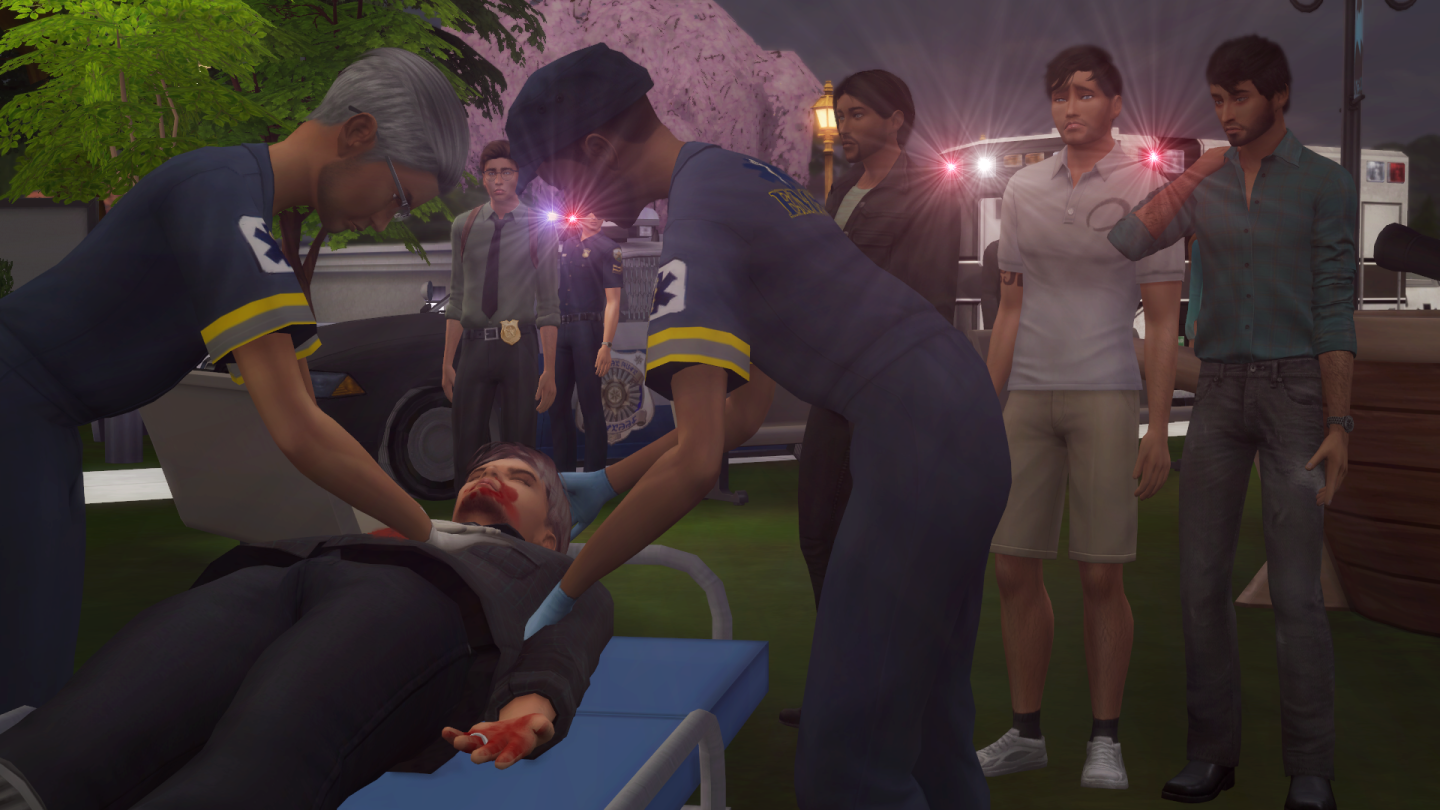 Less than a minute later, Ryan’s and Evan’s fears were answered when they watched as Ryan’s father was carried out on a stretcher covered in blood. One of the paramedics was performing CPR as they rushed him towards the waiting ambulance.  “Oh my god!”  cried out Ryan.

Evan had never in his life felt so out of control and helpless as he did watching his friend. Ryan grabbed one of Archer’s men.  “Where’s Dannie?” he choked out. Of course, thought Evan, she’ll want to know, to be there for her husband. He couldn’t imagine how hard it must be for her, not knowing. 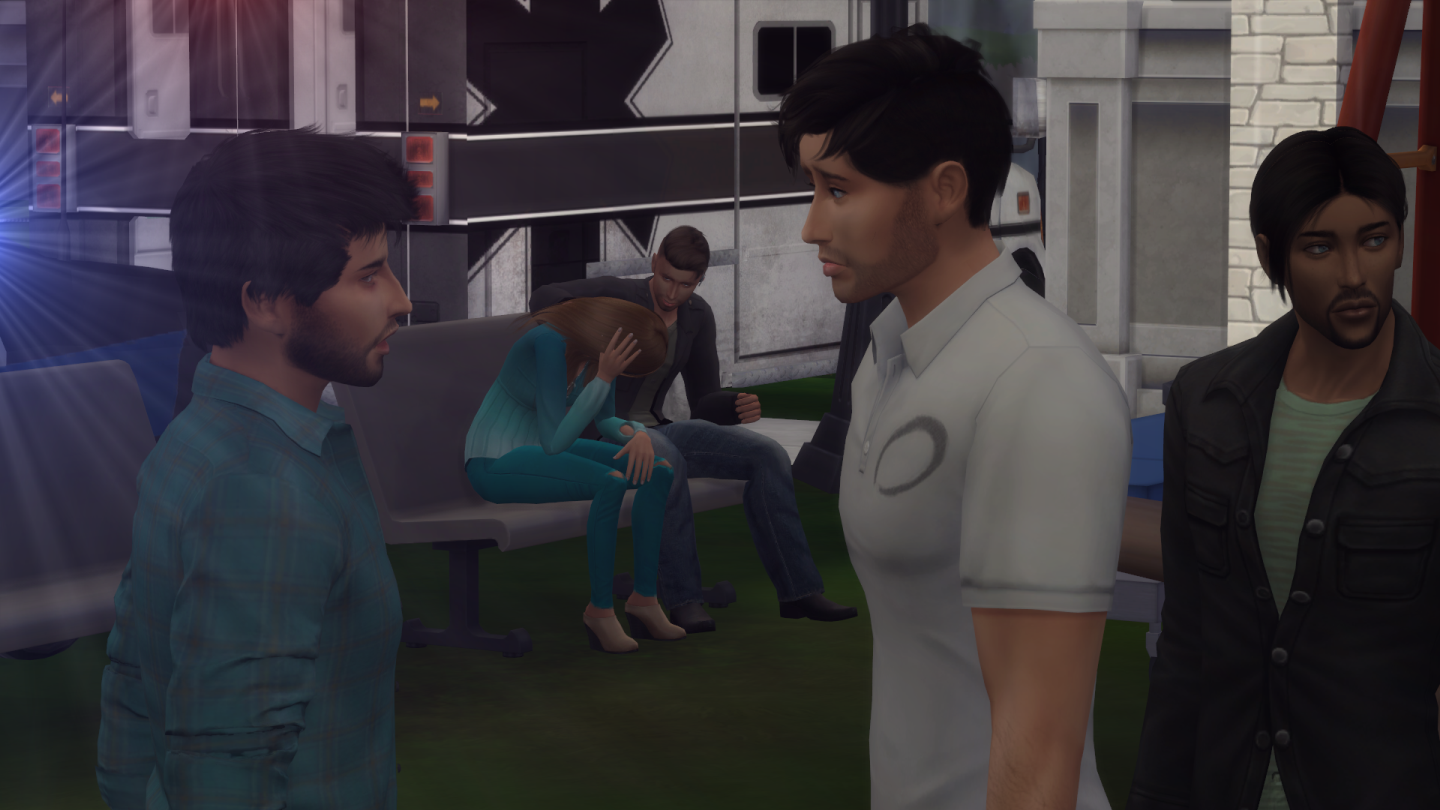 Ryan looked over where Archer was still sitting with Reagan. Evan could see the struggle within his friend.  “Go with your dad,” he said, “I’ll go tell Dannie and meet you at the hospital.”

Ryan didn’t wait. He ran towards the ambulance where they were getting ready to load his father. 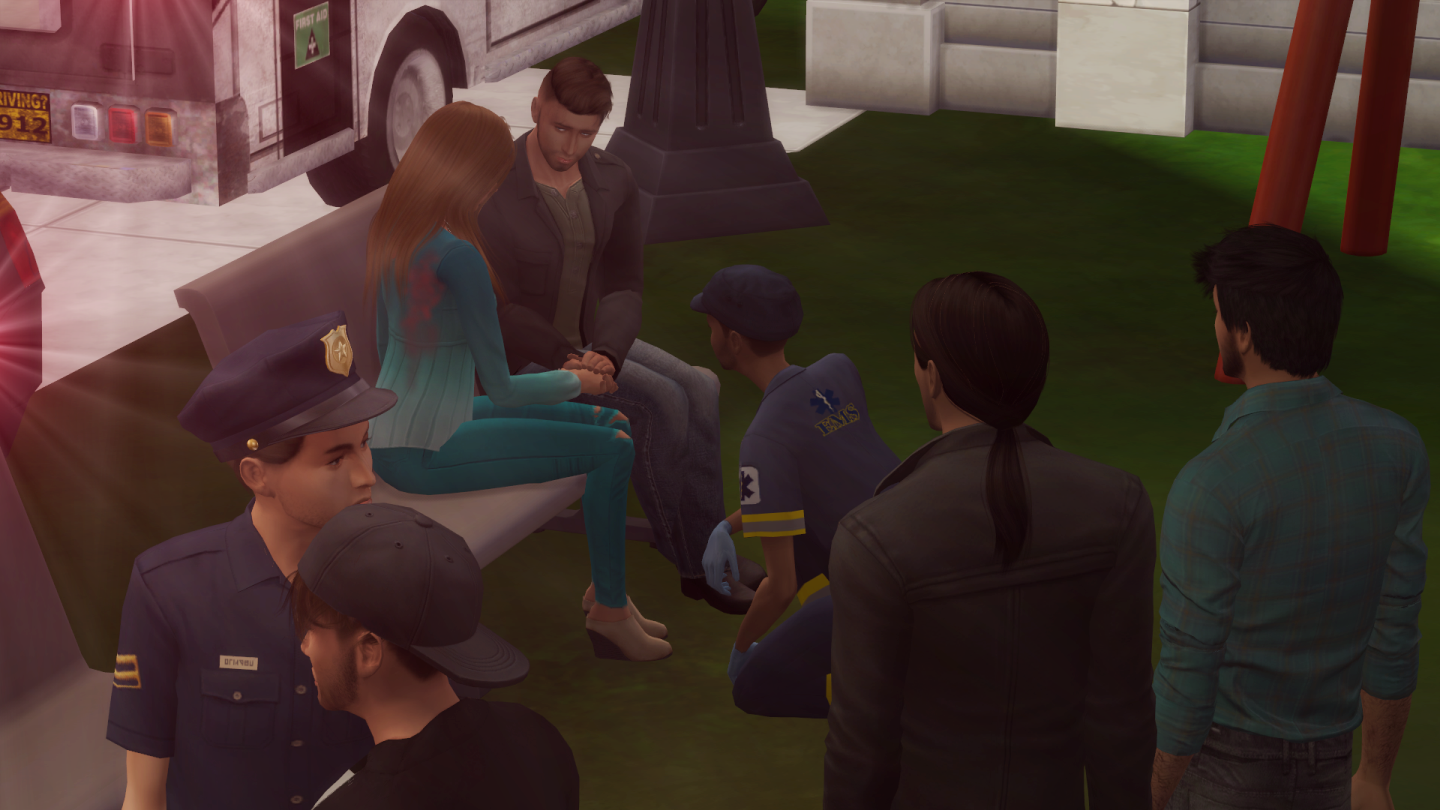 Evan took one last longing look at Reagan before he left, a huge knot forming in his stomach. Archer hadn’t left her side and a paramedic was now with them.  Archer was holding her hand soothing her, mumbling something unintelligible. Something he should have been doing.

Evan loved Reagan more than he ever thought possible.  She didn’t deserve any of what she’d been put through.  When he finally told her he loved her, she had quickly said she loved him back.  That was only this morning, right before he broke her apart.  It seemed like forever ago.  He wouldn’t give up on them. He couldn’t. Somehow, he’d make it up to her, even if he had to spend the rest of life doing so. 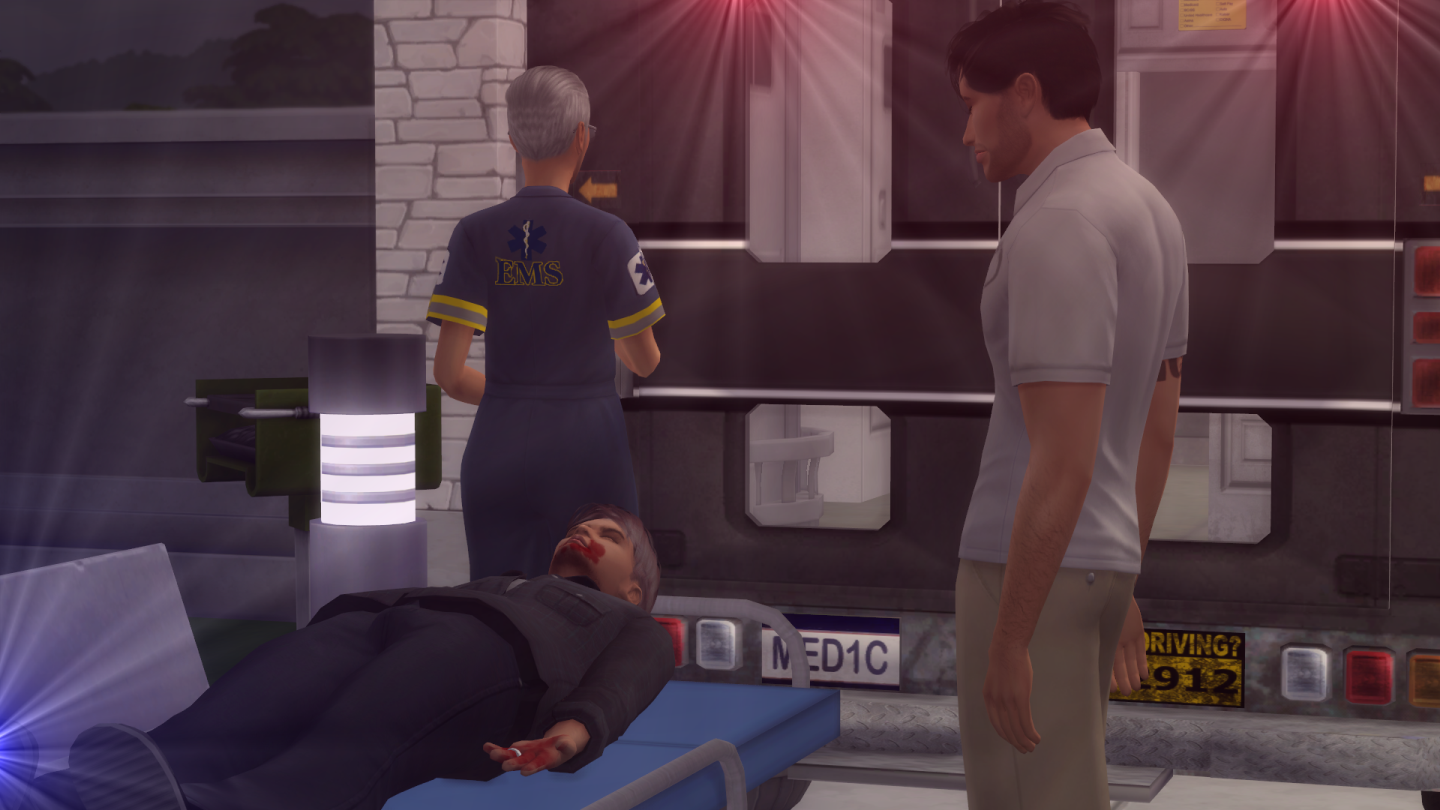 “Let’s go,” said the man waiting on him.  Even turned and followed him to his car to deliver the solemn news to the rest of her family.  He looked at Ryan and his father as they passed by the ambulance and said a silent prayer for Cole to be spared.  He knew Reagan would carry the guilt of his death a lifetime, even though the only one to blame would be Avery and Gun Lady.

Before they could leave the scene, two more stretchers were wheeled out of the clubhouse bearing what he hoped were the dead bodies of Avery and Gun Lady.  Avery didn’t deserve to live. Not even in prison. He never in his life hated someone so viscerally. And not just for what she’d done to him, but for what she’d done to the woman he loved and her entire family. They were good people. She was pure evil. 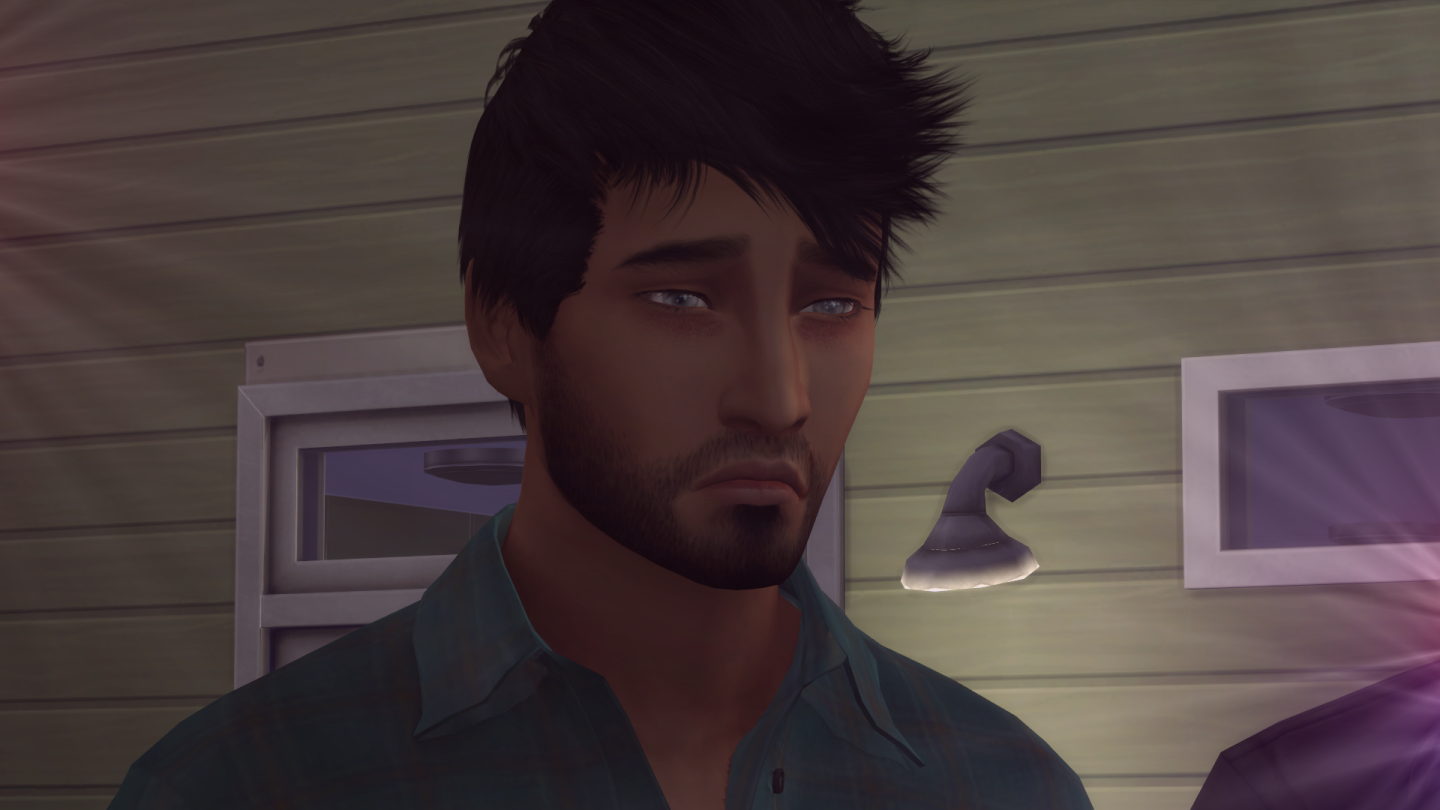