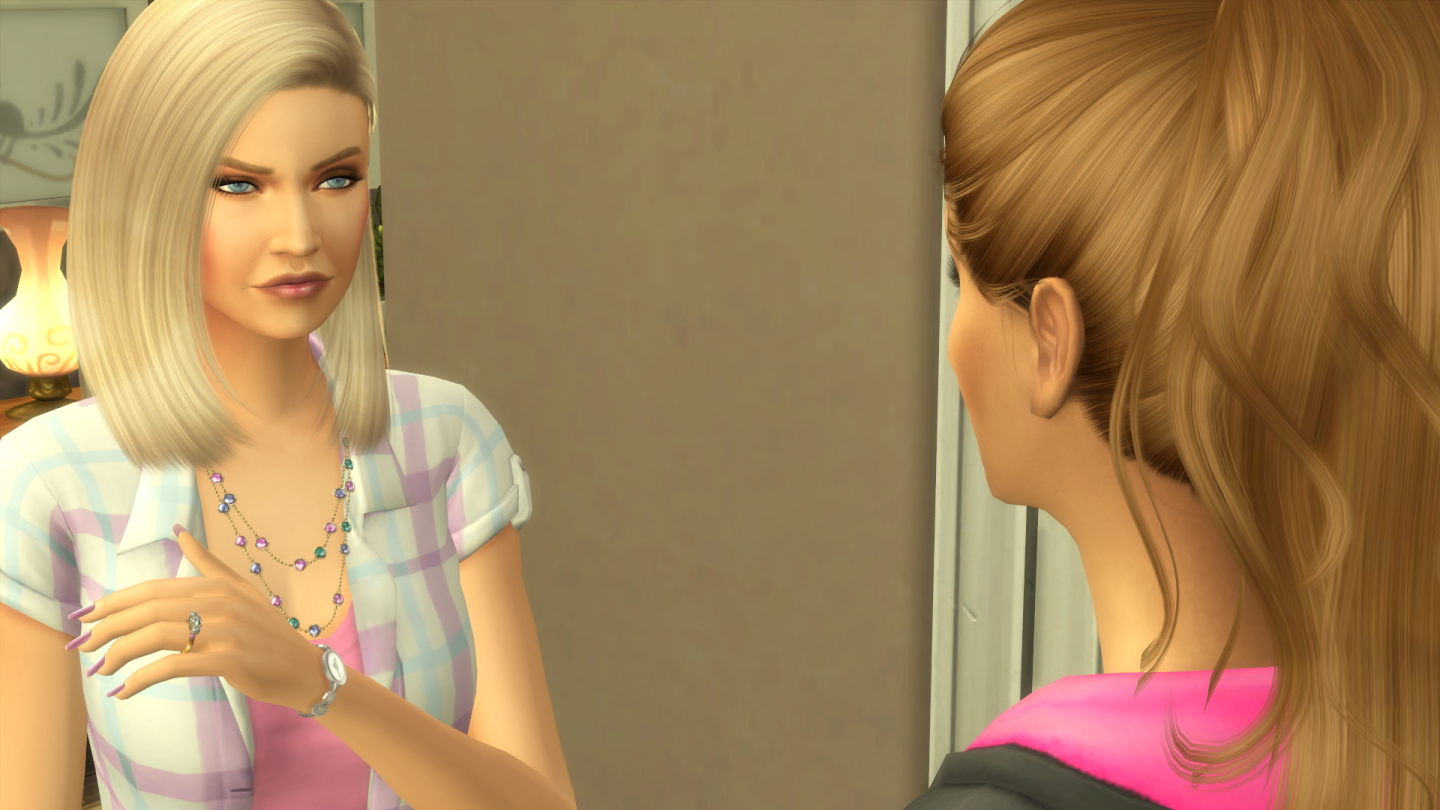 Two days later, Reagan’s father went home. Reagan gave him a day to get settled before she decided to bring up moving. If he said no, he needed her here, she’d stay in a heartbeat. When she arrived at their home, Dannie directed her to the TV room with barely a word. 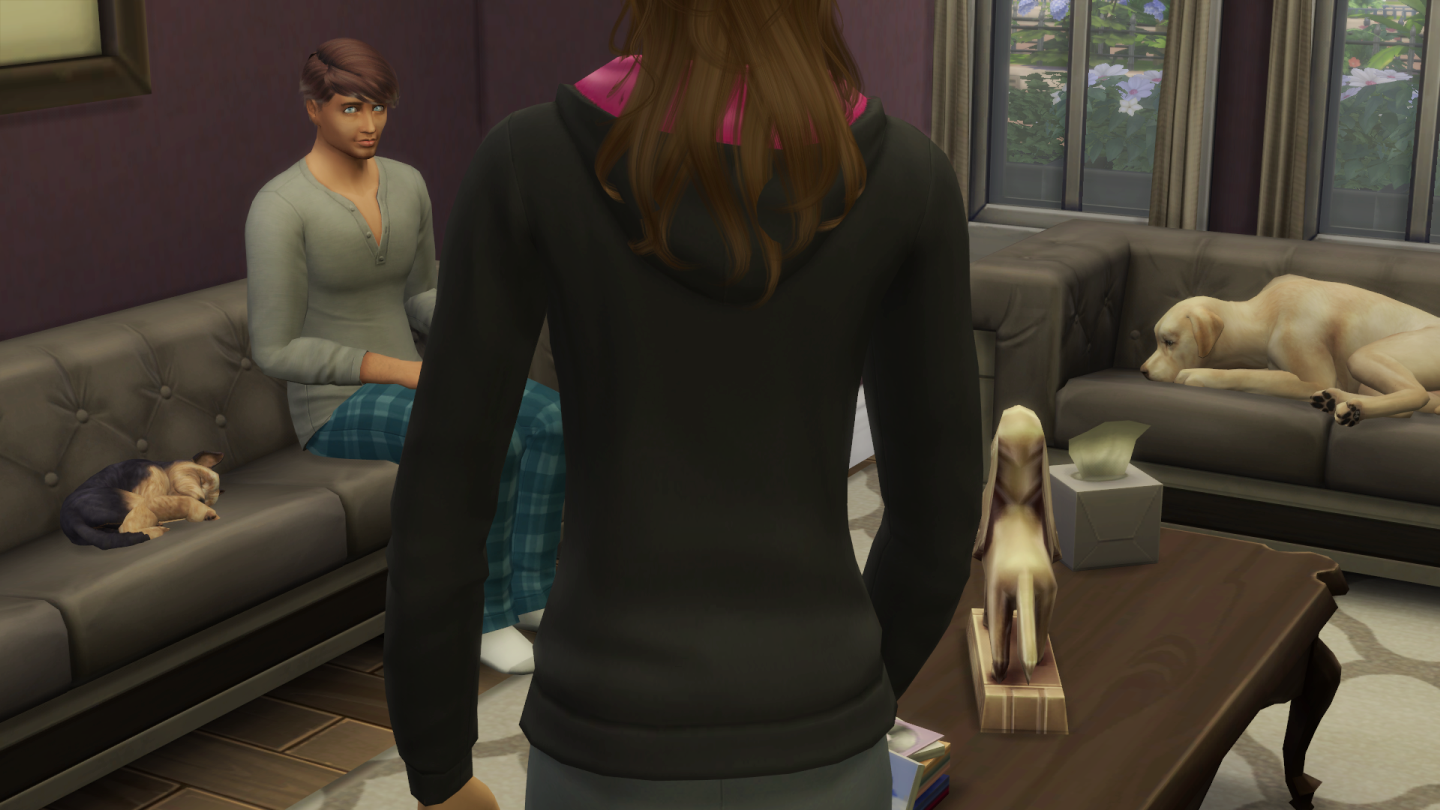 Her father was sitting up, watching TV, both of his dogs by his side, when she walked in. His eyes lit up when he saw her. She didn’t deserve his love, but she desperately needed it, and that little expression both lifted her spirits and put an arrow through her heart. “Hi Daddy.  Dannie said you were in here. Am I interrupting?” 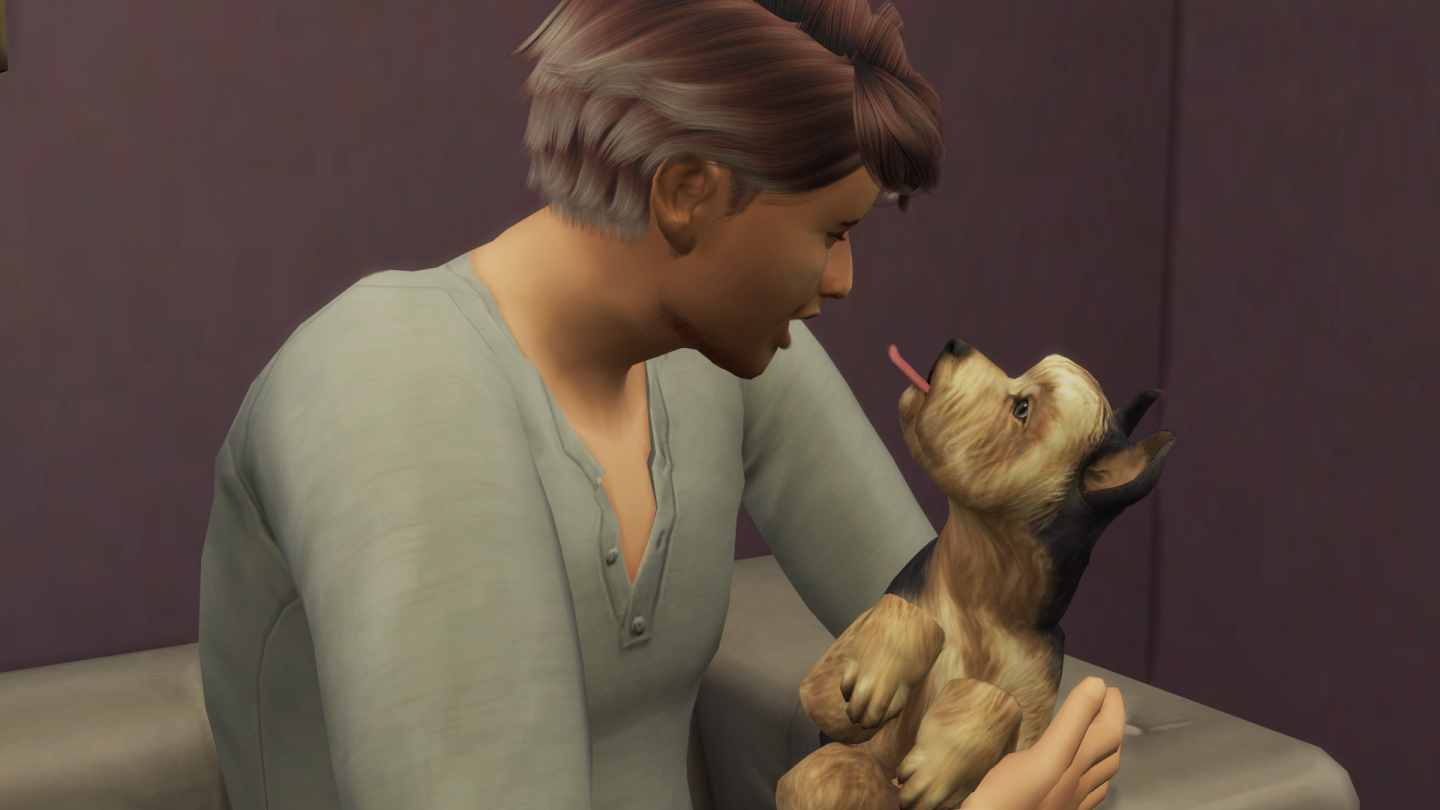 “Never. This was boring anyway,” he said and turned off the TV smiling. He picked up Buster, the little dog sleeping next to him.  “Come here Buster, let’s make room for Reagan,” he said, as the dog affectionately lapped at his face, then he patted the now empty seat next to him and looked up at her.  “Come sit down and tell me what’s on your mind.” 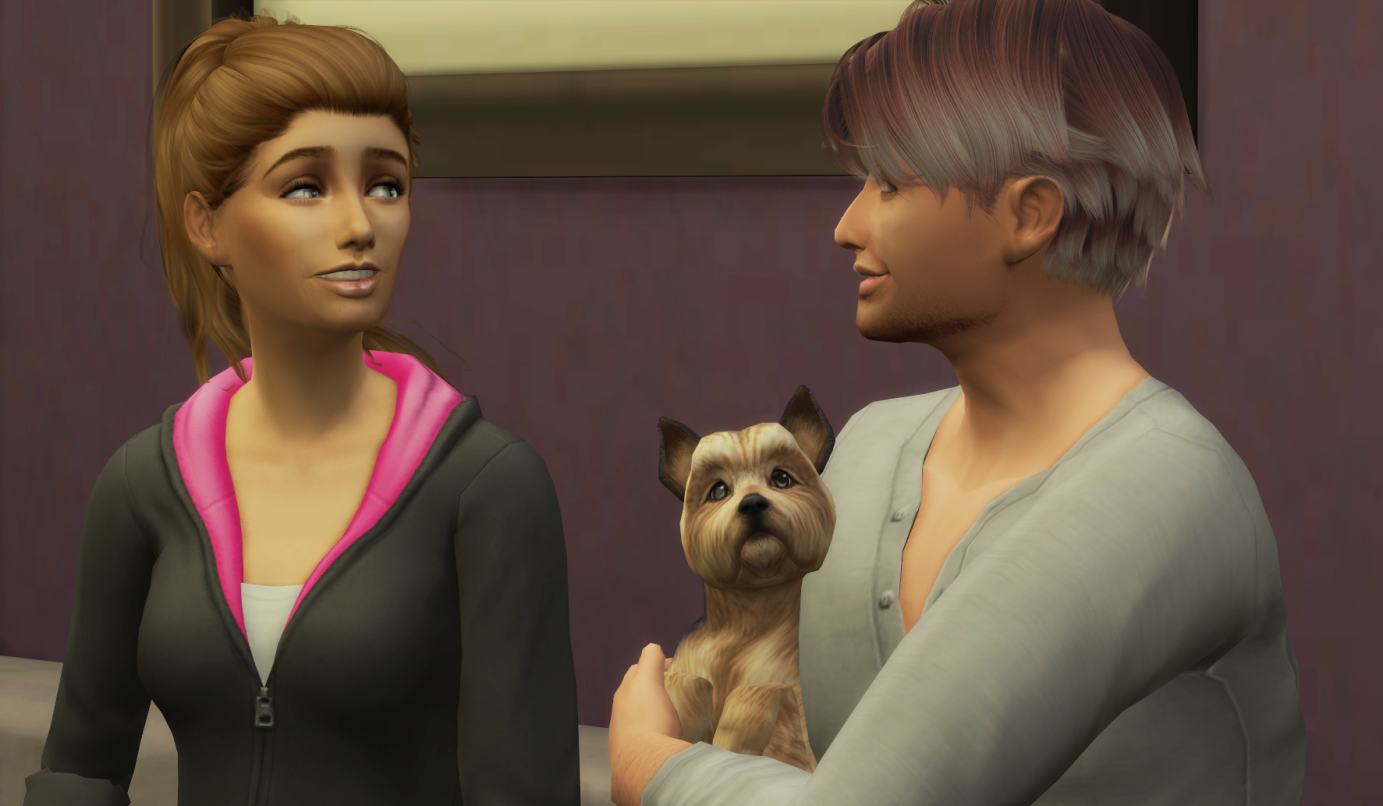 Was she that transparent? “Daddy, first, I want you to know how sorry I am. I was foolish and blind when it came to Mother. I only saw what I wanted to see and it nearly cost you …” She stopped and inhaled sharply, unable to say the words. 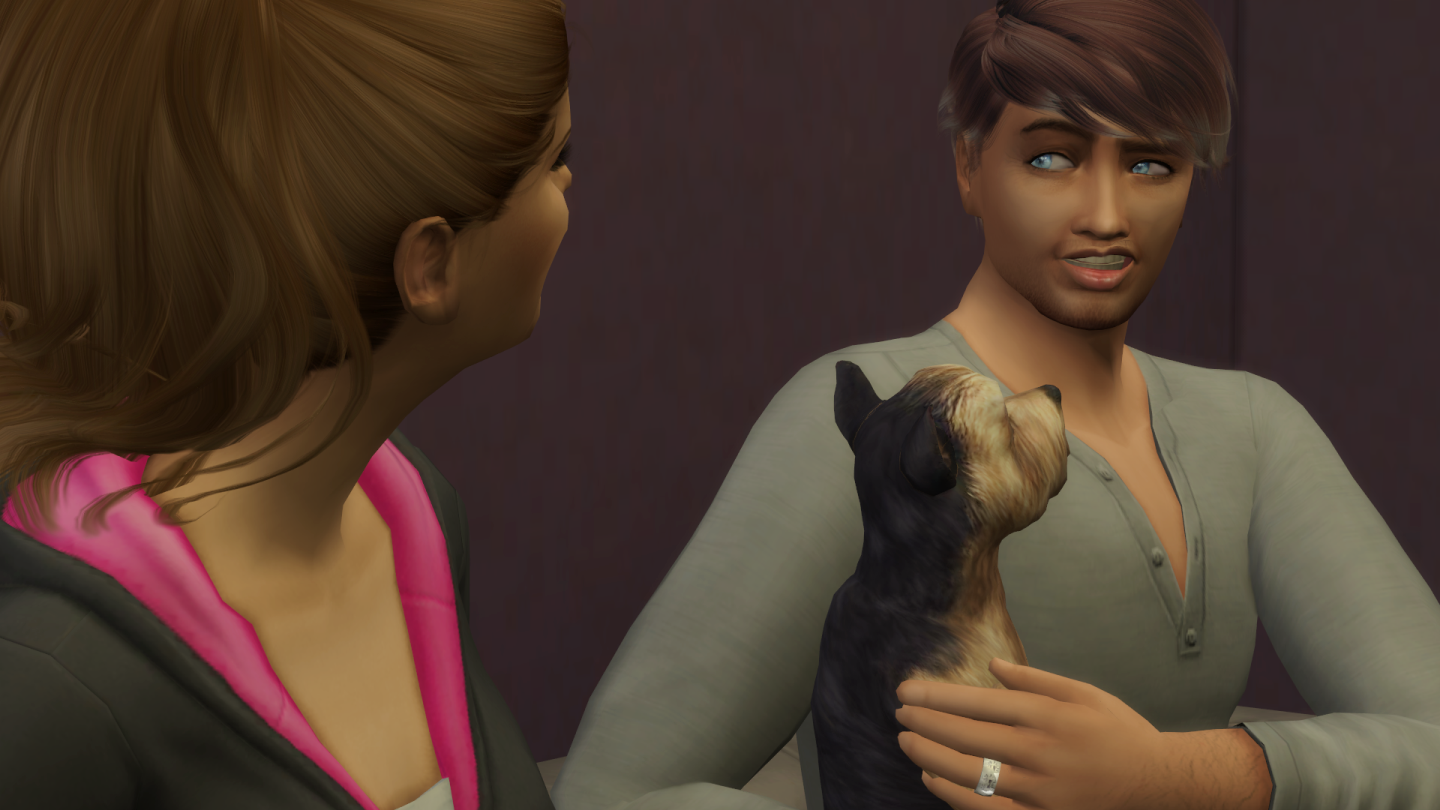 “Baby stop that,” scolded her father. “There’s absolutely nothing to forgive. We were all fooled by her at some point. And frankly, I wasn’t exactly the ‘World’s Best Dad’ when you and Ryan became teens. I did some unforgivable things to protect you, but should’ve been honest instead. Your mother was a sociopath and I couldn’t bear seeing the pain her absence caused you two. I assure you, my actions all came from a place of deep love …” he paused and chuckled, “I guess what they say about the road to hell is true, but it’s all over now. We got lucky.  I’m fine and I’ll be back to work in a month.  And while your mother’s death is sad, it’s on her, not you, or me.” 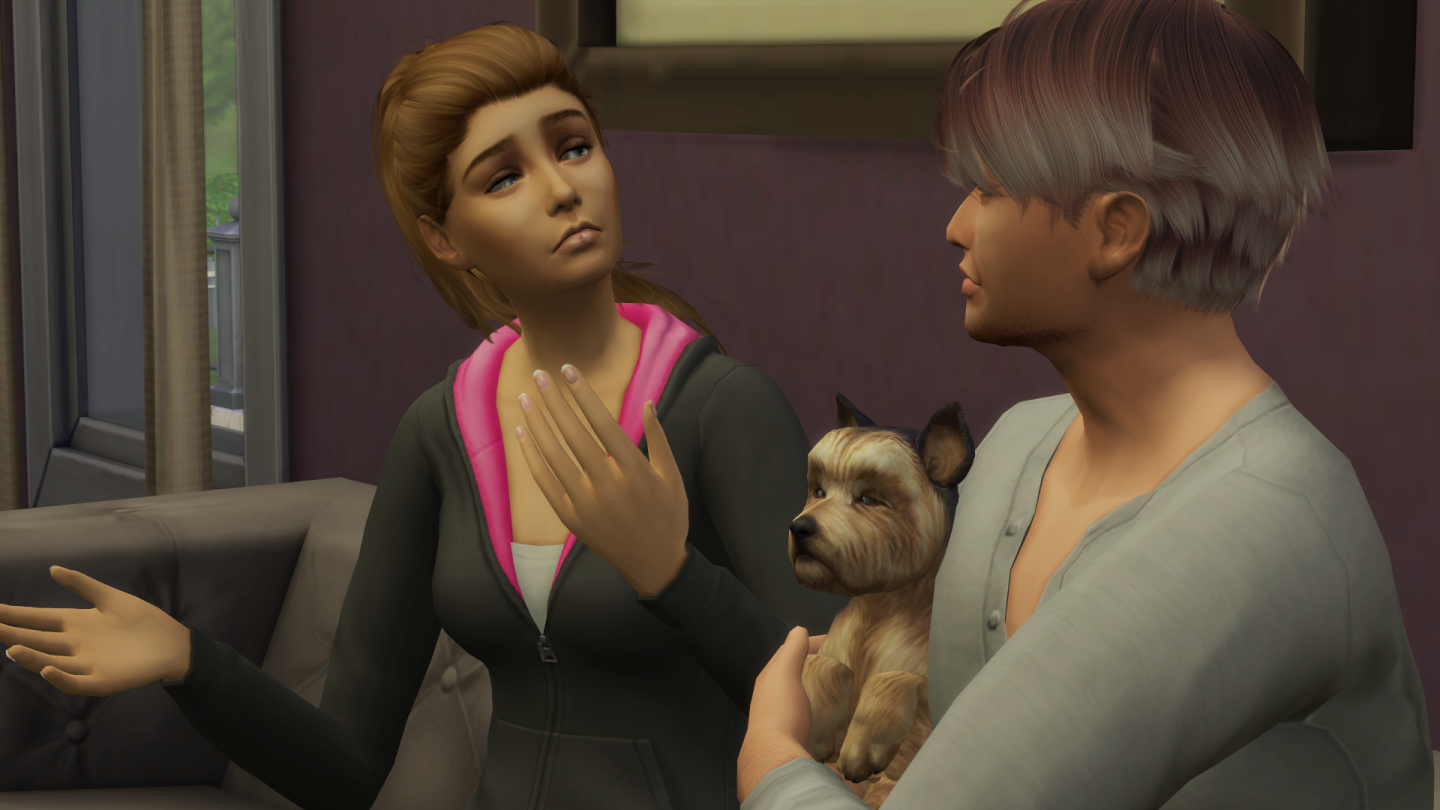 “I feel so guilty about everything,” said Reagan.  He couldn’t possibly dismiss it that easily.  “You were only trying to protect me from her.  I thought you were jealous and selfish.  I understand you weren’t, but I didn’t then. I was terrible. I’m sorry.”

“Honey, you were a hormonal teenager whose identity was torn apart. If I hadn’t handled it so poorly, maybe you wouldn’t have run to her, or even Archer. So let’s put it in the past and just try to learn from it.”

“Daddy, that’s just it. Everything here, it’s too hard. I can’t escape it, even my house, my work, Evan …”  She almost said Dannie, but stopped herself.  “Archer asked me to come to San Myshuno with him … for a month. I need to get away for a little while, but I don’t want to leave you. I owe you so much. I should be helping care for you.” 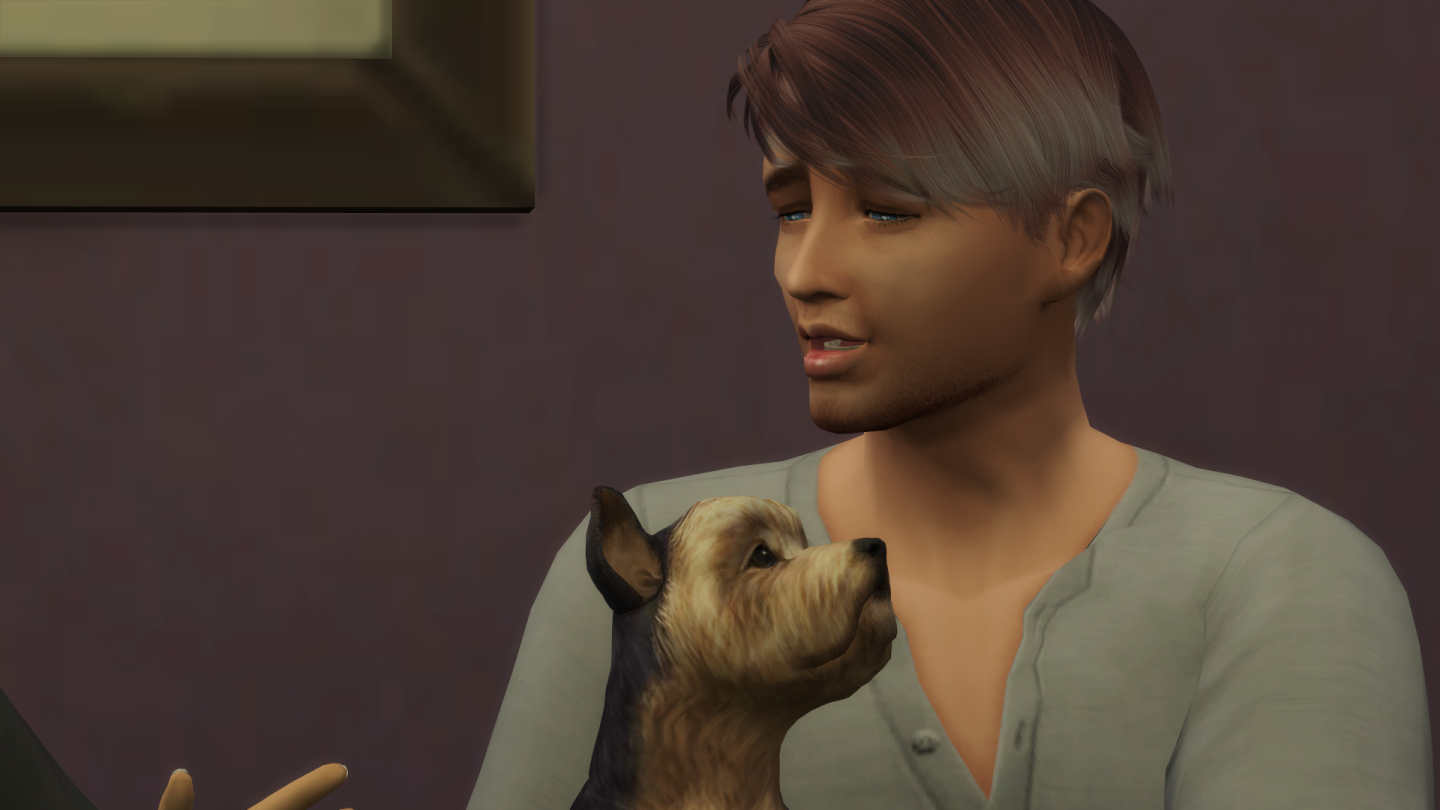 “Dannie treats me like an invalid.  I assure you, I’m being well taken care of.”  He paused for a minute before continuing, carefully choosing his words.  “But, sweetheart, while I can understand your need to run away from reality for awhile, please, be careful that you aren’t going with Archer for the wrong reasons.”

“You still don’t trust him, do you?” asked Reagan, her tone more accusatory than she intended.

“I owe him your life, and mine too. He’s turned out to be a hard working young man … however, his profession can be dangerous … so I worry about that.  Plus, I think you have unresolved issues with Evan. You’re in love with him and I know he loves you too. Very much, in spite of what happened, what Avery did to him. We all make mistakes sweetheart. You should give him a chance to explain.” 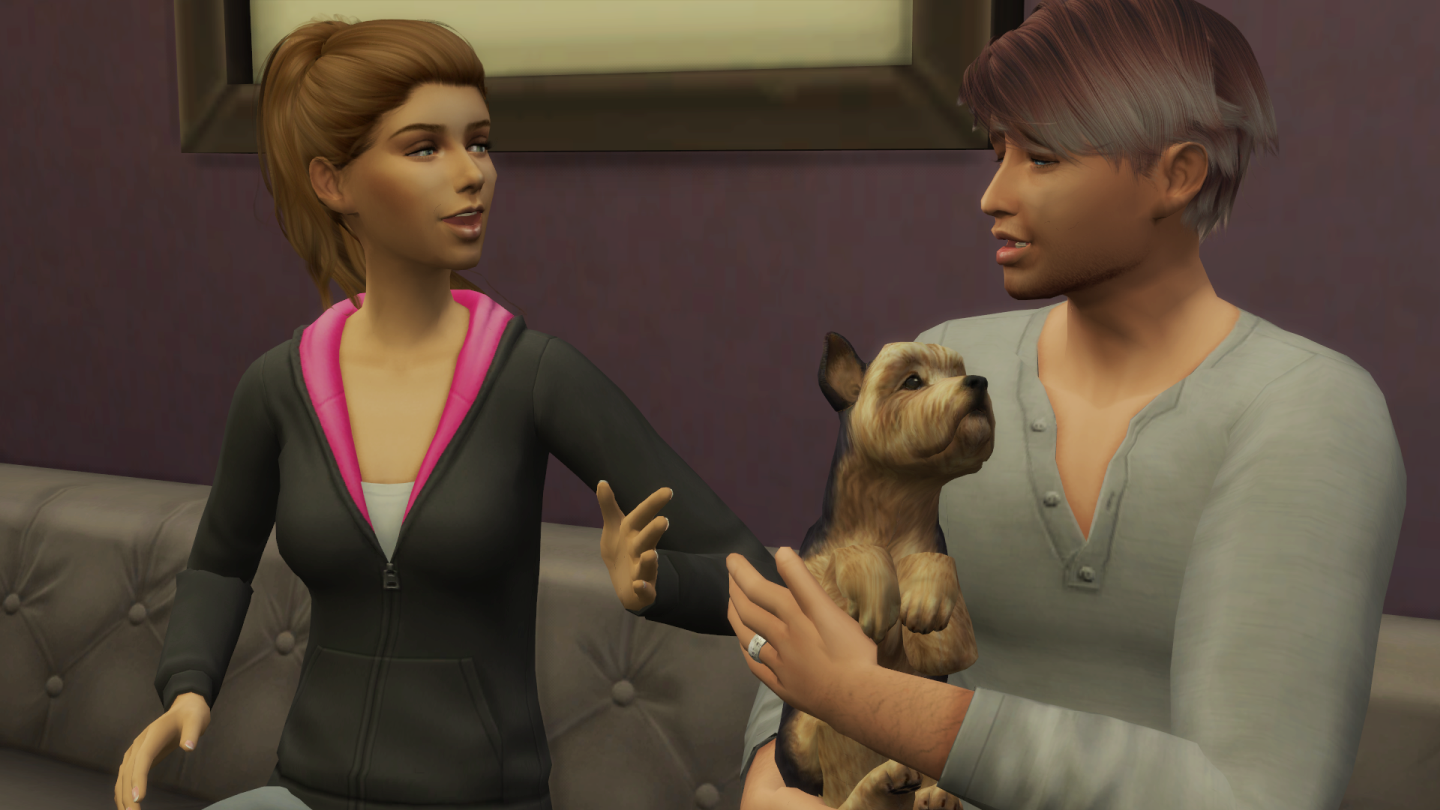 “Daddy, Archer has been great. He helped me so much after the shooting. You’re right, I owe him. If he hadn’t been there … I don’t know what I would’ve done.”  A shiver went down her spine.  She might not be sitting here.

But her father’s words bothered her.  Was she really running away from reality? She just needed to go where it was safe and think, and Archer was safe. He wasn’t dangerous – at all.  He worked in an office.  And Evan. She did love Evan. When she saw him, she knew she still had deep feelings for him. But, right now, she couldn’t think about him and his lies. It hurt too much and she needed time away from the hurt. 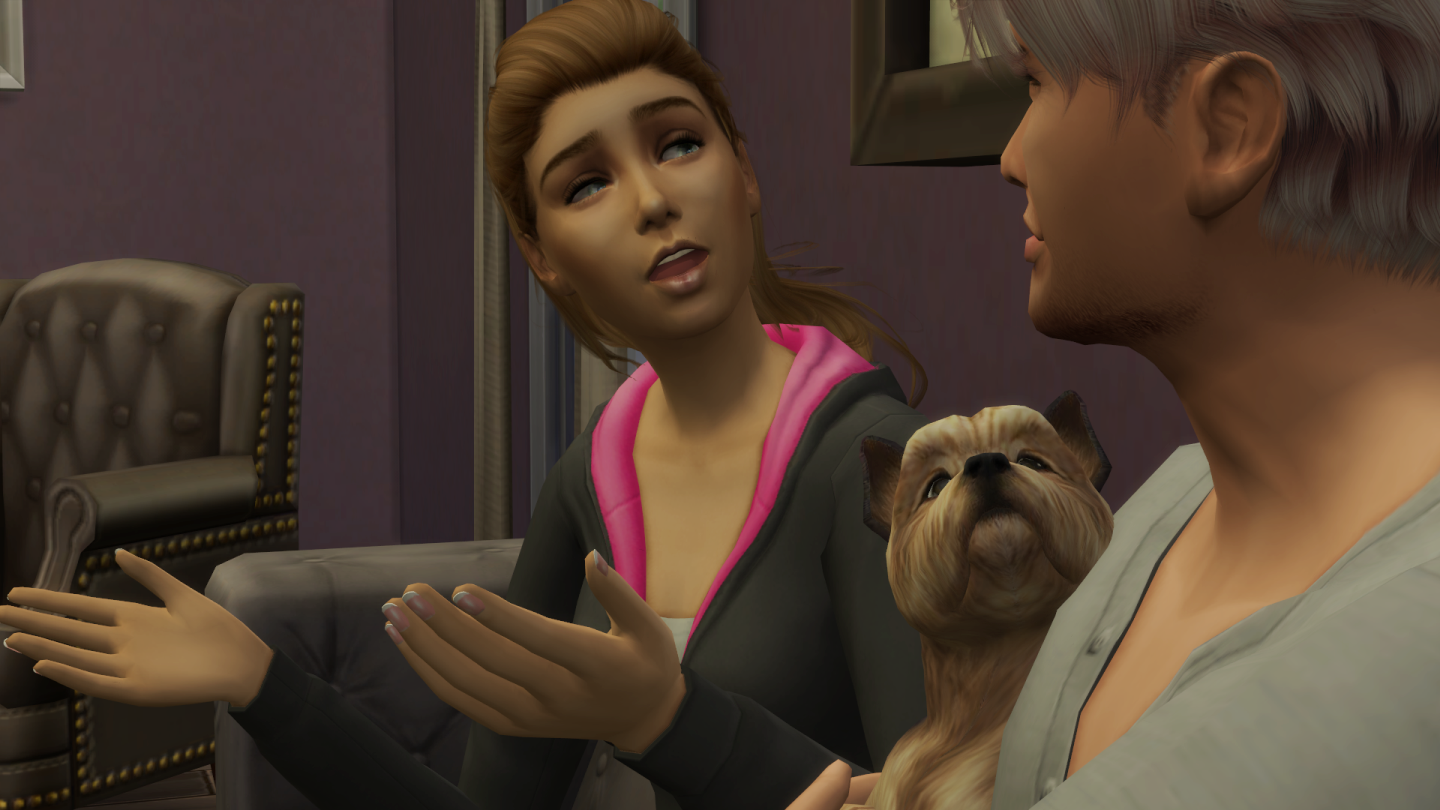 “I’m only going to be gone for a month,” she said finally, keeping her voice soft.  “I could never stay away forever. My family is here, my job too. I just need time to get my head on straight.”

“But what about Evan?” asked Cole pointedly. 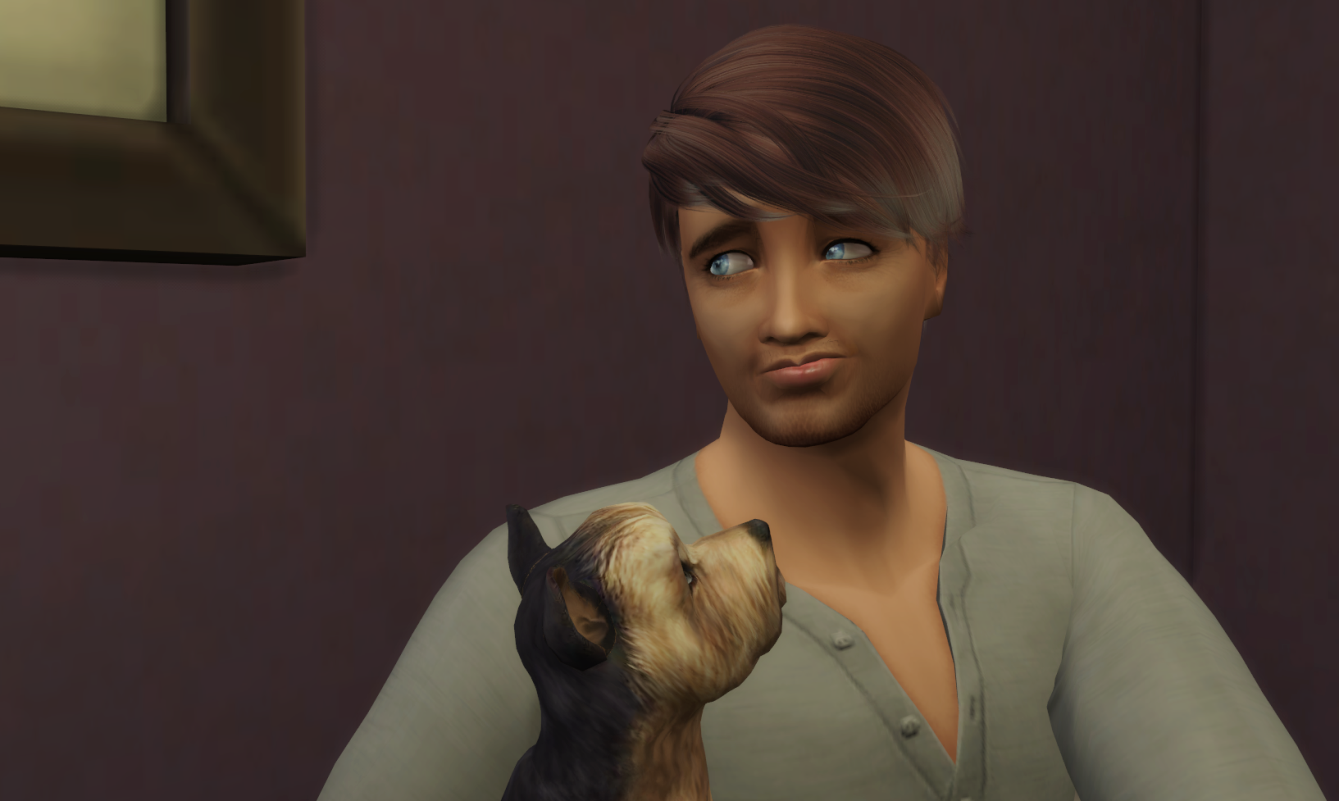 “And you can do that, away from him? Living with Archer?” asked her father, incredulous.

“I can’t stay and think.,” she explained, “And anyway, Archer and I are only friends.” 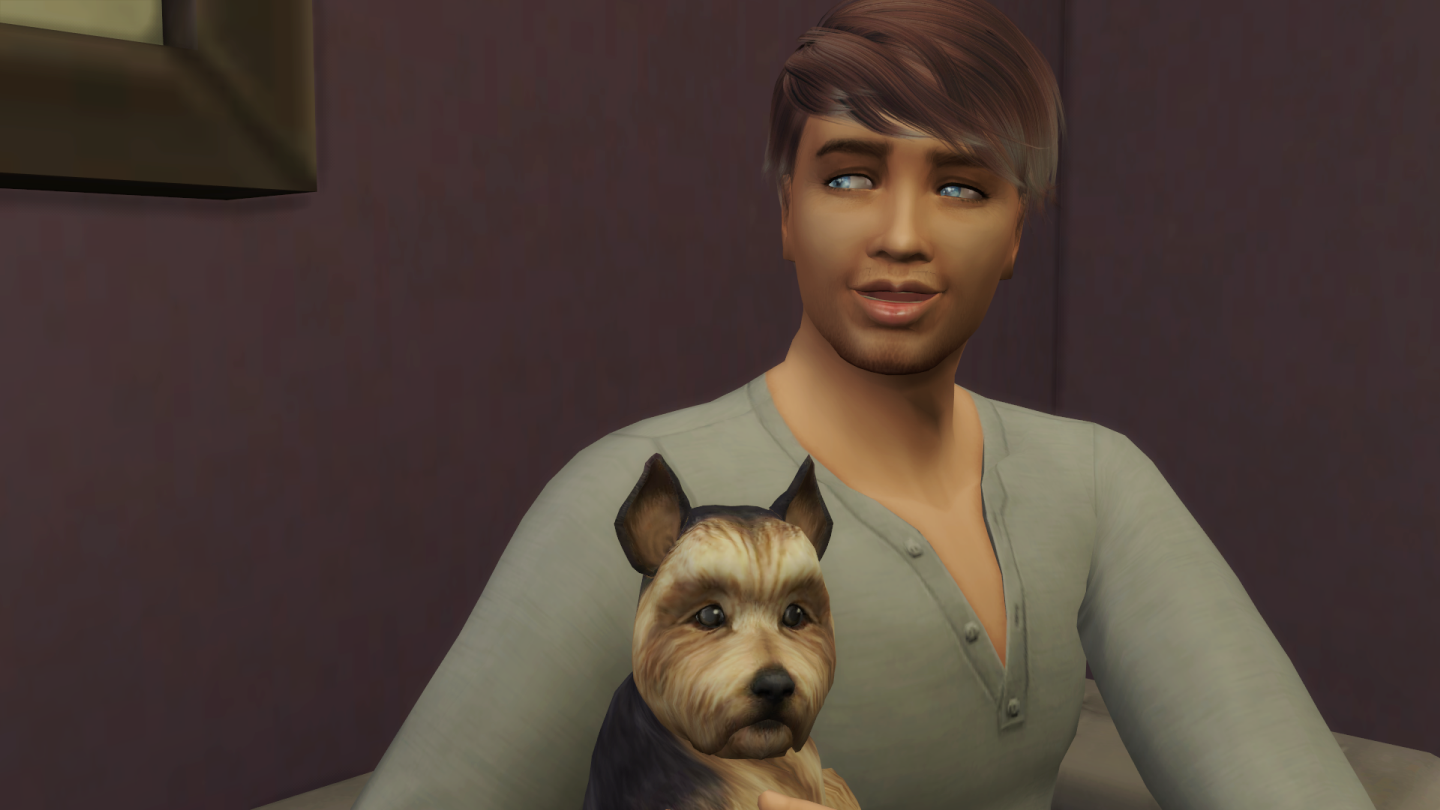 “Friends don’t look at friends the way Archer looks at you,” said Cole and blew out a breath, “but I don’t know If I’m in a position to say what you need to do. Maybe it’ll do you good to get away for a little while. But you should keep an open mind about Evan. He’s suffered a lot at the hands of Avery.” 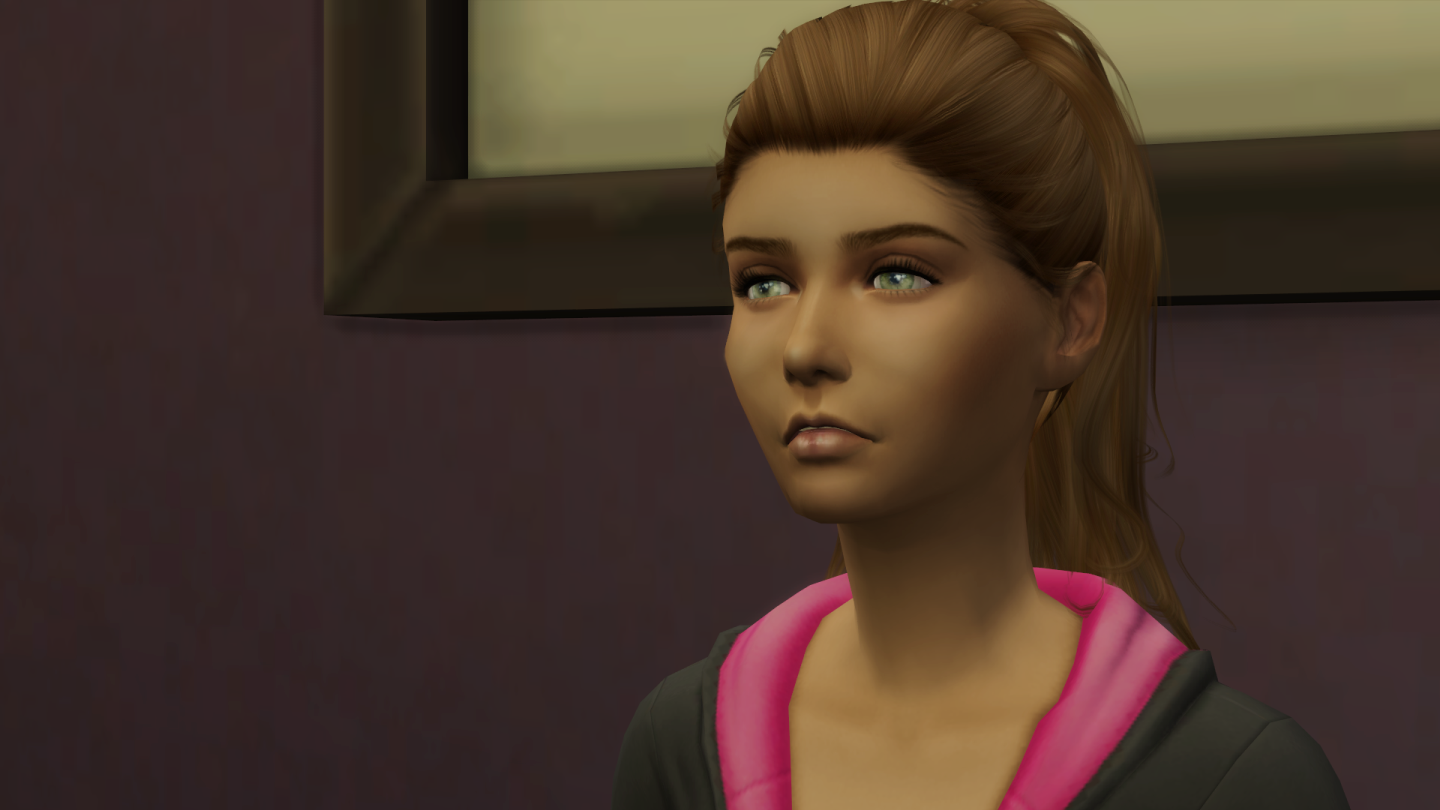 Haven’t we all? she though sarcastically.  She would try anyway.  She did long for Evan’s embrace, the way he touched her, his almost reverent kisses, the way he made love to her, and that sexy as hell grin that gave her goosebumps every time. God, what was she doing? How could she want him so much when he lied to her? Archer is safe, she repeated as a mantra to herself, and he’s been nothing short of sweet and respectful. And she needed safe right now.

Reagan turned to her father and kissed his cheek. “I will Daddy.  Thanks for being understanding.  Sooo, can I stay and watch the movie with you?” 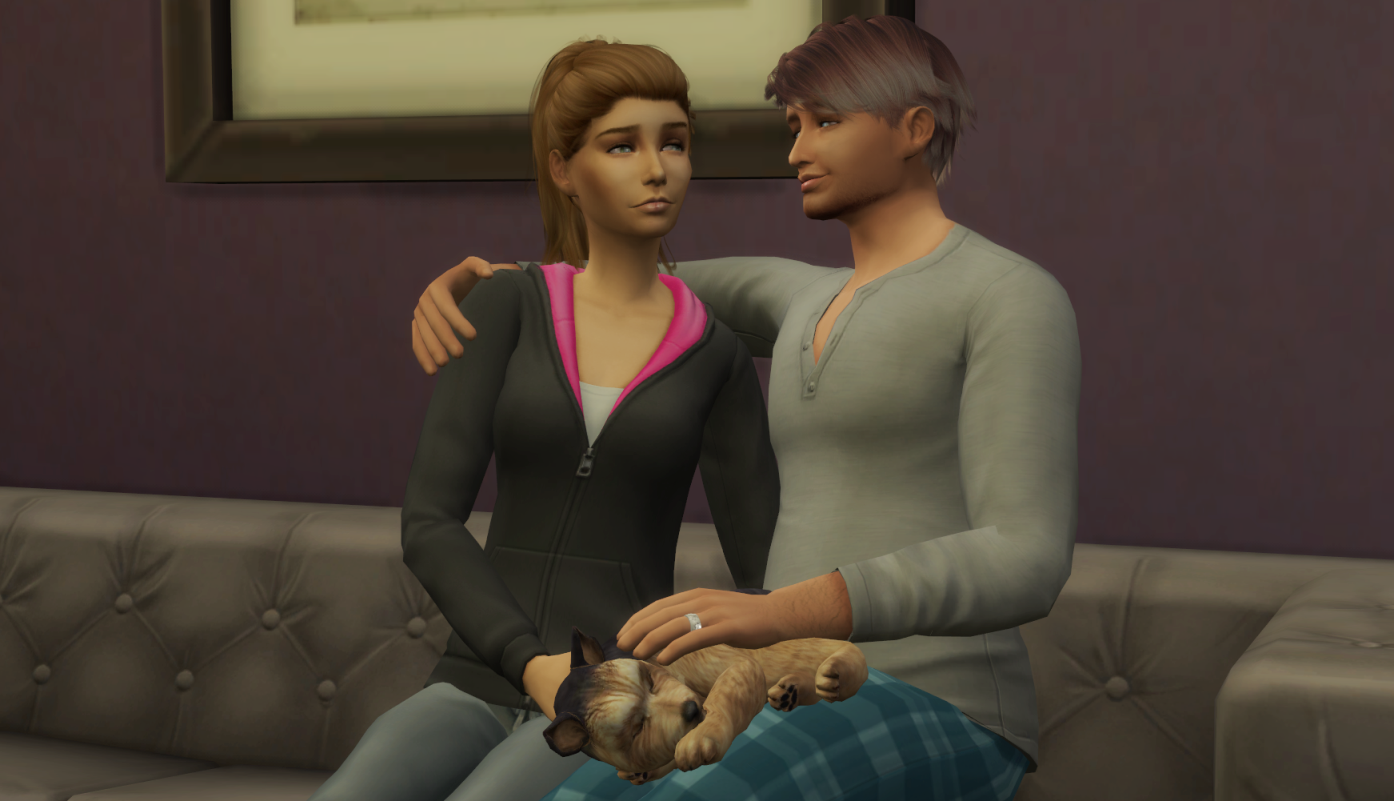 He laughed and pulled her next to him before turning the TV back on. While they watched the movie, his comments about both Archer and Evan kept niggling at her consciousness.  She had to force them back so she could enjoy her last day with her father for the next month. 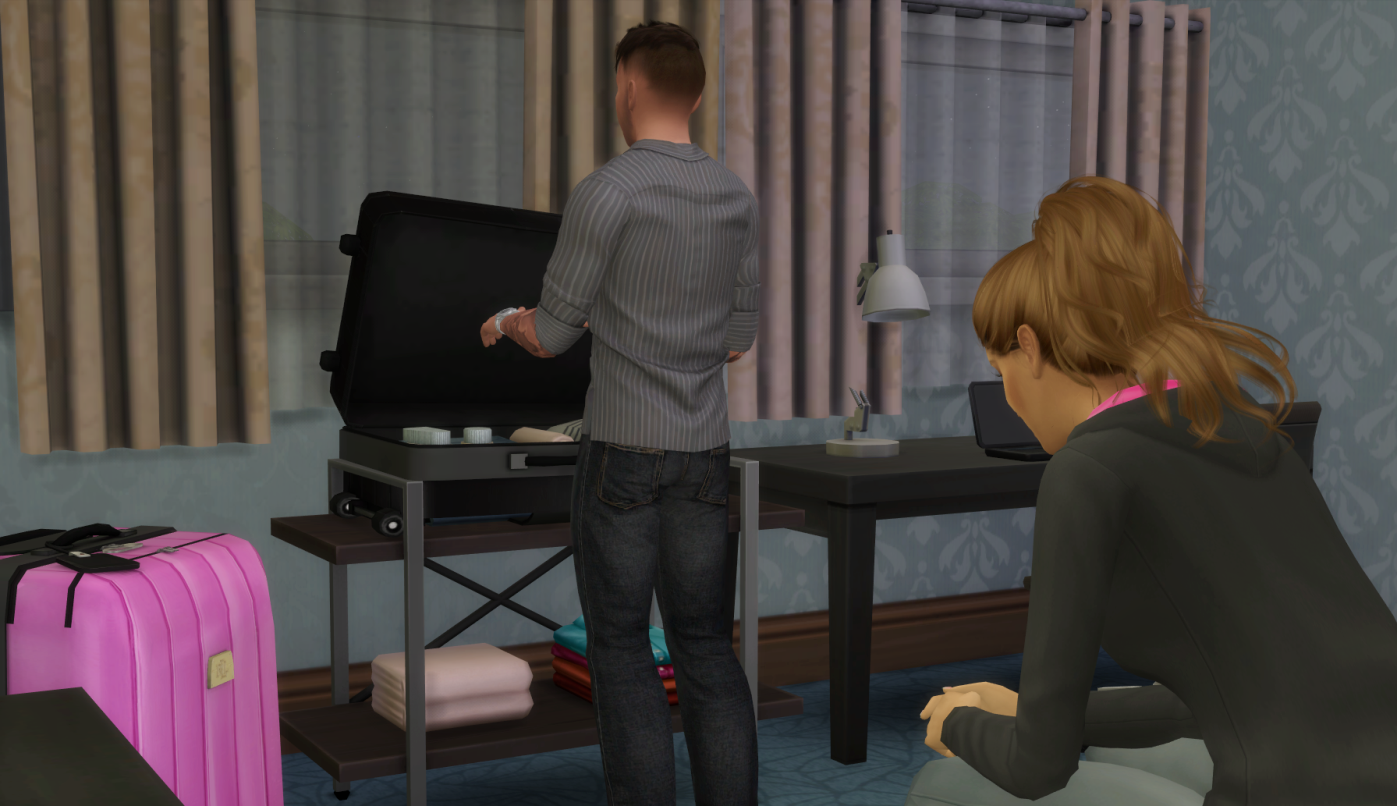 By that evening, everything was settled. Reagan and Archer planned to leave the next morning.  She sat in his hotel room where she’d just hung up with Ryan, telling him her plans, while Archer finished packing.

She figured Ryan wouldn’t be happy and she wasn’t wrong. He felt like she was rebounding from Evan.  He also said Evan loved her and she should give him a chance. Neither he nor her father could understand how painful it was for her to be around him. They should form the ‘Evan Connor Fan Club’ and hang out with him, she thought angrily. 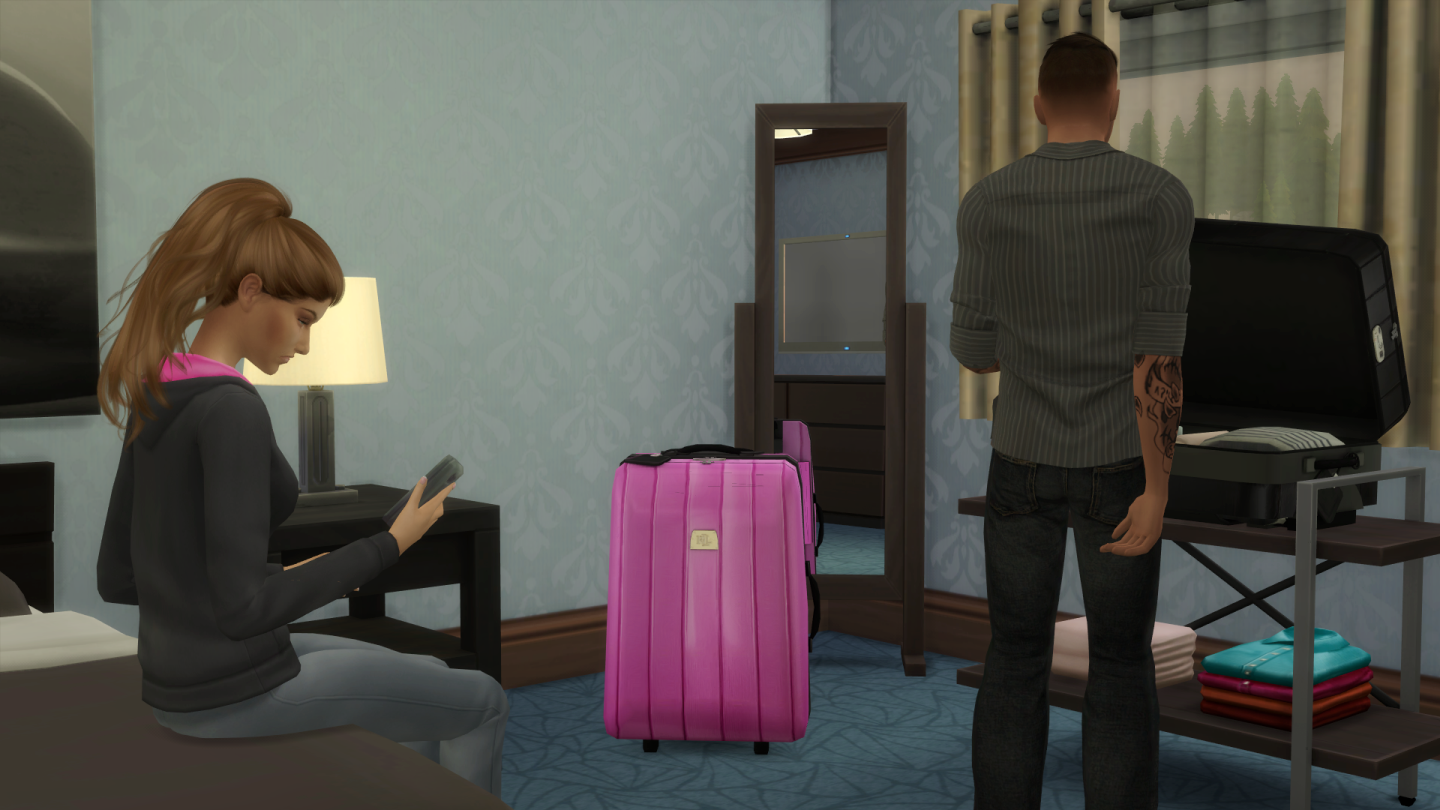 A few minutes later, her phone rang. Evan. She knew Ryan must’ve called him. She should’ve told him she was going to call him. He should’ve heard it from her. Ryan probably didn’t think she would. But she would have, wouldn’t she? She took several deep breaths and answered his call.

“Reagan, please tell me it’s not true.  You’re leaving town with him? And you weren’t even going to tell me?” He sounded so hurt and so sad. She could feel his pain through the phone and it cut her like a knife. 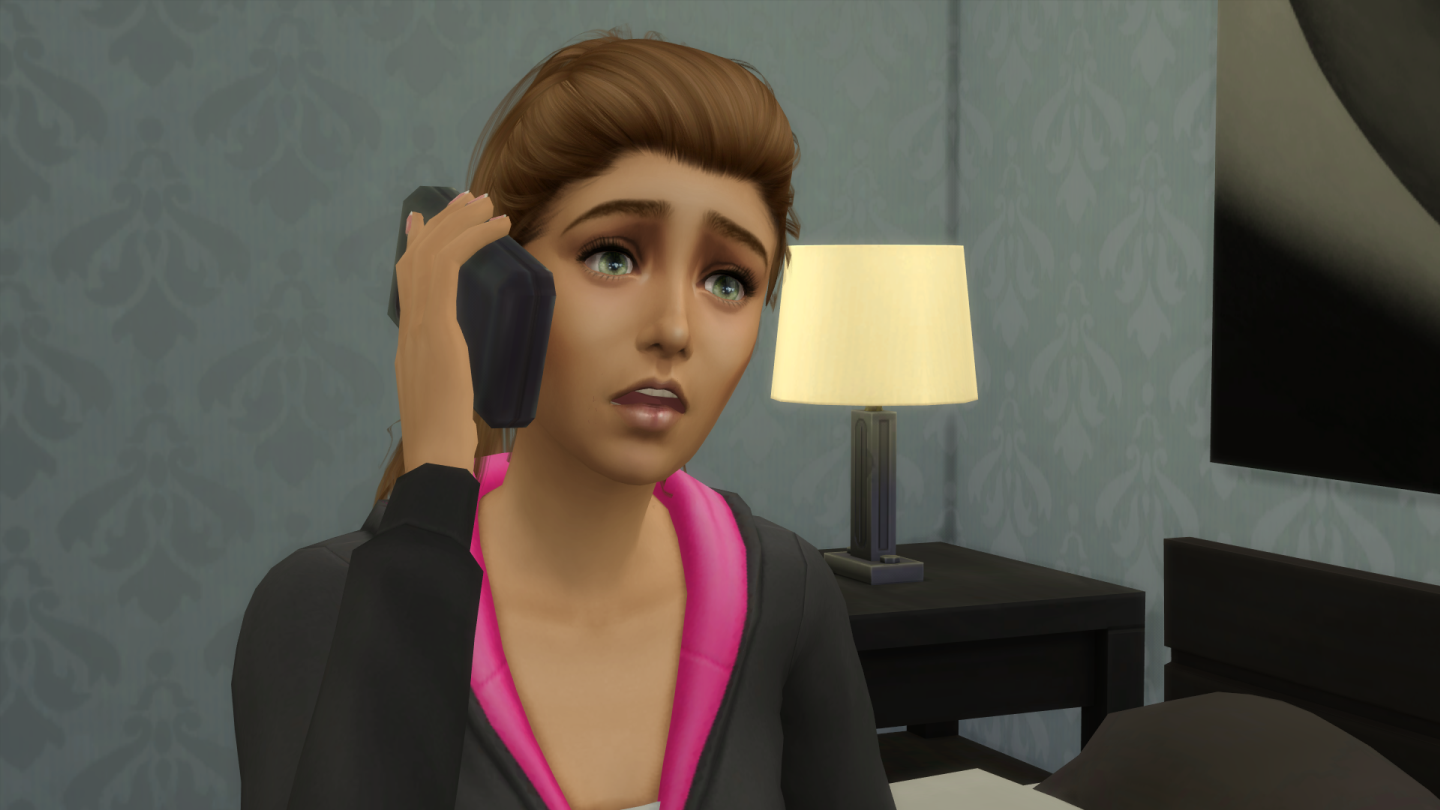 “I promise, I was going to call before I left,” she said gently, “but Evan, I have to get away. I can’t breathe here. Everywhere I go and everything I do reminds me of either you or her. It’s too much.” Reagan began to get emotional. Dammit. That’s exactly what she had to leave.

“You’re running away from me?” His voice was filled with pain. 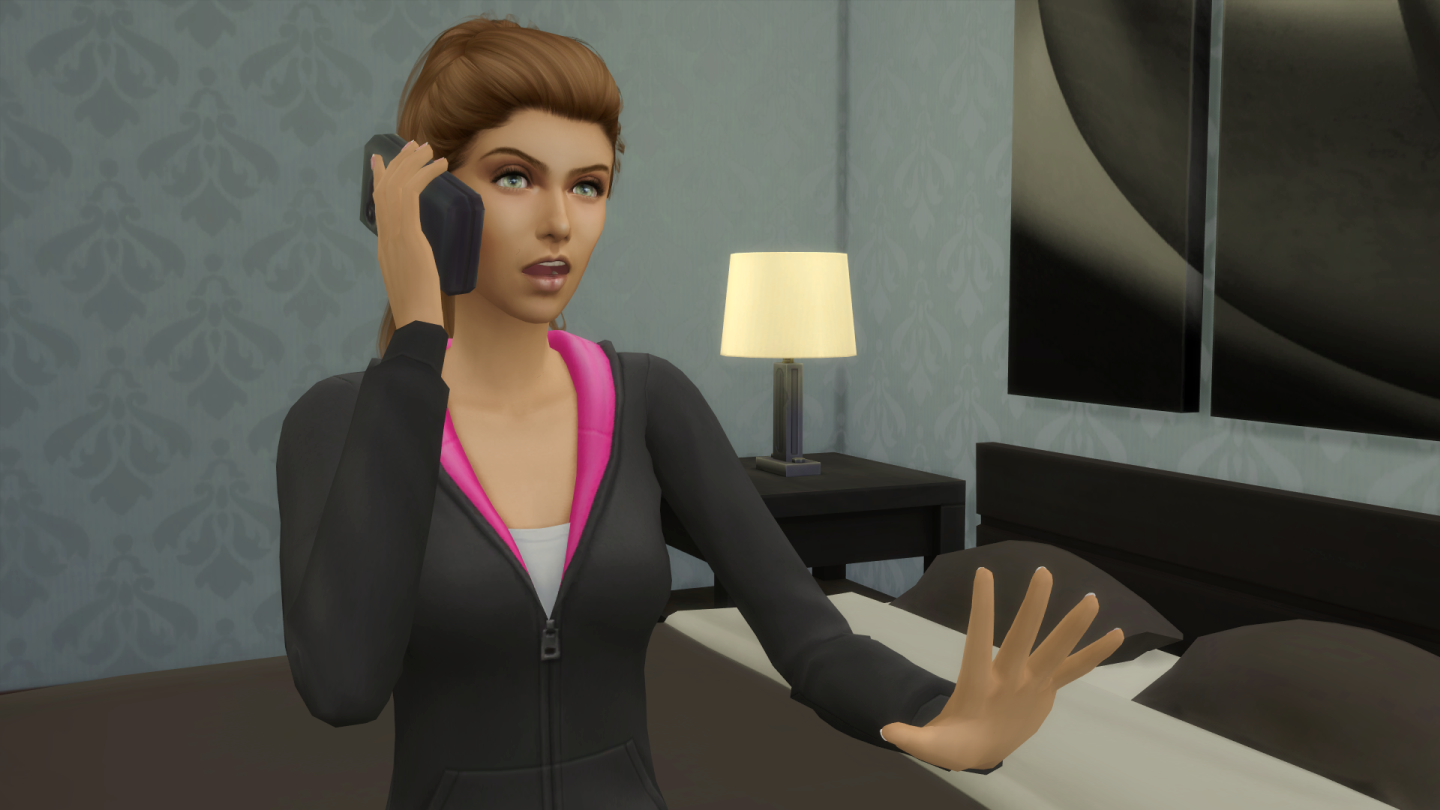 “No Evan. I just need time to think, and I can’t think straight in Newcrest.”

“We never got to have dinner.  Reagan, don’t run. We need to talk. Then maybe you’ll understand. There’s so much left unsaid. Let us try. I want you in my life. And there are things you deserve to know – regardless.” 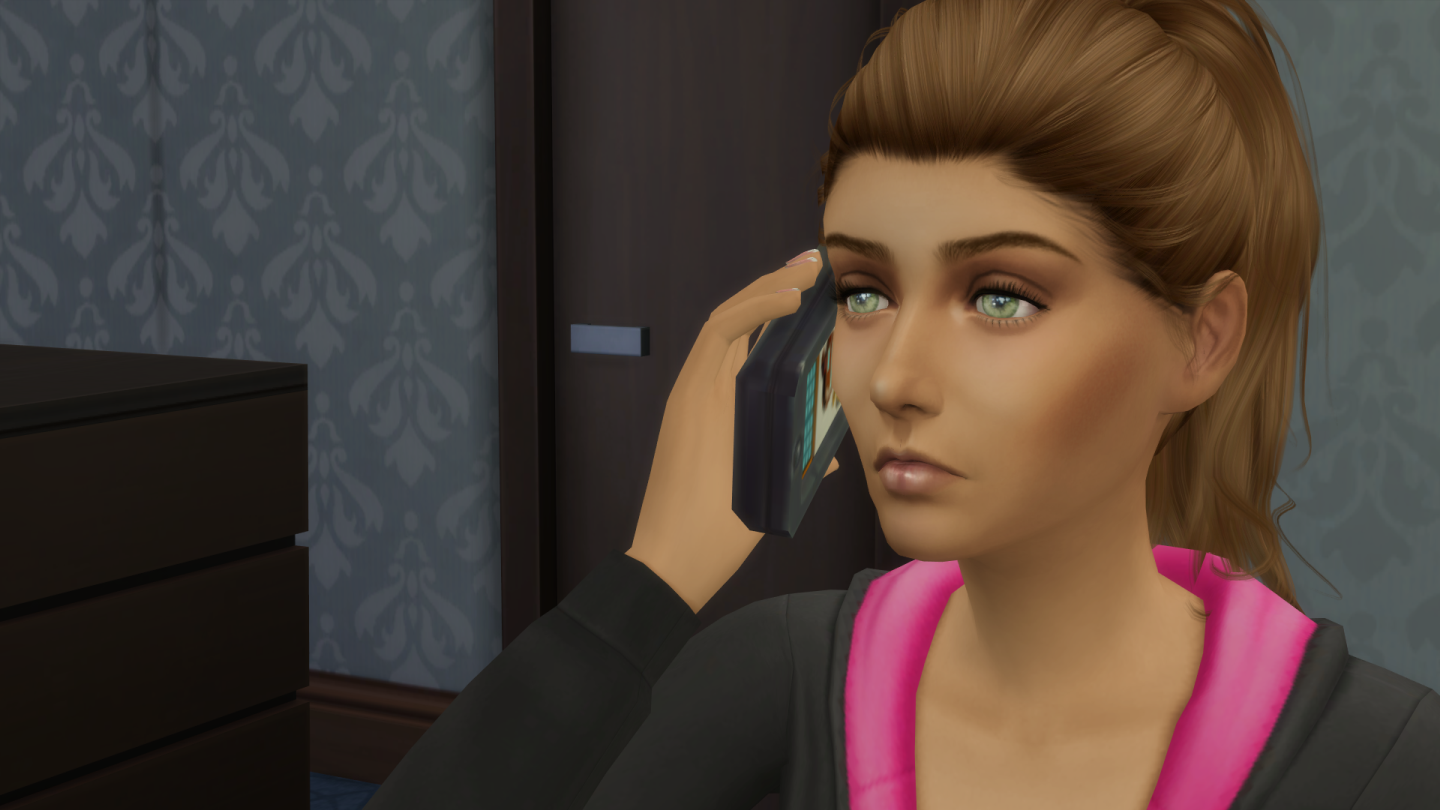 Was he right? Was she was running from him? Or was she running to Archer like her father suggested without saying it? Was Ryan right and Archer was a rebound? But they were only friends. Why did everyone assume otherwise?  All she knew was she needed space away from Evan and Willow Creek. For now anyway. 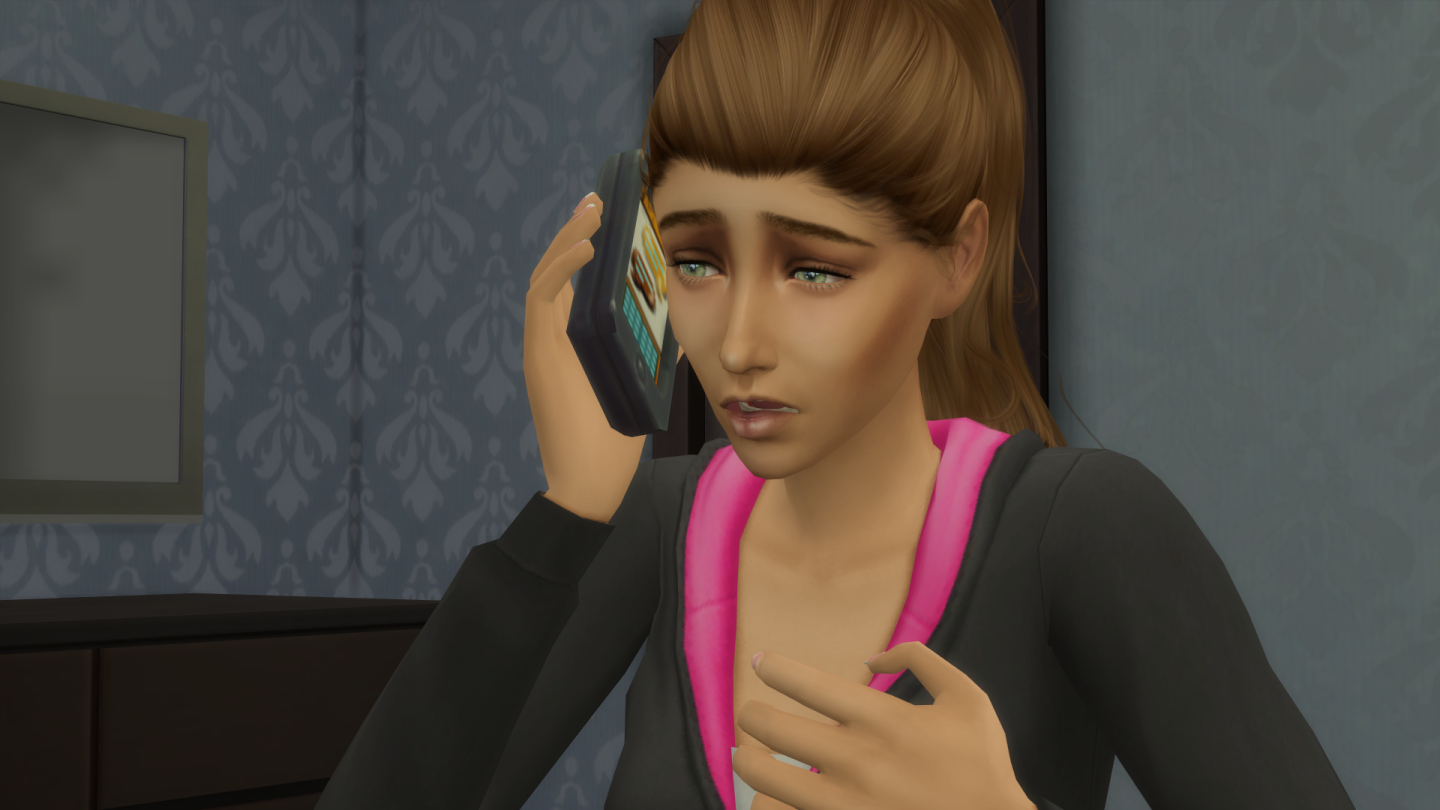 She pulled herself together before responding. “I have to do this, for me. I’m taking a one month leave from work. My grandparents are going to continue to help you and Ami while I’m gone.  I’ll be back Evan.  We can have dinner when I return and can think straight.  So you aren’t surprised, I told Ami to put my house on the market.  I can’t go back inside of it.  Maybe you can help Ami keep an eye out for a new place in Newcrest? I will be back.”

She knew she was rambling, so she stopped talking.  She shouldn’t be asking him to help sell her house.  What was she thinking?  She wasn’t.  That was the problem.

Evan was quiet for a minute and when he spoke his voice was thick with emotion. “I’ll help her with it. Of course I will.  We’ll move your things to storage. I love you Reagan. You love me too. I know you do.” 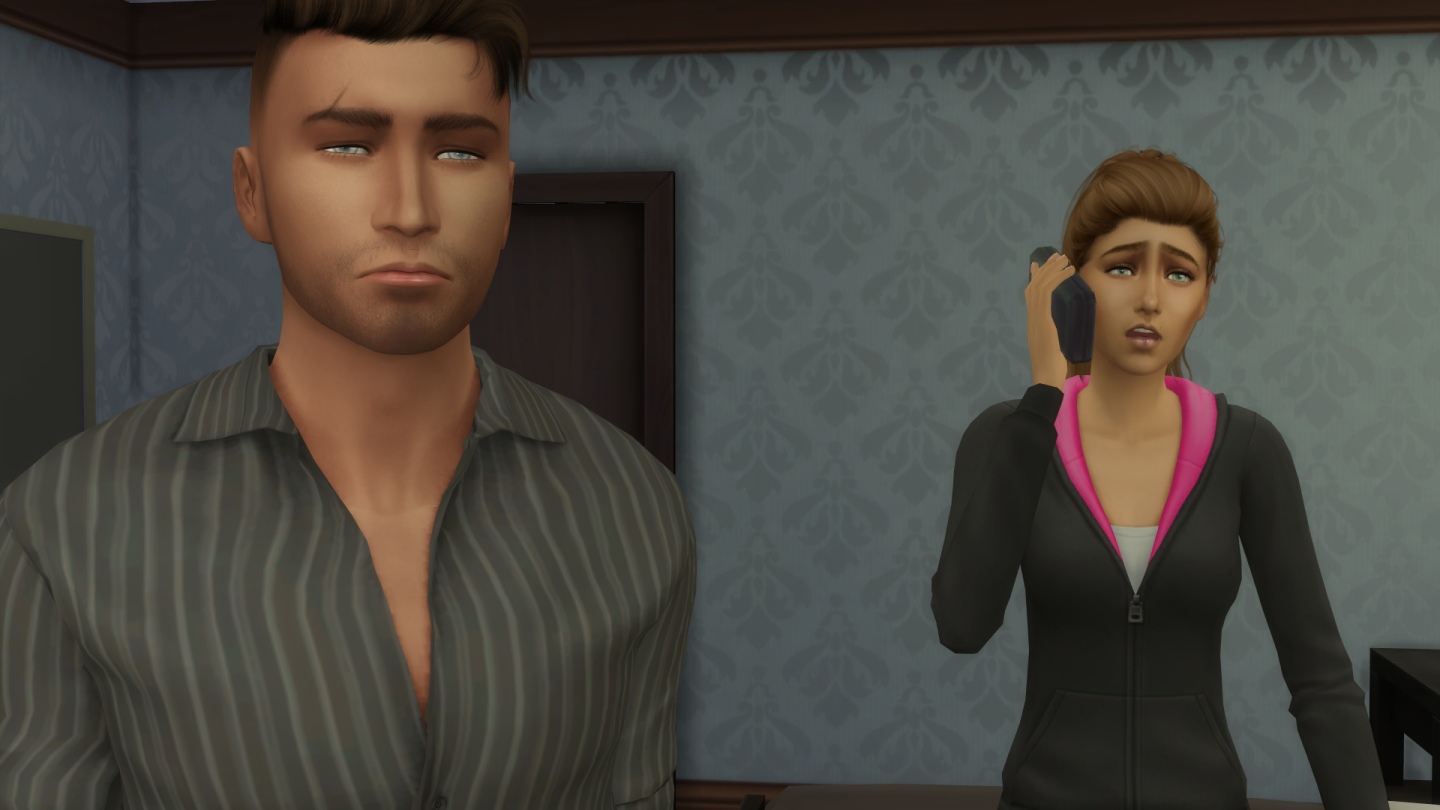 “I’m sorry, but it’s true and I couldn’t let you leave without you hearing it one more time.”

“I have to go. I’ll call you,”  she said and disconnected the call. 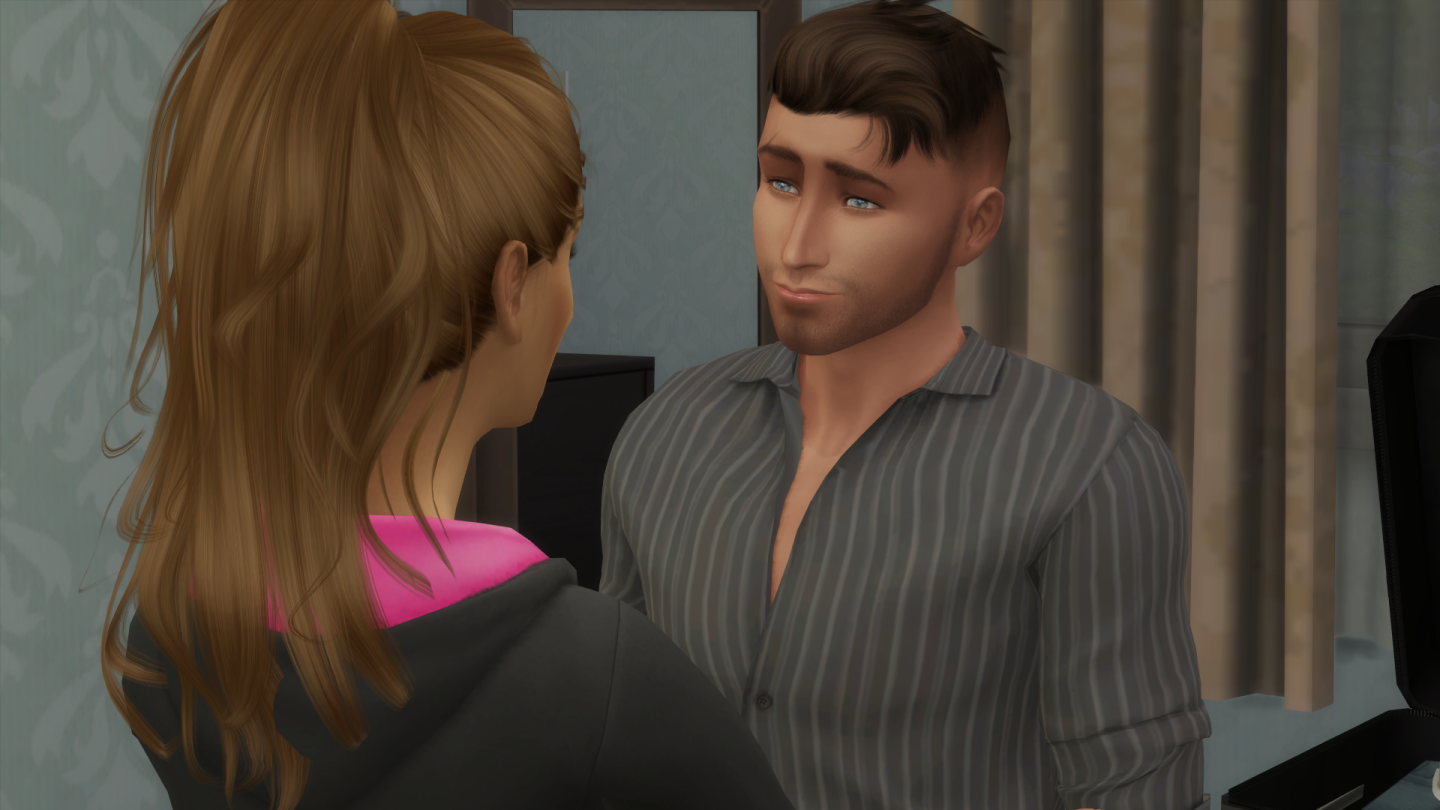 The minute she hung up Archer turned around.  “Reagan, are you okay?”  asked Archer, “I couldn’t help but overhear.”

“Goodbyes suck,” was all she could say.

He put his arms around her. “It’ll be easier once you’re away. Trust me. I know.” 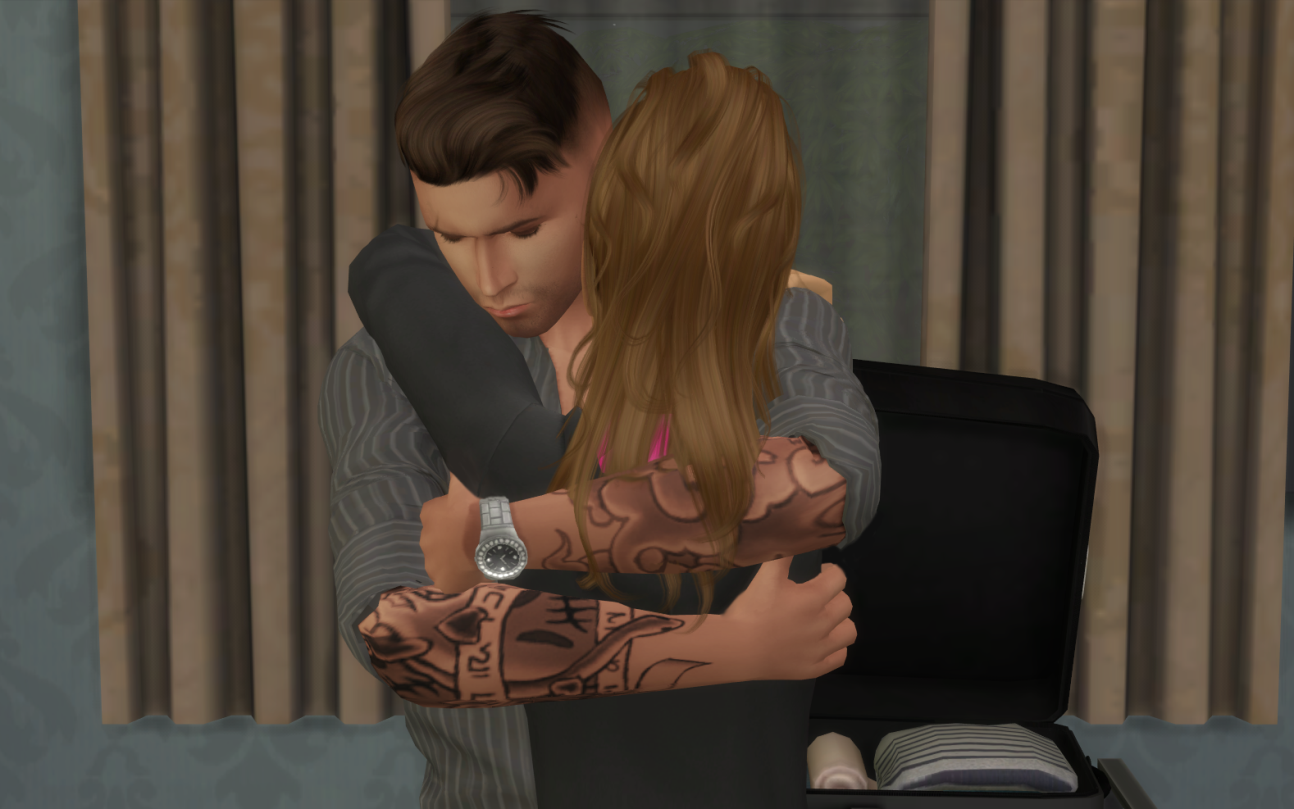 “I hope so,” she said into his chest as he pulled her tight against him, “all of this is just too hard.”